European plans to use apps in virus tracking face setbacks

Doubts were growing on Thursday over whether ambitious plans by European governments to use contact-tracing apps to fight the spread of the coronavirus will be able to be implemented with any real effectiveness soon. 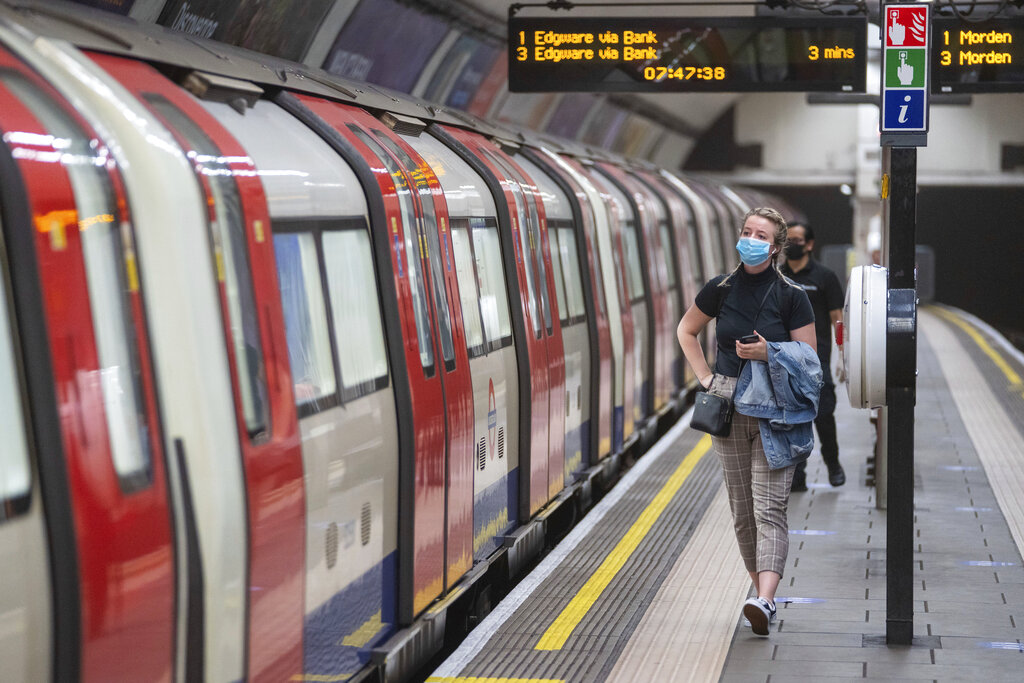 A commuter wearing a protective face mask walks along the platform at Clapham Common underground station, London, as train services increase this week as part of the easing of coronavirus lockdown restrictions, Thursday May 21, 2020. (Photo: AP)

British Prime Minister Boris Johnson pledged Wednesday to have a “test, track and trace” program for COVID-19 in place by June 1 as part of a strategy to persuade the country that it’s safe to move on to the next stage of easing the lockdown and restarting the economy.

But the government also appeared to backtrack on an earlier pledge to make a smart phone app a pillar of that program.

Security minister James Brokenshire told the BBC on Thursday that he remains “confident” that the tracing system will be in place by June 1, but acknowledged that an app intended to help track the virus was not ready. He suggested “technical issues” were the reason for its failure to be introduced as planned by mid-May.

Experts say that being able to quickly identify people exposed to the virus can help stop the spread of the contagious respiratory illness, but efforts to put apps in place have come up across technical problems and fears of privacy intrusions.

The French government has also been forced to delay deployment of its planned contact-tracing app. Initially expected last week as the country started lifting confinement measures, it won’t be ready before next month due to technical issues and concerns over privacy.

Italian Premier Giuseppe Conte said Thursday that the country's contact-tracing app would begin tests “in the coming days.” But he made no mention of whether Italy had hired teams of contact-tracers to actually conduct interviews and get in touch with people who had been in contact with COVID-19 patients, as other European countries have done.

Spain’s Economy Minister, Nadia Calviño, said Wednesday in parliament that Spain is making preparations to test a European Bluetooth-based app at the end of June in the Canary Islands.

But the adoption of the app has taken a back seat to the hiring of old-school human tracers in Spain. The government has said that the technology will be adopted only if it adds value to the tracing efforts that are being deployed by the country’s 17 regional administrations.

Meanwhile, drug maker AstraZeneca said Thursday it has secured the first agreements for 400 million doses of a COVID-19 vaccine that is now being tested at the University of Oxford, one of the most advanced projects in the search for a vaccine.

The Anglo-Swedish company reported it had received more than $1 billion from the U.S. Biomedical Advanced Research and Development Authority for the development, production and delivery of the vaccine, starting this fall.

AstraZeneca CEO Pascal Soriot said the company “will do everything in our power to make this vaccine quickly and widely available.’’

Around the world, the effort to get back to business is raising worries over risks of new infections.

In Italy, one of Europe's worst-hit countries, authorities warned that people are violating social distancing guidelines after a strict lockdown was lifted threatened the country's recovery.

Milan Mayor Giuseppe Sala said he was asking local police to increase patrols of night spots, be more severe in handing out fines and close any bars or restaurants in flagrant violation of the rules.

Cases in Milan, the seat of the hard-hit region of Lombardy, are rising as Italy continues to relax its long lockdown. Since Sunday, there have been 137 new cases in the city of 1.4 million residents.

From meatpacking plants in Colorado to garment factories in Bangladesh, workers are concerned over risks they face as they return to work after shutdowns. The safety questions apply even at the highest levels of the political spectrum.

About 5 million people worldwide have been confirmed infected, and over 328,000 deaths have been recorded. That includes more than 93,000 in the U.S. and around 165,000 in Europe, according to a tally kept by Johns Hopkins University, based on government data. Experts believe the true toll is significantly higher.