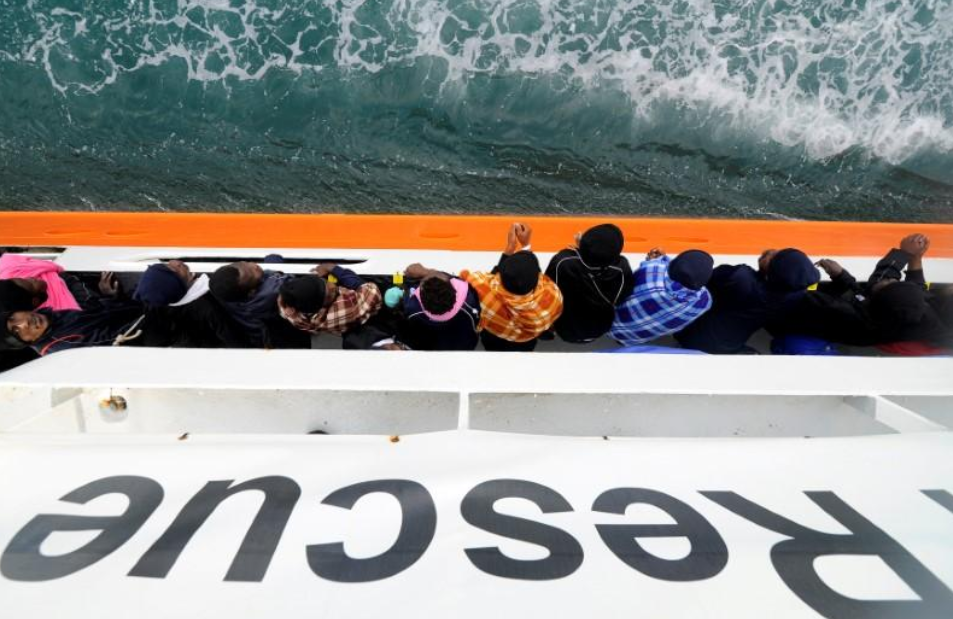 Migrants wait to disembark from Aquarius in the Sicilian harbour of Catania, Italy, May 27, 2018 (Photo: Reuters)

France, Germany, Italy, Austria and other EU states will meet on Sunday to try to end a deadlock on migration policy which has brought to a head bitter political divisions in the bloc.

Sources said Greece and Bulgaria would also attend the gathering, which will explore how to prevent people from moving around the European Union after claiming asylum in one of the Mediterranean states of arrival.

Such secondary movements are illegal under EU law but have been widespread since immigration to Europe peaked in 2015, when more than a million refugees and migrants arrived from the Middle East and Africa.

The bloc has since been bitterly at odds over how to share out the responsibility of taking care of them.

Sunday’s meeting will seek to avert a possible clash on the issue at a June 28-29 EU summit, where leaders will try to agree a joint migration policy.

Austrian Chancellor Sebastian Kurz, an immigration hard-liner who governs in coalition with the far right, said he would push on Sunday for rapid action on migration, and suggested Austria might go it alone on creating asylum centres outside the European Union if the deadlock continued for months.

Europe’s quickening migration diplomacy coincides with an international outcry over the Trump administration’s policy of separating migrant families at the Mexican border, as videos emerged of youngsters held in enclosures far from their parents, and an audio of wailing children went viral.

Immigration is increasingly shaping politics in rich countries even as a report by the Organisation for Economic Co-operation and Development (OECD) said the number of people fleeing war or strife for more stable parts of the world declined significantly in 2017.

Yet in the EU’s wealthiest economy, migration is threatening to wreck German Chancellor Angela Merkel’s relationship with her CDU’s Bavarian sister party, part of her coalition.

The Christian Social Union (CSU) on Monday gave Merkel two weeks to get a Europe-wide deal.

Horst Seehofer, CSU leader and Germany’s interior minister, wants to turn away migrants who have already registered in other EU states. Merkel opposes any unilateral move to reverse her 2015 open-door policy and undermine her authority.

“We can no longer look on as this refugee tourism across Europe happens,” Bavaria’s CSU interior minister, Joachim Herrmann, told German broadcaster Deutschlandfunk.

Pope Francis told Reuters in an interview that populists were “creating psychosis” on the issue of immigration, even as ageing societies like Europe faced “a great demographic winter” and needed more immigrants.

Without immigration, Europe “will become empty”, he said.

But the European Union is bitterly divided. It has struggled to reform its internal asylum rules, which broke down in 2015, and has instead tried to tighten its borders and prevent new arrivals. To that end, it has given aid and money to countries including Turkey, Jordan, Libya and Niger.

Eastern EU states led by Poland and Hungary refuse to host some new arrivals to ease the burden on coastal Italy and Greece and rich countries like Germany where people mostly want to go.

It also proposed looking into creating “regional disembarkation platforms” outside of the EU where asylum requests would be assessed before claimants get to Europe.

Hungary’s parliament meanwhile approved a package of bills that criminalises some help given to illegal immigrants, defying the EU and human rights groups who have called the measure arbitrary and vague.

Denmark and Norway said they were working on creating a centre in Kabul where unaccompanied Afghan minors who have been denied asylum can be sent back.

The UN Children’s Fund UNICEF said minors should not be returned to Afghanistan as security had worsened there.

U.S. President Donald Trump, defending his own tough anti-immigrant polices, waded into Germany’s debate on Monday with a series of tweets criticising Merkel’s open-border policy as a “big mistake” that had fuelled crime in Europe.

The increasing tempo of migration diplomacy coincides with the summer peak season for migrants sailing in small boats from north Africa to Europe’s southern shores.

The Italian Coast Guard ship Diciotti arrived at the Sicilian port of Pozzallo overnight and 519 migrants on board were being disembarked, relief workers said.

They were saved in seven different rescue operations off the Libyan coast, and some spent days at sea as the new Italian government looks to slow the influx of migrants.