By Earle Gale in London | chinadaily.com.cn 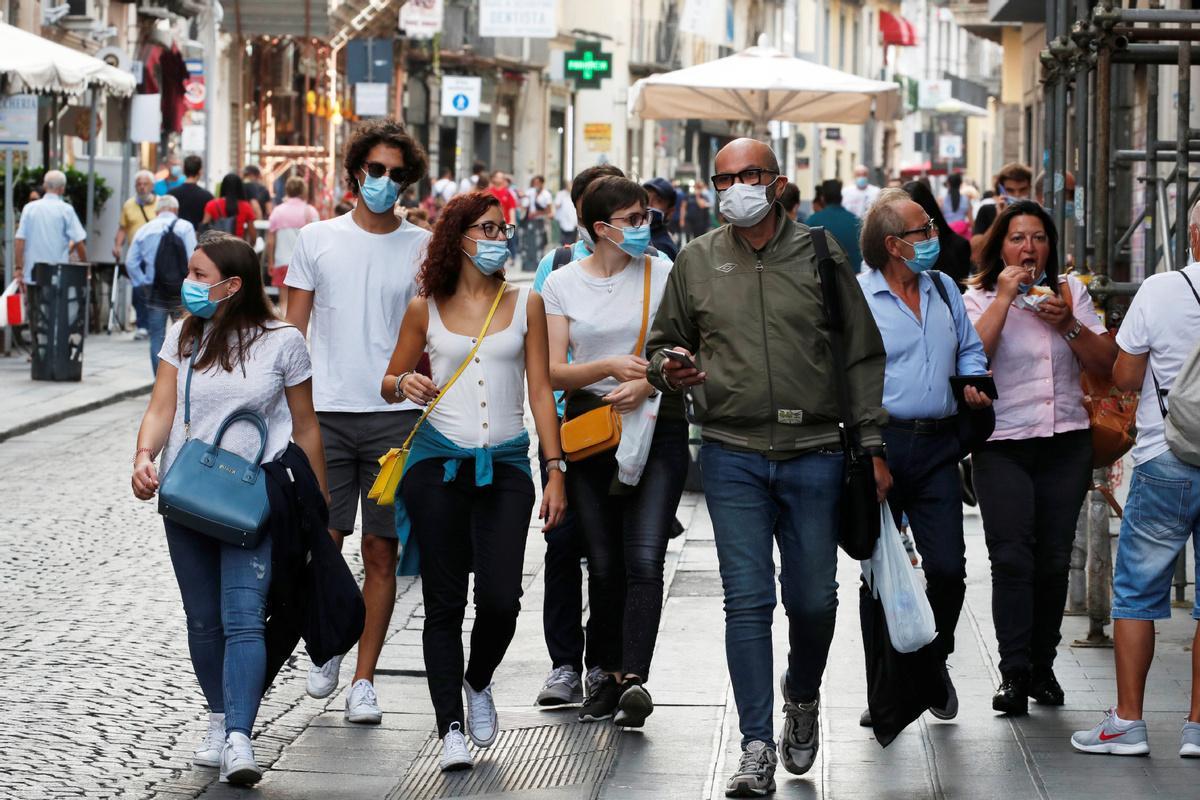 People wear face masks after the southern Italian region of Campania made it mandatory to wear protective face coverings outdoors 24 hours a day, as part of the efforts to contain the coronavirus disease (COVID-19) outbreak, in Naples, Italy, Sept 25, 2020. [Photo/Agencies]

Many Europeans have heard enough about the COVID-19 pandemic and are now so fatigued by the constant vigilance that has been demanded of them that they are letting down their guard, according to new research conducted by the World Health Organization.

The findings show Europeans' willingness to make sacrifices to fight the spread of the virus has now been largely replaced by apathy, something that ties in neatly with skyrocketing rates of infection throughout the continent and quickly increasing death tolls.

ITV News reports that pandemic-fatigue was measured differently in each of the European Union's 27 member nations but that around 60 percent of the population in some parts could now be described as jaded when it comes to the novel coronavirus.

Hans Kluge, the WHO's regional director for Europe, said the organization will introduce strategies to try to counter the phenomenon, including more community consultation and empowering ordinary people to devise "reasonable guidance" for their own environments, something, he says, that has worked in Scandinavia.

"Citizens are at the heart of a solution to the pandemic and policymakers should treat them as such," the broadcaster quoted him as saying.

But while the WHO and European nations are working to counter apathy, the Reuters news agency reports there has been no lack of interest in a United Kingdom project that supports loans to small businesses that are struggling because of the pandemic.

It reports there has been massive demand, and that criminals may have made billions of pounds by exploiting the initiative.

The nation's spending watchdog, the National Audit Office, said the Bounce Back Loan Scheme, which was launched in early May and which facilitates banks loaning individual businesses up to 50,000 pounds ($64,000), has been massively abused.

The National Audit Office said on Wednesday the government, which is underwriting the loans, is likely to end up on the hook for between 15 and 26 billion pounds because of fraud and defaults.

Gareth Davies, the auditor general at the helm of the NAO, said: "Unfortunately, the cost to the taxpayer has the potential to be very high, if the estimated losses turn out to be correct."

The full scale of the losses will not be known until May, when the loans are meant to be repaid.

Meg Hillier, chairman of Parliament's Public Accounts Committee, said the size of the frauds and defaults could represent an "eyewatering loss of public money".

The program was hastily launched in the early days of the UK's COVID-19 lockdown in an effort to protect as many businesses as possible that were facing bankruptcy. Many sectors of the economy have since managed to resume some trading, although the airline industry remains one that continues to reel as a result of the pandemic.

Airlines and holiday operators got a glimmer of hope this week as the first trials began on Thursday for a digital health pass that aims to certify whether would-be airline passengers are free from COVID-19.

The Financial Times said the aviation industry is hoping the health pass will allow operators to get back to something resembling normal after nearly nine months of serious disruption.

The CommonPass project, which is backed by the World Economic Forum, would work anywhere globally and guarantee a traveler does not have the virus, facilitating easier travel.

Steve Morrissey, a regulatory and policy executive at United Airlines, told the Financial Times the trials will be "critical" in developing an alternative to the quarantine and travel restrictions that are in force around the world.

United Airlines and Cathay Pacific Airways are participating in the trials, which will include routes into and out of London, New York, Hong Kong, and Singapore.

The trials start against the backdrop of an apparently worsening pandemic in Europe, with the number of COVID-19 hospital admissions in England increasing by 25 percent in a single day. On Saturday, there were 386 admissions but there were 478 on Sunday, the most recent day for which such information is available.

The Daily Mail newspaper said the sharp rise was the biggest since June 3.

And the number of people on ventilators in the UK also rose sharply, from 259 a week ago to 349 on Sunday. There were also 14,542 new novel coronavirus infections confirmed in the UK on Wednesday, a day on which the deaths of 76 people in a 24-hour period were also confirmed.

The situation is also serious in France where COVID-19 patients are taking up more than 40 percent of intensive care beds in the Paris region and where cases have risen exponentially in recent days.