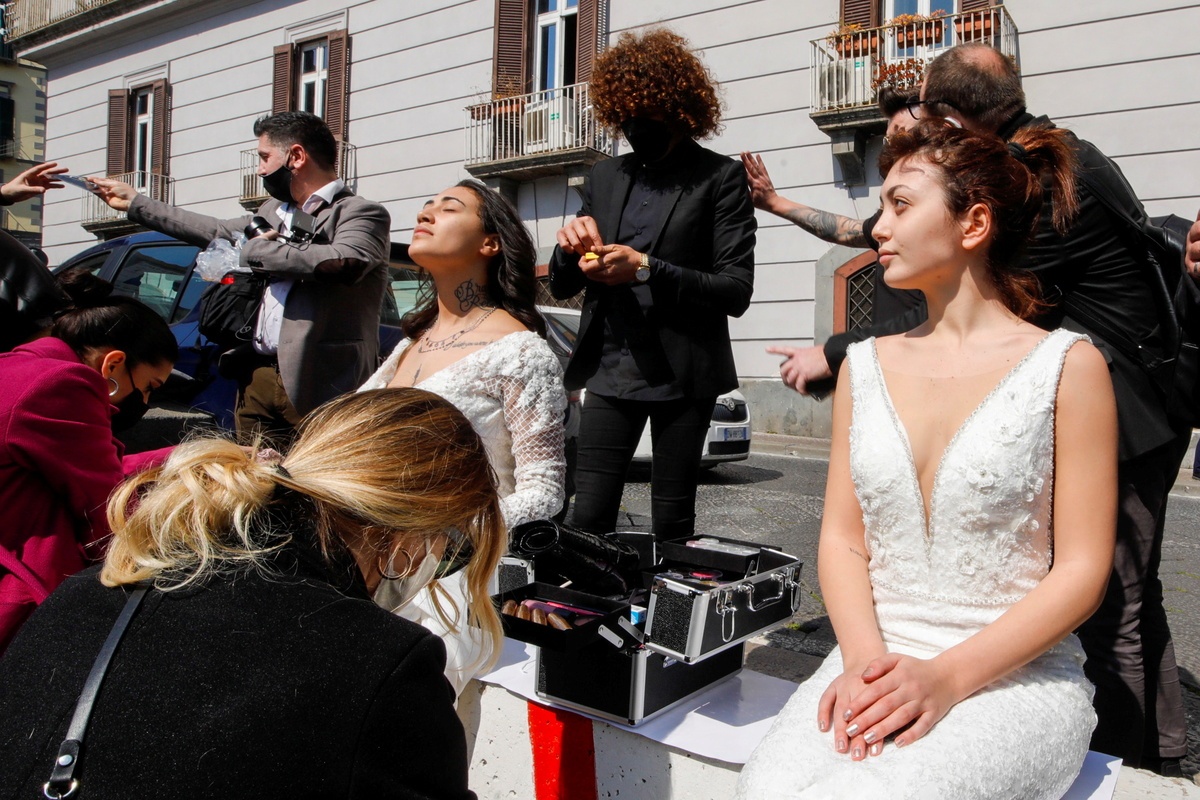 Workers in the beauty industry, including hairdressers and makeup artists, hold a protest in Plebiscito Square against the COVID-19 restrictions in Naples, Italy, on Friday. (Photo: Agencies)

PARIS－France, Belgium and Poland became the latest countries to tighten curbs as coronavirus cases surged in Europe, while the world health body appealed to richer nations to donate vaccines to help poorer ones start their inoculation campaigns.

France on Saturday admitted the situation is critical and added three more regions to the 16 already under tight restrictions. Some 20 million people in France, including the greater Paris region, are classed as living in high-infection zones.

They are not allowed to travel further than 10 kilometers from home without an essential reason.

Daily cases in France have nearly doubled since the start of the month, and there have been more than 200,000 new cases every week. But that did not stop a crowd turning out for a protest concert outdoors in central Paris on Saturday evening.

Numbers in France's intensive care wards are close to the record highs reached in November, and they are still climbing.

After a popular backlash and legal hurdles, German Chancellor Angela Merkel was forced to ditch plans for an extended Easter holiday lockdown intended to try to break a third wave of COVID-19. But Helge Braun, a top aide to Merkel said it remained imperative to reduce the number of infections.

In stark contrast, British people are relishing the prospect of a pint and a haircut as Prime Minister Boris Johnson vows to stick to his plan to unwind anti-COVID measures.

Italy will reopen schools for younger students and ease the lockdown on Rome and its surrounding region, the government announced on Friday.

Classes for the lower grades will reopen countrywide, even in higher-risk regions still classified as "red" under the most severe restrictions. The change will come into effect after the Easter holidays.

Italy was the first country in Europe to face the full force of the pandemic.

Health officials have rolled out more than 510 million coronavirus vaccine doses around the world, but with big gaps between countries. The World Health Organization on Friday appealed to richer nations to donate vaccines to help poorer ones begin vaccination drives.

The deployment of vaccines has been glaringly unequal, with the United States accounting for more than a quarter of the global total and poorer countries lagging far behind wealthier ones.

The agency has especially slammed rich countries, saying they are directly responsible for the deaths of high-risk people in low- and middle-income countries, USA Today reported on Thursday.

"Countries that are now vaccinating younger, healthy people at low risk of disease are doing so at the cost of the lives of health workers, older people and other at-risk groups in other countries," the report quoted WHO Director-General Tedros Adhanom Ghebreyesus as saying at a news conference last week.