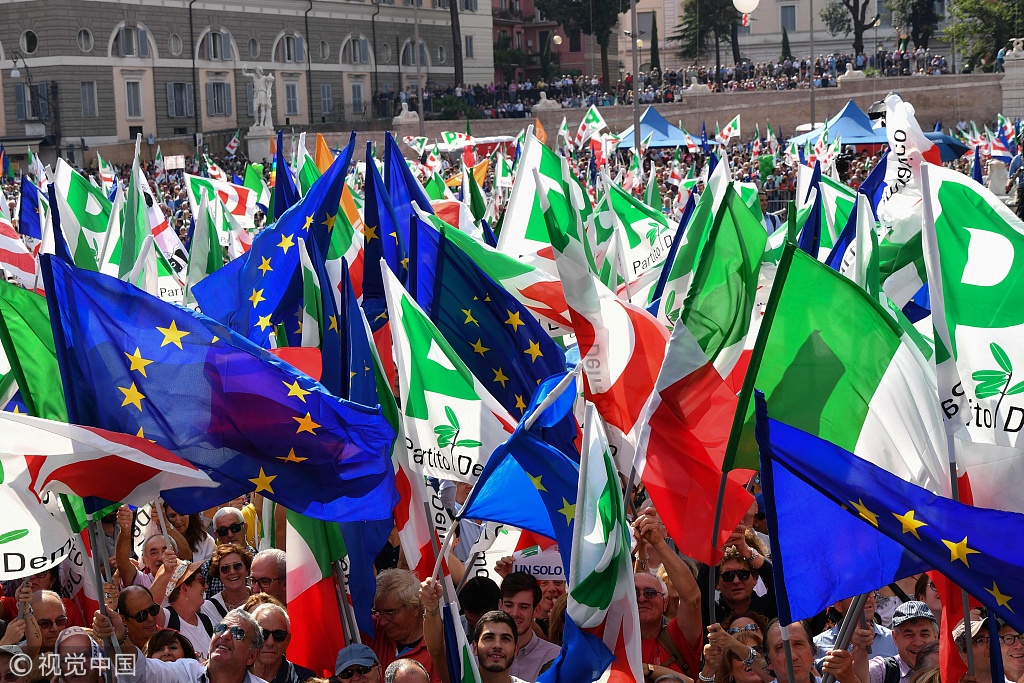 Supporters of Italy's centre-left Democratic Party (PD) wave party flags and flags of the European Union as they gather for a rally on Piazza del Popolo in downtown Rome to protest the government policies, on September 30, 2018. (Photo: VCG)

The war of words took place just days after Rome announced a big spending boost in defiance of the European Union that has spooked the markets and has EU capitals fearing a return of the debt crisis.

"I'm somewhat less optimistic after having talks with colleagues than beforehand," said Dutch Finance Minister Wopke Hoekstra after a meeting with his eurozone counterparts on the issue.

"If this was meant to test the water, then it seems like work has still to be done," he added.

The fragile state of Italy's economy has reawakened memories of the crisis amid dangers that Rome could face punitive measures by its EU partners if it insisted on breaking the bloc rules on running excessive deficits and high debt.

Fallout from the budget plans shook markets again on Monday, with the closely-watched "spread" between the rates on 10-year debt paid by Italy compared with those offered by Germany hitting a month high.

"It is up to the Italian government to show that it has a sustainable and credible budgetary plan," said Eurogroup chief Mario Centeno, who is also Portuguese finance minister.

Italy on Thursday drafted a budget that raises spending, pushes the public deficit to around 2.4 percent of gross domestic product and that will hike the public debt above its already sky high level of 131 percent of GDP.

The previous government was aiming for a deficit of 0.8 percent of GDP that would help cut debt though possibly hamper economic growth.

"I just want to make very clear that there are rules and the rules are the same for every state because our futures are linked," said French Finance Minister Bruno Le Maire.

Given the growing worry, Le Maire and Hoekstra had requested that Italy be put on the agenda, sources said.

In the talks sources said Italian Finance Minister Giovanni Tria struggled to defend Rome's budget plan amid rumours that he had recently considered resigning on objections to his government's tough stance.

Tria urged his European partners to "stay calm" ahead of the sitdown in Luxembourg.

"I will try to explain what is happening and our intentions," he said.