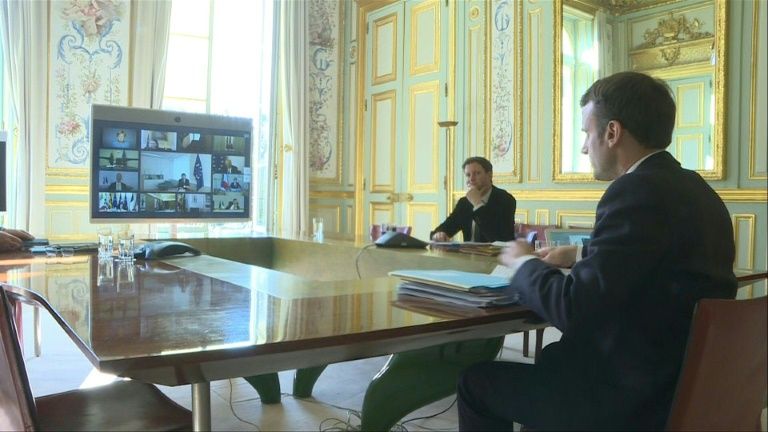 French President Emmanuel Macron takes part in a videoconference with European leaders to try to find a common response to the coronavirus crisis. (Photo: AFP)

EU leaders on Thursday gave eurozone finance ministers a fortnight to come up with a stronger response to the economic havoc wrought by the coronavirus pandemic.

During six hours of fraught summit haggling by video conference, the 27 leaders struggled to agree a unified response to the COVID-19 crisis.

Nine countries, including hardest-hit Italy and Spain, had pleaded in a letter ahead of the summit for "corona bonds", pooled borrowing to cushion the economic blow of the virus, which has sent economies into hibernation and markets into chaotic flux.

But the call was given short shrift by wealthy northern countries and instead a summit declaration tasked the Eurogroup of single currency zone finance ministers with coming up with options within two weeks.

"These proposals should take into account the unprecedented nature of the COVID-19 shock affecting all our countries and our response will be stepped up, as necessary, with further action in an inclusive way, in light of developments, in order to deliver a comprehensive response," the summit statement said.

‘Adapted to a war'

The talks dragged on as Madrid and Rome blocked the statement, holding out for a stronger response.

According to Prime Minister Giuseppe Conte's office, the Italian leader wanted a "strong and sufficient" financial response that would deploy "innovative financial instruments truly adapted to a war".

And Spain's Prime Minister Pedro Sanchez warned: "If we do not propose a unified, powerful and effective response to this economic crisis now, not only will the impact be harder, but its effects will last longer and we will be jeopardising the whole European project.

"We cannot make the same mistakes of the 2008 financial crisis, which sowed seeds of disaffection and division with the European project and caused the rise of populism. We must learn that lesson," he said, in a statement that recalled "the need to work on a common debt instrument issued by a European institution to raise funds on the market."

But northern countries led by Germany and the Netherlands were against what they see as efforts by their southern neighbours to push their long-standing demands for eurozone members to pool public debt.

"We are against it, but it's not just us, and I cannot forsee any circumstances in which we would change that position," Rutte said.

Rutte and Merkel both pointed to existing crisis tools such as the European Stability Mechanism as more suitable to the task.

At a videoconference last week, Conte suggested the creation of corona bonds to pool the debt of the 19 countries in the eurozone.

France, Spain and Italy have long called for some kind of eurobond that would in effect allow joint borrowing by the 19 members of the euro single currency.

They say it could serve as the bedrock of a safer and more unified European economy and would become a globally respected asset on par with US Treasury bills.

But sceptics see the eurobond as an attempt by over-spending southerners to take advantage of the cheap borrowing rates enjoyed by Germany and other paragons of balanced budgets.

'There for each other'

Meanwhile, many millions of the bloc's citizens are holed up at home, during lockdowns imposed to help slow the pandemic that has killed more than 15,000 Europeans and crippled business.

"When Europe really needed to be there for each other, too many initially looked out for themselves," European Commission chief Ursula von der Leyen said ahead of the talks.

"When Europe really needed an 'all for one' spirit, too many initially gave an 'only for me' response," she added, speaking at a sparsely attended session of the European Parliament.

The summit statement said measures should include building an emergency stock of medical equipment and easing inter-EU border closures.

The leaders also rubber stamped the suspension of EU deficit rules to allow countries to spend freely to fight the virus regardless of, in some cases, already yawning budget deficits.

The 27 leaders tasked EU officials to work on an "exit strategy" and recovery plan to help rebuild the economy after the havoc wrought by COVID-19 and the drastic measures taken to fight it.