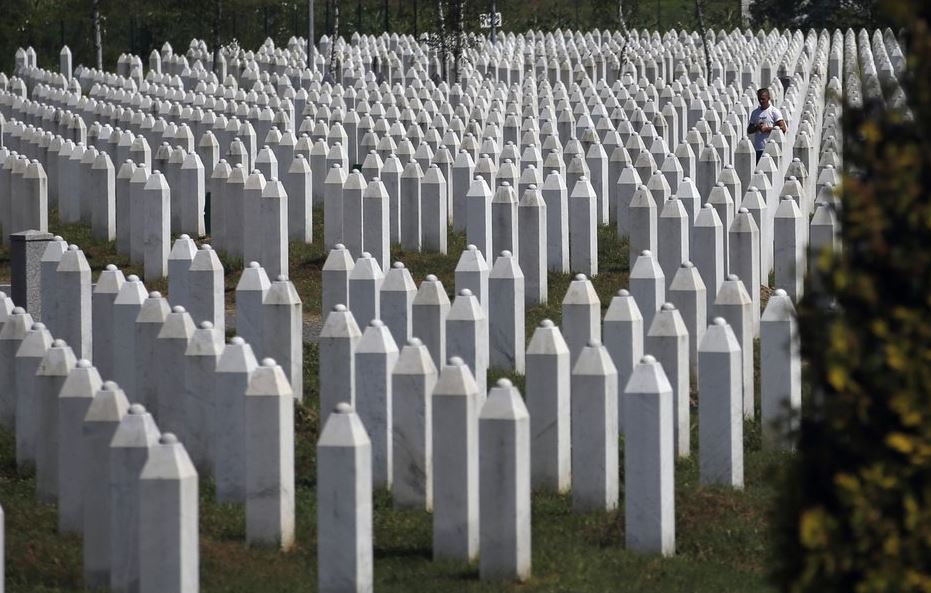 A man prays among gravestones at the memorial centre of Potocari near Srebrenica, 150 kms north east of Sarajevo, Bosnia in Aug. 2018. (File photo: AP)

Bosnia’s war crimes prosecutor on Tuesday charged a former Bosnian Serb general with aiding genocide in the 1995 massacre at the eastern Bosnian town of Srebrenica.

More than 8,000 Bosnian Muslim men and boys were killed when Bosnian Serb troops captured the UN-protected enclave of Srebrenica in July 1995 during the Bosnian war.

The massacre has been described as genocide by two international courts and is considered the worst crime in Europe since World War II.

The prosecutor’s statement said Milomir Savcic willfully aided ex-Bosnian Serb army commander Ratko Mladic and others during the Srebrenica massacre. He is accused of commanding troops to capture, imprison and kill hundreds of Bosnian Muslims at several locations near Srebrenica

“The accused ... is charged with committing a criminal act of aiding in genocide,” the prosecutor said.

Savcic denied the charges in a statement on Bosnian Serb television. He said his troops captured 28 Bosnian army members in July 1995 in the area of Nova Kasaba, near Srebrenica, and handed them over to another unit.

’’I am charged with something that didn’t happen,″ he said.

After the slaughter in Srebrenica, Bosnian Serbs buried their victims in mass graves around the town. Experts are still unearthing those remains.

Savcic, 60, holds both Bosnian and Serbian citizenship, the statement said. It did not say if he was in custody. He also heads the Bosnian Serb war veterans’ association.

Several top Serb officials and military commanders have been sentenced to lengthy prison terms for the Srebrenica massacre by a UN war crimes tribunal in the Netherlands.