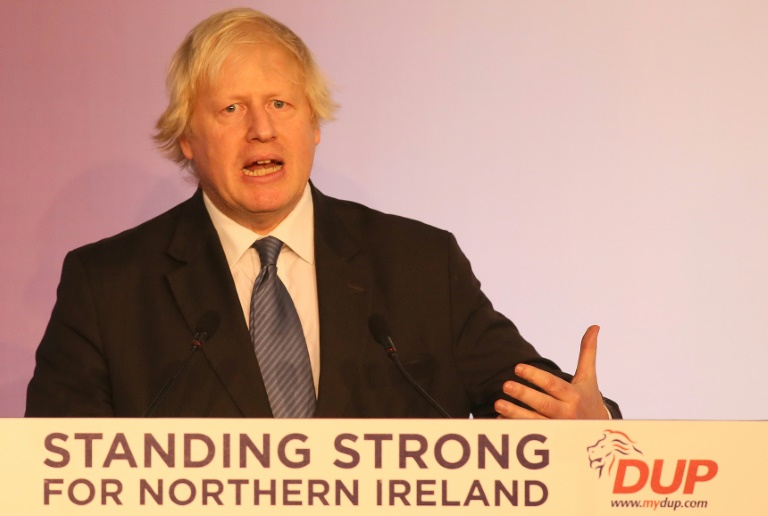 Johnson used a speech at the annual gathering of the Democratic Unionist Party -- the day before a special EU summit to sign off the agreement -- to deliver a blistering attack.

"The Titanic springs to mind and now is the time to point out the iceberg ahead," said the former foreign minister, who resigned from the cabinet in July in protest at May's Brexit approach.

Johnson said that a contentious "backstop" plan for Northern Ireland, which if used would keep the British-ruled province more closely aligned with the EU in certain areas after a 21-month transition period, would leave it "an economic semi-colony" of the bloc.

"No British Conservative government could or should sign up to any such arrangement," he said.

He and the DUP -- the Northern Irish party whose support is vital to May's government and EU exit plans -- have pledged to oppose the deal when it comes before the UK parliament next month, where May faces an uphill task to get it passed.

However that support -- secured with £1.0 billion (1.1 billion euros, $1.3 billion) in extra funding for Northern Ireland -- is now endangered by the draft deal for future ties with the EU after Britain departs the bloc next March.

'Not in national interest'

Speaking after Johnson, party leader Arlene Foster said May's plan "fails her own key commitments" and was "not in the national interest".

"The choice is not between this deal and no deal despite what the Government spin machine may say," she said.

"The reality is that if we are to secure a better outcome than is currently on offer then the only option is to look beyond this current draft withdrawal agreement," she added.

In a warning shot to May earlier this week, the DUP withdrew its support for government legislation.

Deputy leader Nigel Dodds warned again Saturday there would be "consequences" if May continued to pursue the current deal and the party's support was "a two way street".

But in a possible conciliatory offer, he added: "It is in the interests of the country and of Northern Ireland that our parties continue to work together in the national interest".

In a sign of the DUP's pivotal role, British finance minister Philip Hammond also attended the conference on Friday.

"We do not want a border down the Irish sea," said Sam Cole, a local party politician.

"We want the United Kingdom to go ahead as one nation -- and we're part of that nation, have been from our foundation."

The DUP has fought bitterly to prevent closer ties with its southern neighbour Ireland, opposing the 1998 Good Friday Agreement that formally ended the decades-long Troubles and increased cross-border cooperation.

The self-styled "Christian fundamentalist" party with an uncompromising reputation has softened its fiery anti-Catholicism and other harsh stances since it was founded by Protestant evangelical minister Ian Paisley in 1971.

But it remains staunchly in favour of continued British rule in Northern Ireland and backed Brexit heavily in the 2016 referendum -- despite the province voting to remain by a majority of 56 to 44 percent.

The party has faced public concern there about the prospect of a new hard border undercutting trade and evoking memories of decades of sectarian conflict, but remains vehemently in favour of leaving EU.

Its increased influence at Westminster has prompted warnings it has disrupted the delicate balance of power in Belfast, harming the fragile peace.

Irish republicans Sinn Fein have blamed the DUP-May London power deal for the failure to restart a power-sharing executive with the DUP in Northern Ireland.

That arrangement collapsed in January 2017 because of a row over Foster's handling of a botched renewable heating funding scheme.