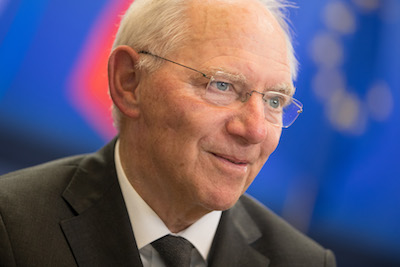 BERLIN, Oct. 24 (Xinhua) -- Ex-Finance Minister Wolfang Schaeuble (CDU) has been elected as the president of Germany's new Federal Parliament (Bundestag) during its constituting session on Tuesday.

A total of 501 out of the 704 delegate votes were cast in favor of Schaeuble. In his subsequent election speech, Schaeuble described himself as a "passionate parliamentarian". The veteran CDU politician further warned against a sharpening of tones in public debate and the resulting challenge to Germany's democratic institutions.

Citing philosopher Immanuel Kant, Schaeuble called on delegates to follow the "categorical imperative" to always act in line with principles which could be generalized as a moral framework for the wider population.

Early into the session, however the AfD launched an unsuccessful motion to prevent Herrmann-Otto Solms (FDP) from opening and presiding over the parliament as its interim chairman by seniority.

The AfD complained about the abandonment of a historical practice of handing the post in question to the oldest member of parliament, as opposed to the member with the longest record of service as a delegate. The far-right party is represented in the Federal Parliament for the first time after securing 12.6 percent of the vote in elections on Sept. 24.

According to AfD delegate Bernd Baumann this change under the "Lex AfD" in the last parliament discriminated unfairly against his party.

"That was a trick which they used to exclude the AfD" Baumann complained. He warned that the "people had spoken" on Sept. 24 and that a "new epoch" in German politics had now begun.