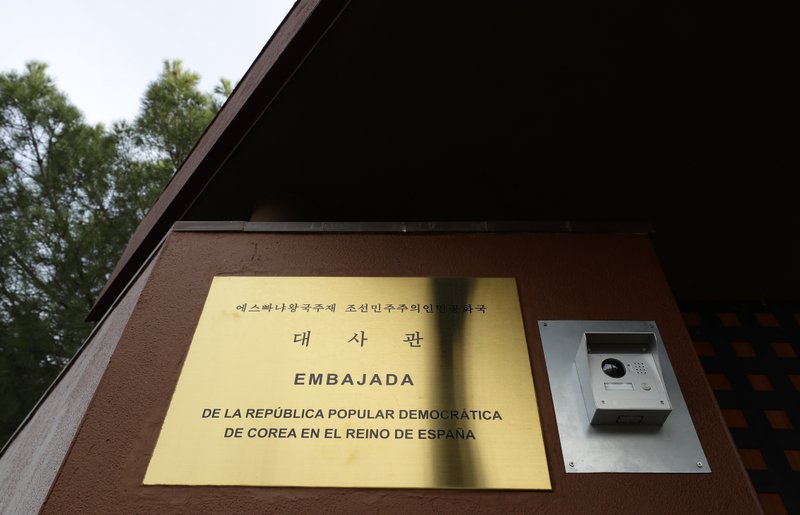 A man suspected of involvement in a mysterious dissident group’s February raid on North Korea’s Embassy in Madrid was arrested in Los Angeles by US authorities.

Christopher Ahn, a former US Marine, was arrested and charged Friday, according to a person familiar with the matter. The specific charges against Ahn were not immediately clear.

The person could not discuss the matter publicly and spoke to The Associated Press on condition of anonymity.

Separately, on Thursday, federal agents raided the apartment of Adrian Hong, a leader of the Free Joseon group, the person said. Hong was not arrested.

Free Joseon, also known as the Cheollima Civil Defense group, styles itself as a government-in-exile dedicated to toppling the ruling Kim family dynasty in North Korea.

The group said it consists of North Korean defectors living in countries around the world, but that it has not worked with or contacted defectors “living under tight security” in South Korea.

Lee Wolosky, a lawyer for the group, said in a statement that he was “dismayed that the US Department of Justice has decided to execute warrants against US persons that derive from criminal complaints filed by the North Korean regime.”

“The last US citizen who fell into the custody of the Kim regime returned home maimed from torture and did not survive,” Wolosky said, referring to college student Otto Warmbier’s 2017 death.

“We have received no assurances from the US government about the safety and security of the US nationals it is now targeting,” he added.

A Spanish police investigator in the case told The Associated Press in Madrid on Saturday that Ahn was identified by the Spanish police at a later stage of its investigation into the Feb. 22 raid and that an international arrest warrant was also issued against him.

That’s in addition to warrants issued for the other suspects named last month in Spanish court documents.

The investigator, who spoke under condition of anonymity given the sensitivities of the case, said that because of judicial secrecy, he couldn’t confirm how many arrest warrants had been issued by Spanish authorities beyond the two initially confirmed.

A Spanish judge said an investigation uncovered evidence that “a criminal organization” shackled and gagged embassy staff before escaping with computers, hard drives and documents.

Cheollima said on its website that it was responding to an urgent situation at the embassy and was invited onto the property, and that “no one was gagged or beaten.”

The group said there were “no other governments involved with or aware of our activity until after the event.”

The Spanish court report said the intruders urged North Korea’s only accredited diplomat in Spain, So Yun Sok, to defect.

In March 2017, the group said it had arranged the escape of Kim Han Sol, the son of Kim Jong Nam, the half-brother of North Korean leader Kim Jong Un, who was assassinated at a Malaysian airport earlier that year.

The Cheollima website said the group shared “certain information of enormous potential value” from the raid with the FBI, under mutually agreed terms of confidentiality.

According to the Spanish court report, Hong flew to the United States on Feb. 23, got in touch with the FBI and offered to share material and videos. The report didn’t say what type of information the items contained or whether the FBI accepted the offer.

The FBI said its standard practice is to neither confirm nor deny the existence of investigations.