Ex-President Barack Obama shows up in Chicago for jury duty 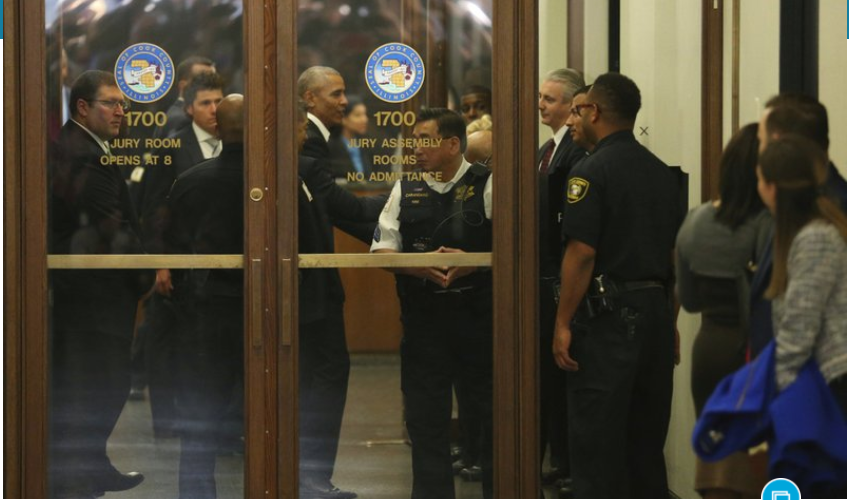 Former President Barack Obama, free of a job that forced him to move to Washington for eight years, showed up to a downtown Chicago courthouse for jury duty on Wednesday morning.

The 44th president’s motorcade — considerably shorter than the one he had when he lived in the White House — left his home in the Kenwood neighborhood on the city’s South Side and arrived at the Richard J. Daley Center shortly after 10 a.m.

Obama — wearing a dark sport coat, dress shirt, but without a tie — waved to people who gathered outside after hearing reports that he would be reporting for jury duty.

Whether he will be selected to sit on a jury, and presumably be selected jury foreman, was not known. But if he is like other would-be jurors, Obama will have to watch a decades-old video in which a much younger Lester Holt, who was a local news anchor before he became a national news anchor, explains the ins-and-outs of jury duty.

Obama is also in line to receive the $17.20 a day that jurors are paid for performing their civic duty.

Obama is the highest-ranking former public official to be called to jury duty in Chicago, and almost certainly the only one who ever arrived with a Secret Service detail. But he is not the first former president to be called to jury duty. In 2015, former President George W. Bush answered the jury duty call in Dallas. He was not selected to sit on a jury. And in 2003, former President Bill Clinton reported for jury duty in federal court in New York City. He also was not selected.