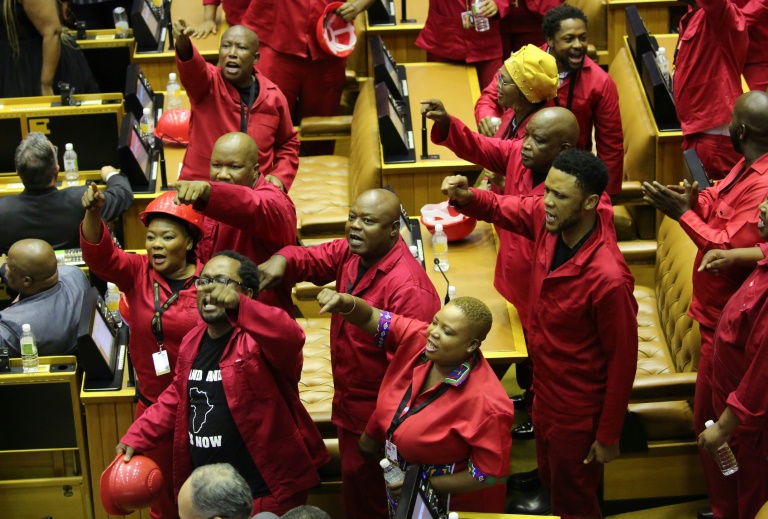 President Cyril Ramaphosa was forced to delay his annual State of the Union address after MPs of the far-left Economic Freedom Fighters staged a rowdy protest, demanding De Klerk be ejected from parliament. (Photo: AFP)

South Africa's last apartheid-era president, F.W. De Klerk, on Monday apologised and withdrew a controversial statement that apartheid was not a crime against humanity, following an outcry.

De Klerk, 83, shared the Nobel Peace Prize with Nelson Mandela in 1993 for dismantling white-minority rule and ushering in democracy.

But he sparked fury among many South Africans when he publicly denied that apartheid was a crime against humanity, despite the UN declaring it such.

"The idea that apartheid was a crime against humanity was and remains an agitprop project initiated by the Soviets and their ANC/SACP allies to stigmatise white South Africans by associating them with genuine crimes against humanity," he said.

The ANC is the African National Congress, which under Mandela fought an underground battle against apartheid before coming to power in South Africa's first democratic elections, in 1994.

The SACP is its erstwhile ally, the South African Communist Party.

The remarks were made on February 2 in an interview with the national broadcaster SABC, and reiterated in a statement by De Klerk's foundation.

Anger reached a crescendo on Thursday when President Cyril Ramaphosa was forced to delay his annual State of the Union address after lawmakers from the far-left Economic Freedom Fighters (EFF) staged a rowdy protest in parliament, demanding De Klerk be ejected from the legislature.

"It is an insult to those who died and (who were) tortured... under the instructions of De Klerk to have De Klerk sitting in a democratic parliament," it said.

Other critics were the SA Council of Churches, other opposition parties and civil society groups, while the ruling ANC slammed De Klerk's remarks as "blatant whitewash".

A foundation set up by the revered anti-apartheid fighter, Archbishop Desmond Tutu, said it was "irresponsible" to debate the "degree of awfulness of apartheid" and called for him to retract his statement.

On Monday De Klerk retracted his statement and apologised for the "confusion, anger and hurt that it has caused".

"I agree with the Desmond and Leah Tutu Foundation that this is not the time to quibble about the degrees of unacceptability of apartheid. It was totally unacceptable," he said in a statement issued by his foundation.

Despite the end of apartheid a generation ago, racial tensions in South Africa remain high and economic inequality and poverty run deep.

An umbrella group called the Anti-Racism Network of South Africa this week launched an annual campaign to tackle racism at the grassroots level.