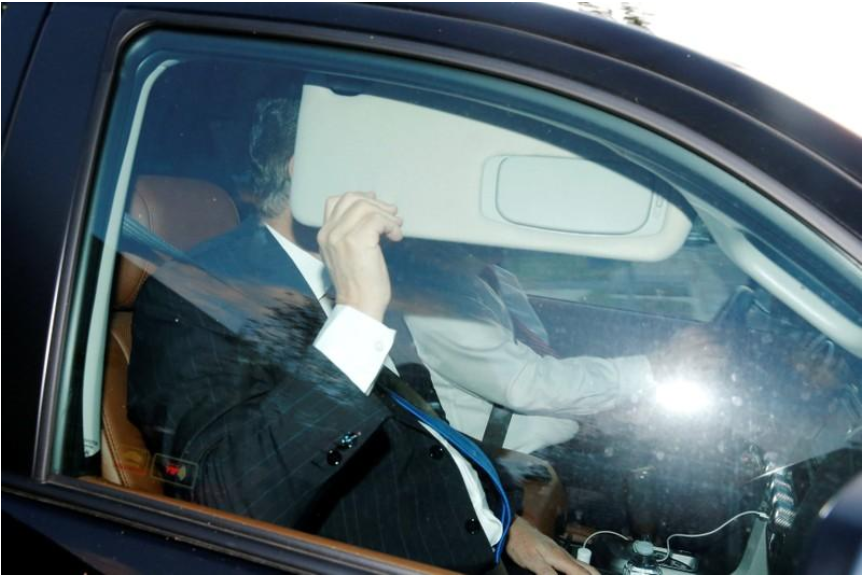 Paul Manafort hides behind his car visor as he leaves his home in Alexandria, Virginia, this morning. Photo: REUTERS/Jonathan Ernst

Paul Manafort, a former campaign manager for President Donald Trump, was indicted on charges of money laundering and conspiracy against the United States, the most serious step yet in a special counsel investigation into Russian links with Trump’s 2016 White House campaign.

Manafort, 68, a longtime Republican operative, arrived at the Federal Bureau of Investigation’s Washington field office on Monday morning to hand himself in after being indicted by a federal grand jury.

Manafort associate Rick Gates was also indicted. He was also due to surrender, the New York Times reported.

The 12-count indictment was the first from the investigation by Justice Department special counsel Robert Mueller into alleged Russian meddling in last year’s campaign to try to tilt the vote in Trump’s favor.

Lawyers for Gates and Manafort did not immediately return calls for comment.

The Russia investigations by Mueller and by several congressional panels have cast a shadow over the Republican’s nine-month-old presidency and have widened the rift between Republicans and Democrats.

Manafort ran the Trump campaign from June to August of 2016 before resigning amid reports he might have received millions in illegal payments from a pro-Russian political party in Ukraine.

It was not immediately clear if the charges, some of which go back at least a decade, related to Manafort’s work as campaign manager. Neither Trump nor his campaign were mentioned in the indictment.

“Sorry, but this is years ago, before Paul Manafort was part of the Trump campaign. But why aren’t Crooked Hillary & the Dems the focus?????,” Trump said in a Twitter post on Monday morning, referring to his Democratic rival last year, Hillary Clinton.

”As it relates to the president, this is nothing,“ a Trump adviser said of the charges, speaking on condition of anonymity. ”It had nothing to do with their tenure at the campaign as far as I can tell,” he said.

The indictment contains counts of conspiracy against the United States, conspiracy to launder money, acting as unregistered agents of Ukraine’s government, false and misleading statements and failure to file reports of foreign bank and financial accounts, the federal special counsel said.

“The rule of law is paramount in America and the investigation must be allowed to proceed unimpeded. The president must not, under any circumstances, interfere with the special counsel’s work in any way,” Schumer said.

Trump, who has denied any allegations of collusion with the Russians, has expressed frustration with the Mueller probe and called it “a witch hunt.” He reiterated his denial of any collusion in a Twitter post on Monday.

The Kremlin has also denied the allegations of campaign meddling.

U.S. intelligence agencies say Russia interfered in the election to try to help Trump defeat Clinton, by hacking and releasing embarrassing emails and disseminating propaganda via social media to discredit her.

Wall Street opened lower on Monday, pulling back from a strong rally last week, as investors assessed the fallout of the indictment.