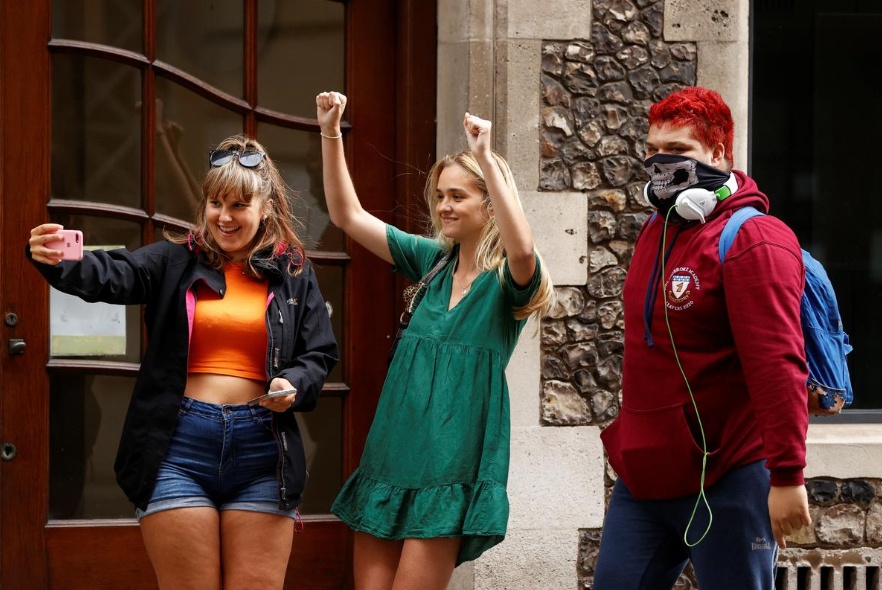 Students react outside the Department for Education as they hear the news of government U-turn on exam grades, amid the spread of the coronavirus disease (COVID-19), in London, Britain Aug 17, 2020. (Photo: Agencies)

Britain's university entrance system is in turmoil after a high-profile government climbdown over the assessment of school-leavers' results.

With end-of-year exams impossible because of the novel coronavirus shutting schools and colleges, teachers estimated what results pupils would have been likely to achieve.

But these marks were then submitted to a computer algorithm that saw significant numbers of students, particularly those from less affluent areas or historically less successful schools, downgraded, affecting their university entrance prospects.

After days of public anger and political criticism, the government dropped the algorithm, revising results to the initial estimates, but in the meantime, some students have now made other plans.

Previously Prime Minister Boris Johnson, who is on holiday, had called the results produced by the system "robust and dependable", and Education Secretary Gavin Williamson said there was no chance of the authorities in England following the lead of Scotland in reversing results, saying "the message we got from everyone was that this is the right system going forward".

That reversal decision in Scotland was widely criticized by central government when it happened, but following similar moves in Wales and Northern Ireland, England has now done the same.

Williamson said he was "incredibly sorry for the distress" caused to students, but when pressed by the BBC, refused to say if he would be stepping down from his position, only saying "my focus is making sure youngsters get the grades that they deserve".

The same system had been lined up for use in the results of GCSEs, exams taken at the age of 16, which are due out on Thursday, but has now been dropped completely.

Opposition Labour Party leader Keir Starmer was highly critical of how the matter had been handled, saying "the government has had months to sort out exams and has now been forced into a screeching u-turn after days of confusion", and the reversal does not bring the saga to a neat conclusion.

Now some universities will find themselves oversubscribed with students who have met the entrance requirements, causing logistical problems, and although a cap on numbers has been removed to allow for this, there will be challenges around physical capacity, especially in the era of social distancing.

"If you rip up the rules after the results are out and with only a few weeks to go before the academic year starts, it is a major challenge," Nick Hillman, director of the Higher Education Policy Institute, told the Guardian.

"Institutions will do their best by their applicants but there are always limits, internally imposed and externally imposed, on how much they can expand and that is doubly true when social distancing rules are in force."