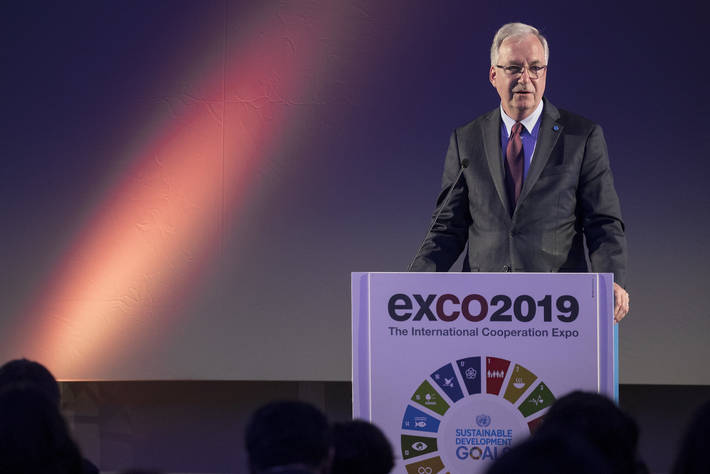 Participants included government officials, international organizations, representatives from the private sector, along with members of society and academia.

Senior ranking officials from the RBAs, the IPRCC, and CIIC presented joint initiatives, positives measures, and the lessons learned so far in the fight against poverty.

The partnerships, focused on the South-South and Triangular Cooperation, were highlighted as vital components in promoting the 2030 Agenda for Sustainable Development.

WFP Deputy Executive Director, Amir Abdulla, speaking on behalf of the RBAs, highlighted their role with the SDGs in strategic locations worldwide, emphasizing how the use of technology improves the lives of rural communities.

“In the past six years, China has made decisive victories in the battle against poverty,” said Xia Gengsheng, vice minister of the State Council Leading Group Office of Poverty Reduction and Development.

Xia emphasized how the final stretch on poverty reduction efforts is the hardest.

“We need to continue to push forward with all efforts, fight against poverty with perseverance, consolidate current achievements, and reduce poverty for more people. We will never give up during the battle,” he said.

“We will leverage more social resources so that more enterprises, institutions, and the public can join the fight against poverty,” Ni added.

He Zhiwei, county mayor of Horqin Zuoyi Rear Banner, in China’s Inner Mongolia, stressed that scientific and targeted measures should be adopted to reduce poverty in areas with frail ecological environments.

“It is important to improve the living environment and production conditions, foster leading ecological industries, and increase incomes to alleviate poverty in a sustainable way,” He said.

Yao Li, founder and chairperson of BN Vocational School said charitable vocational education can provide high-quality resources for the poor and vulnerable, thereby improving their ability to find a job and earn money.

“With unremitting efforts, the PRC has made remarkable achievements in the past 40 years. China’s success in reducing poverty has generated knowledge to share with the developing world.” said European ADB representative Melanie Ullrich.

The results from the Global Solicitation and Challenge Prize on Best Poverty Reduction Practices was presented, with the list of the first compilation of 24 poverty reduction case studies released, out of 110 best case studies on the shortlist, announced by Xue Lisheng, vice editor-in-chief of CIIC.

During closing remarks, Tang Shengyao, director of the Office of South-South and Triangular Cooperation highlighted the importance of the seminar in sharing experiences on the use of technological innovation for rural development.