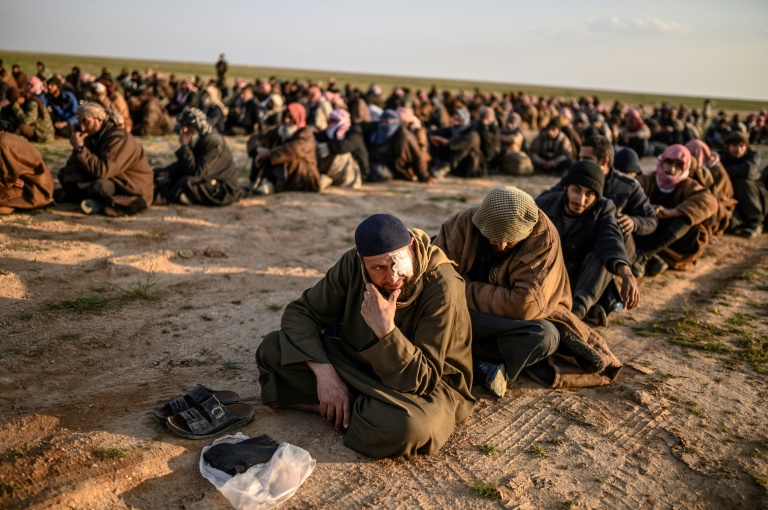 US-backed Syrian forces warned Sunday they were struggling to cope with an outpouring of foreigners from the Islamic State group's imploding "caliphate", urging governments to take responsibility for their citizens.

The Kurdish-led Syrian Democratic Forces have evacuated nearly 5,000 men, women and children from the jihadist redoubt since Wednesday, moving closer to retaking the last sliver of territory under IS control.

"The numbers of foreign fighters and their relatives that we are holding is increasing drastically," Kurdish foreign affairs official Abdel Karim Omar told AFP.

"Our current infrastructure can't handle the mass influx", he said.

Syria's Kurds have repeatedly called on foreign countries to repatriate their citizens, but most have been reluctant to allow battle-hardened jihadists and their relatives back home due to security concerns.

At the height of its rule, IS imposed its brutal interpretation of Islamic law across territory straddling Syria and Iraq that was roughly the size of the United Kingdom.

But more than four years after IS declared a cross-border "caliphate", the jihadists have lost all but a tiny patch of land in the village of Baghouz near the Iraqi border.

After years of fighting IS, Syria's Kurds say they hold hundreds of suspected IS fighters and their relatives.

"As thousands of foreigners flee Daesh's crumbling caliphate, the burden which is already too heavy for us to handle is getting even heavier," SDF spokesman Mustefa Bali said on Twitter late Saturday, using an Arabic acronym for IS.

"This will remain as the biggest challenge awaiting us unless governments take action and fulfil their responsibilities for their citizens," he said.

No evacuations were reported from the enclave on Saturday, but the two batches of people that left on Wednesday and Friday included Europeans, Iraqis and nationals of former Soviet countries, according to the SDF.

Around 46,000 people, including a large number of foreigners, have streamed out of IS's shrinking territory since early December, according to the Syrian Observatory for Human Rights, a Britain-based war monitor.

While civilians are trucked north to Kurdish-run camps for the displaced, suspected jihadists are sent to SDF-controlled prisons.

Omar said SDF "detention centres can't accommodate all the fighters" coming out of the last IS pocket.

The evacuation of men, women and children has put a strain on Kurdish-run camps for the displaced, especially the Al Hol camp, which now shelters more than 40,000 people.

"There is a lot of pressure on us, especially in Al Hol, where in addition to the relatives of IS fighters you have a large displaced population," Omar said.

"Thousands more are expected in coming hours/days at Al-Hol camp, putting a further strain on basic services," it tweeted Friday.

The International Rescue Committee on Friday said 69 people, mostly children, had died on the way to Al-Hol, or shortly after arriving in past weeks.

The SDF say they are trying to evacuate remaining civilians through a corridor before pressing on with a battle to crush the jihadists unless holdout fighters surrender.

Some 2,000 people are believed to remain inside Baghouz, including foreigners, according to the US-backed force.

Many European countries are now confronted with the dilemma of whether to bring back their citizens who travelled to join the group and prosecute them at home, or bar them from entry over security concerns.

On Friday, the family of Shamima Begum, 19, said it would challenge the British government's decision to revoke her citizenship.

Begum, who travelled to Syria in 2015 aged just 15, faced being left stateless after Britain revoked her citizenship, and Bangladesh, where her parents are from, said it did not want her.

On Thursday, the father of Hoda Muthana, 24, sued to bring her home after President Donald Trump's administration declared she was not a US citizen.

The battle for Baghouz is now the only live front in Syria's war, which has killed more than 360,000 people and displaced millions since 2011.

Further north, more than 20 civilians were killed Sunday in central Syria when a landmine left behind by IS exploded under a van, the state news agency SANA said.

The ordnance left behind in the town of Salamiyeh killed farmworkers who were heading to pick truffles in Hama's countryside, SANA said