WORLD Expectations for Korea's future from the Demilitarized Zone

Expectations for Korea's future from the Demilitarized Zone

Top diplomats from the US, the Republic of Korea (ROK) and Japan in Seoul pledged on Thursday to jointly ensure Pyongyang gives up its nuclear weapons following US President Donald Trump's summit with DPRK leader Kim Jong-un. 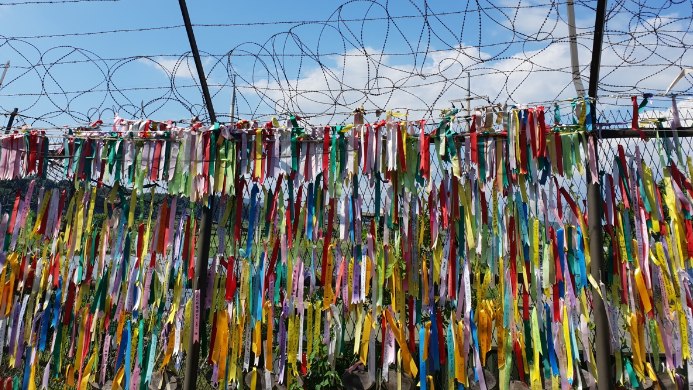 On Thursday, military officials from both sides of the Demilitarized Zone (DMZ) also met for the first time in 10 years to discuss easing tensions and strengthening formal ties.

So are people in the ROK reassured - particularly those living near the barbed wire of the DMZ?

“We do not expect too much to change after one or two meetings. But as the year goes by, it is our only hope that the inter-Korean exchange will continue and the days when guns and knives were aimed at each other will pass,” Shin Gina said while standing in front of a barbed wire fence that restricts civilians from reaching the DMZ, which is just a few kilometers away.

The wire is covered with hundreds of ribbons bearing messages of the desire for re-unification.

In the distance, beyond the wire and the check posts, the mountains of the DPRK can clearly be seen.

“There is a good direction. There are expectations of a good direction, but there have been many lies in the past. Well, we older people with conservative personalities, we have hope but not great expectations,” according to Lee Joon-koo, a Seoul resident who said he was inspired to visit the DMZ by the summit between Kim Jong-un and US President Donald Trump.

There is cautious optimism, enough to spark a land-buying frenzy in the area that has become so over-heated that the government has threatened to intervene.

And that is not the only change being felt in Paju and other districts that abut the DMZ.

The potential for a military de-escalation, as well as the spotlight all the recent, and ongoing, diplomacy has shone on the world’s most fortified frontier, has led to an influx of something that is more welcome – tourists.

Particularly tourists from the ROK, according to Jung Sung-chun, who runs a small souvenir shop just beyond the wire, only a few meters from a ROK military watchtower. 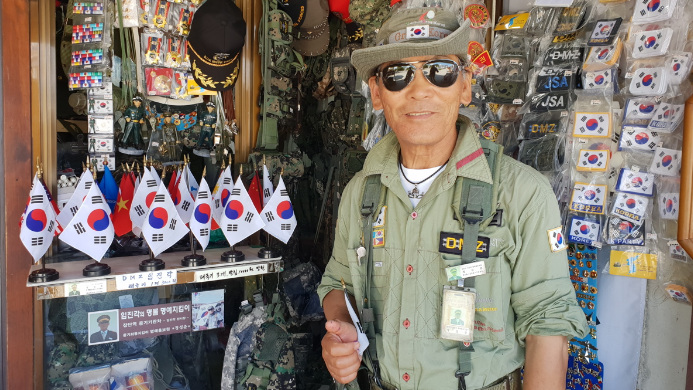 Mr. Jung was born in what is now the DMZ. (Photos: CGTN)

He says his confidence will rise only when he sees real change, and that means more than mere talk of denuclearization and symbolic inter-Korean exchanges.

“It is not unification if you just eliminate the barbed wire. If we can go back and forth, that is unification, then it will become a natural re-unification later on,” said Mr Jung, a Vietnam War veteran who still wears his jungle fatigues every day.

The deal reached in Singapore has received a lot of criticism for being too vague.

But if all does go well, it just might be possible that in a few years, the only troops here would be tourists coming to see what will hopefully by then be just a relic of the past.

Top image: Messages of re-unification on the barbed wire.