By the time Chinese President Xi Jinping’s plane landed at the airport in Port Moresby on November 15, Arikesh, a member of the greeting team, was very excited. The entire team was wearing feathers and waist skirts, with drums in hands. He started to perform the welcome dance for the Chinese guests. 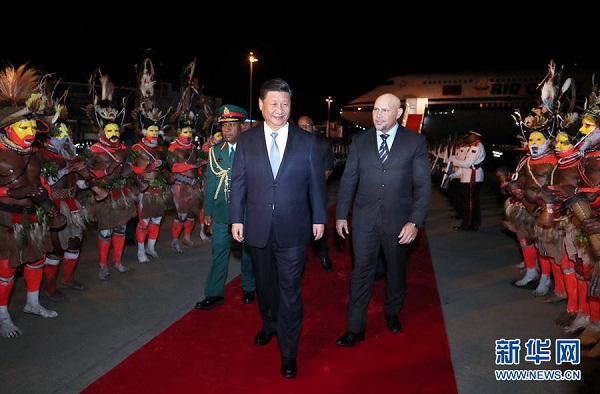 Born in Hela Province, Papua New Guinea (PNG), Arikesh and his peers began preparing for the greeting ceremony seven to eight hours prior to the arrival.

“The makeup and my costume you are seeing now takes over two hours to complete. This is the etiquette of our tribes to welcome the most distinguished guests. I am very honored to witness President Xi Jinping's visit to PNG. To be present at the welcoming ceremony for President Xi is my greatest honor!” Arikesh told the People’s Daily. 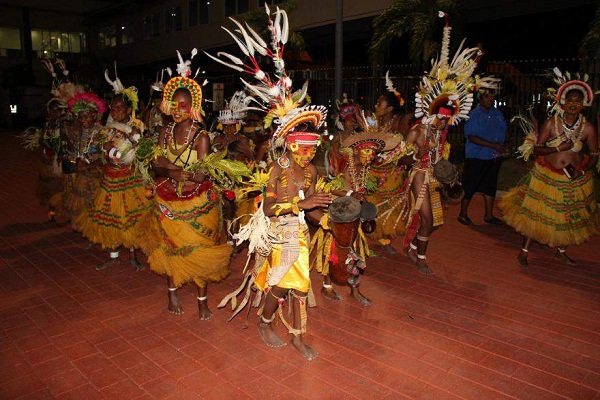 Before the welcoming ceremony for President Xi, Ruby had been practicing over and over with his leather drum. "I've got to show the enthusiasm of PNG in the best way," he said. 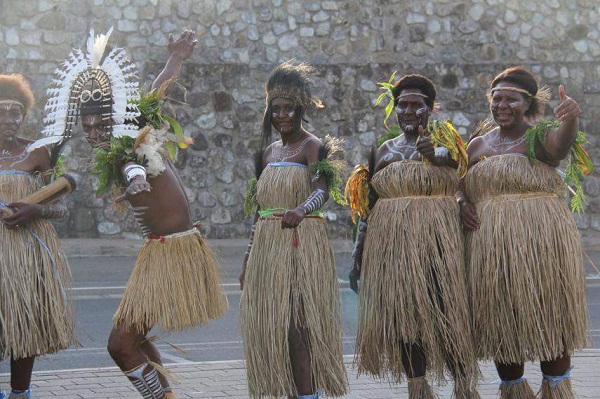 Local people, waiting outside the airport to greet Chinese President Xi, give reporters a thumb up.

Among the welcoming crowds, a group of students dressed in gorgeous national costumes were notable, with the youngest children only 7 or 8 years old. Christina, their teacher, led the children in singing songs while dancing. "Welcome, my Chinese friends! Thank you China for bringing us good! ...” The children's voices are clear and rhythmic, making them one of the best footnotes to China's friendship with PNG. 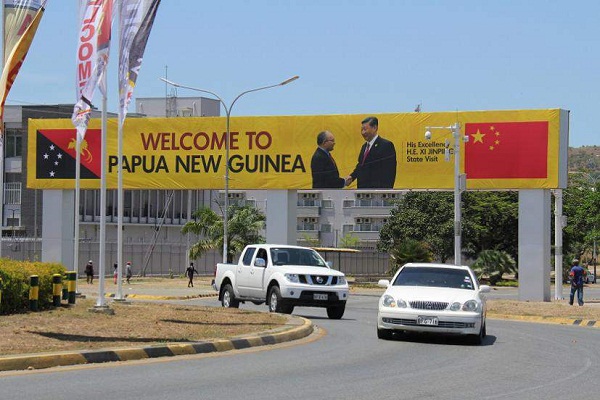 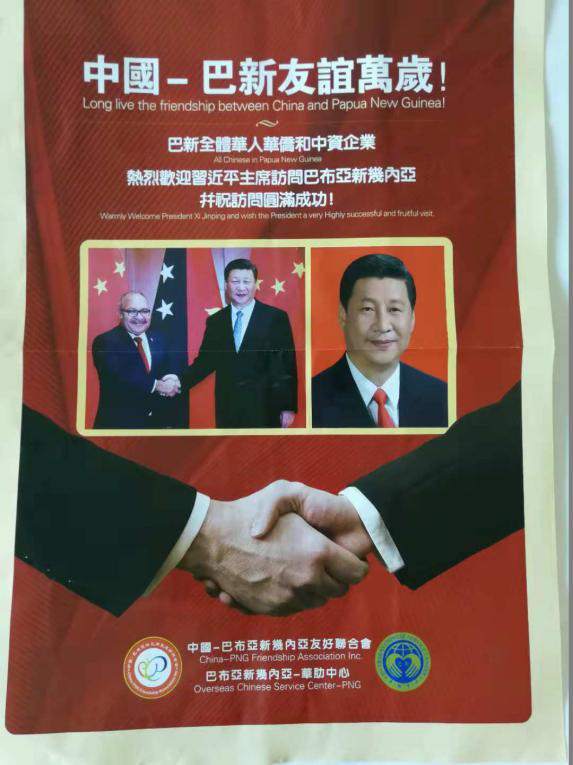 This reporter, a correspondent from the People’s Daily, planned to do some interviews at the Papua New Guinea (PNG) National Museum on Thursday, November 15, until he arrived at the closed door of the museum.

“It’s a holiday today, the museum will not open,” a staff member said, while pointing to the nearby Independence Boulevard. 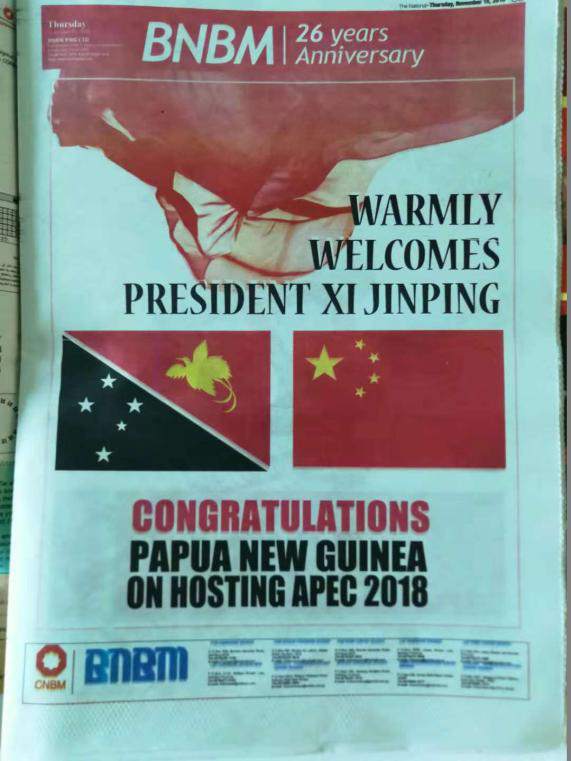 National flags of China and PNG, as well as traditional Chinese knots, were hung up on both sides of Independence Boulevard, which links the national parliament house and the PNG capital's trunk roads. The flags and knots enrich the atmosphere of ebullience and festivity. More than ten thousand PNG locals gathered at the newly built Independence Boulevard to witness this great and happy event in PNG’s history.

O’Neill thanked China for its long-term assistance to his country. “Today is another key moment in PNG-China relations, as the inauguration of the boulevard will be a milestone in bilateral ties,” O'Neill said.

Shortly after the hand-over ceremony, this reporter drove down the Independence Boulevard. With six lanes in both directions, the boulevard is the road of the highest standard in PNG. Off the boulevard, many excited local people were reluctant to leave. Some of them greeted and gave a thumb up to this reporter. Two local girls in T-shirts bearing China and PNG flags turned around to show the author the words “Welcome to PNG, President Xi” on their backs. 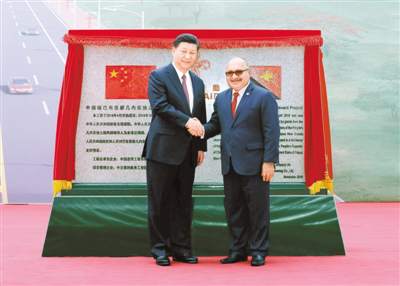 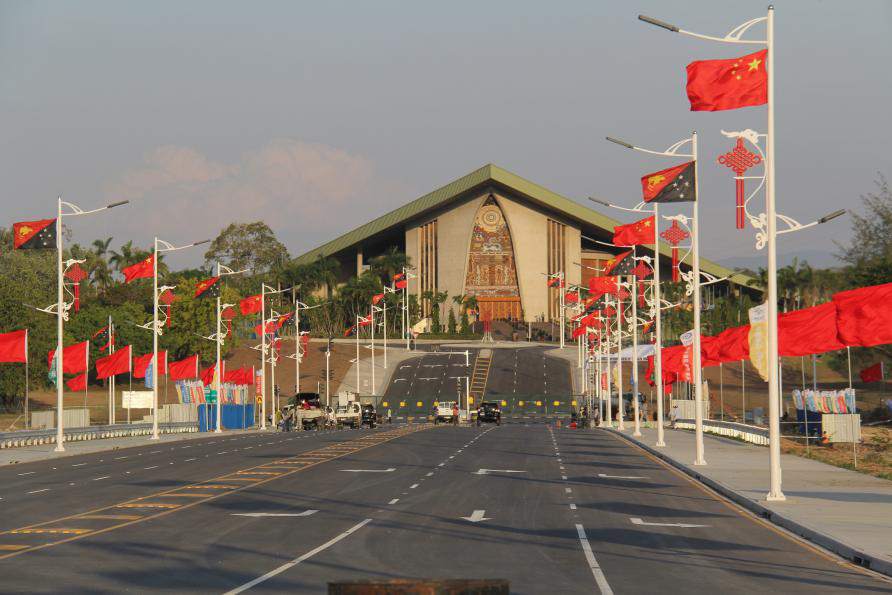 The flags of two countries and traditional Chinese knots decorate on both sides of Independence Boulevard，creating a festive atmosphere. (Photos: Wang Yunsong/People’s Daily) 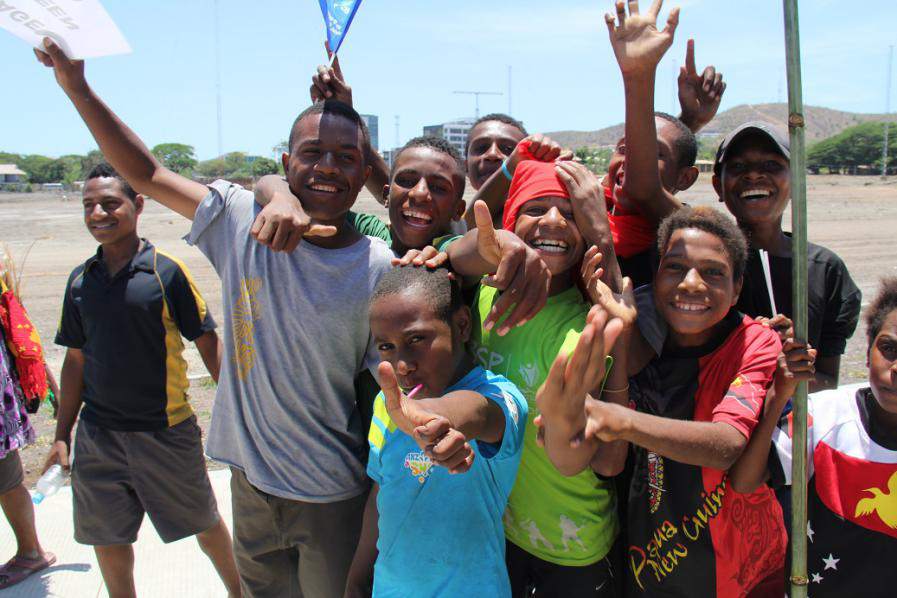 “Thank you, my Chinese friends!” 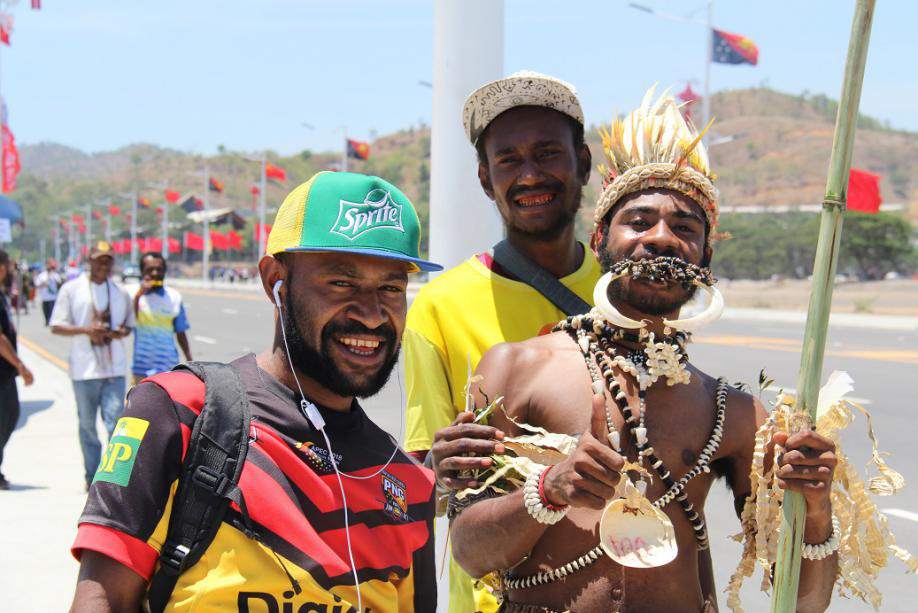 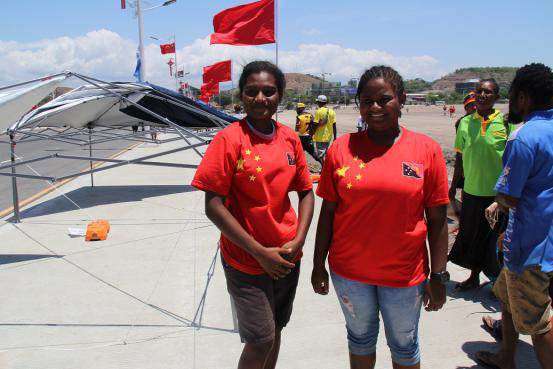 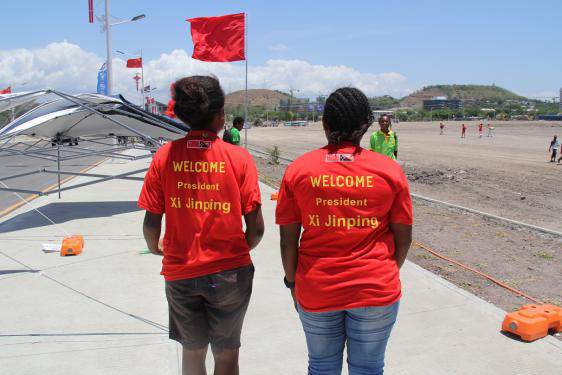 “This is the moment I waited for!”

Chinese and English banners saying “Thank President Xi for the assistance in building the school and the road” were hung on the street outside the Butuka Academy, a Papua New Guinea and China friendship school. The students, dressed in red T-shirts, held the flags of two countries and shouted “Welcome!” in Chinese and English. They looked like a red ocean.

When President Xi Jinping and Prime Minister O’Neill went to the hall in the teaching building, the teachers and students looking forward to seeing them burst into cheers immediately.

The kids have rehearsed for this special performance for more than two months. “This is the moment I prepared for,” Erb Dina, a 12-year-old, said happily.

“The boat is floating in the water...” When President Xi left the school, he went to the choir students and listened to their singing. “I sang the song when I was a kid, thank you,” Xi said.

Waving goodbye to Xi, the teachers and students at the Butuka Academy stood until they could not see the motorcade any more. It was hard for them to say goodbye. 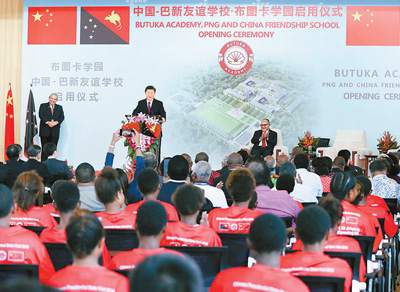 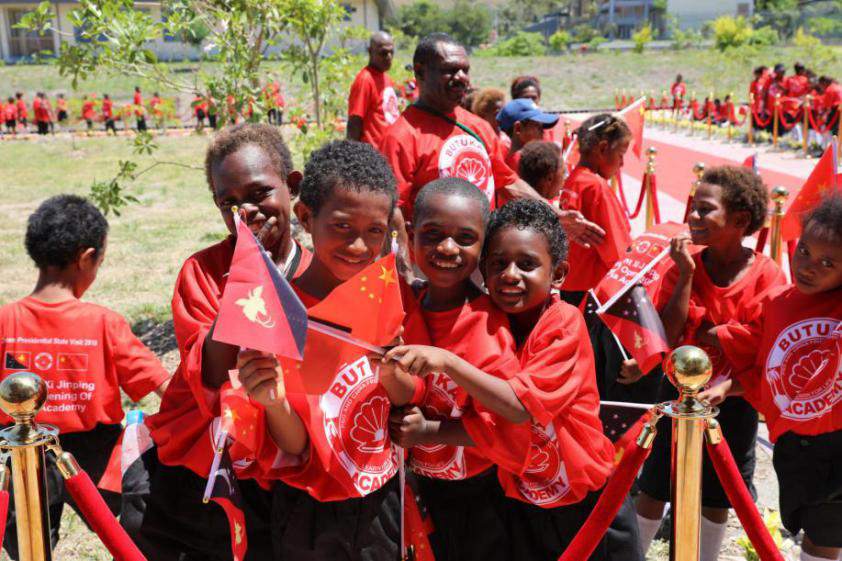 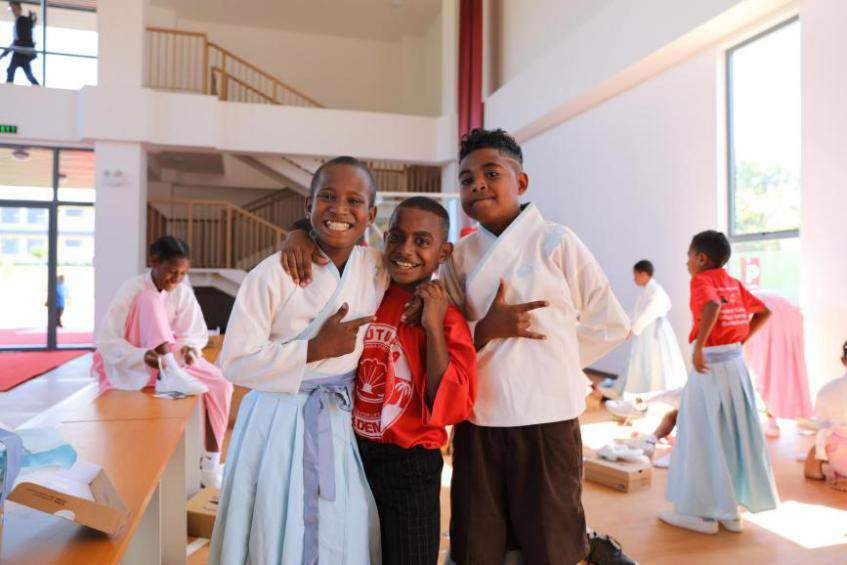 Children smile at the Butuka Academy.

“A strong and visionary leader”

Banners and flags saying “Welcome to Papua New Guinea” and “APEC 2018” are hanging around this beautiful Pacific port city. APEC meeting shuttles marked with the phrase "China-assisted" are driving on the streets in Port Moresby. APEC is the top news on all local media. The joy that comes from hosting the APEC meeting impresses everyone in the country of the bird of paradise.

Papua New Guinea hosted the APEC CEO Summit by putting the local character of the island front and center. The guests gathered and worked together for development and cooperation on board the cruise ship Pacific Explorer in Port Moresby.

Xi delivered a keynote speech. He laid out the challenges the global economy faces and provided advice, through expounding and vivid metaphors. The audience applauded and picked up their mobile phones to record this unforgettable moment.

“President Xi Jinping deals with the major issues in historical perspectives. He is a strong and visionary leader,” Don Campbell, co-chair of the Pacific Economic Cooperation Council, said.

“He impressed me not only with his wisdom, but also his personality and charm,” said Michel Pyle, Energy Star President in PNG, who listened to Xi speak for the first time. 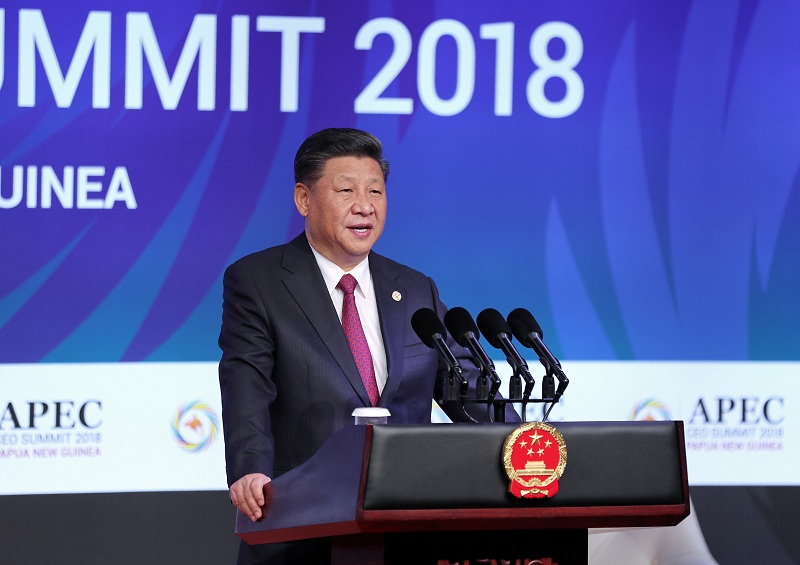 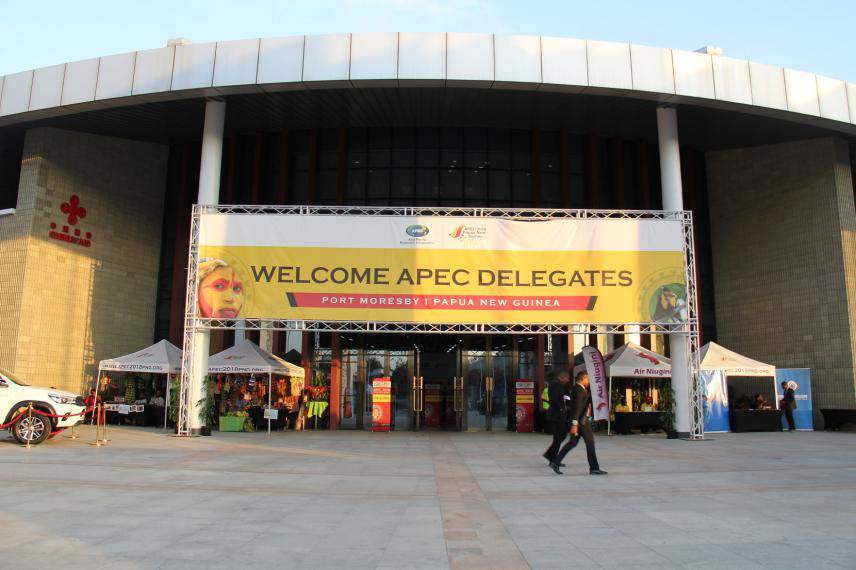 Two delegates walked through the international convention center, built with Chinese assistance, one of the venues hosting the APEC.