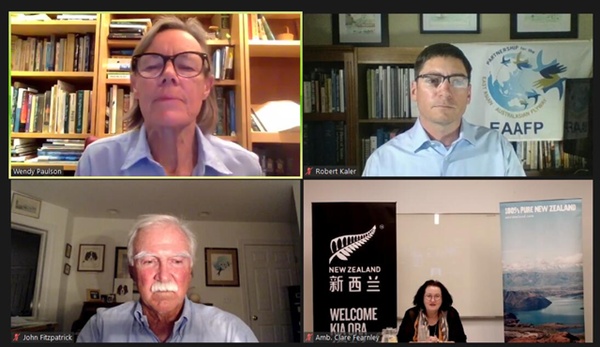 A group of experts, scholars, and government representatives shed light on the significance of biodiversity conservation with global collaboration via Zoom on May 21, 2021. (Screenshot provided to China.org.cn)

"Saving a Flyway," a short film showing how the collaboration among academics, NGOs, local communities, and governments have turned an "epicenter of extinction" into a story of hope for millions of migratory shorebirds, was premiered online on May 21.

Organized by the Paulson Foundation, a group of experts, scholars, and government representatives watched the film's premiere and shed light on the significance of the example in the video. They also discussed how it can inspire others around the world to forge a new international framework to slow and halt biodiversity loss, just as countries prepare to attend the UN Conference on Biological Diversity in Kunming, China, in October.

The 14-minute video "Saving a Flyway" celebrates the extraordinary migration of millions of shorebirds along the East Asian-Australasian Flyway and documents the changes in ecological policies over the last few years relating to the heart of the flyway – China's Yellow Sea.

"China's coastal wetlands are very valuable from an ecological and economic standpoint. And, importantly, they are essential to the survival of migratory shorebirds," Henry M. Paulson, Jr., a conservationist and chairman of the Paulson Institute, narrates at the beginning of the video.

"Because so many birds migrate long distances, they remind us how important it is that if our conservation and environmental protection efforts are to succeed, they have to be not just local, but international," he adds.

The Yellow Sea region used to be under threat of becoming "an epicenter of extinction" for many shorebird species, Wendy Paulson, vice chairman of the Paulson Institute and chairman of the Bobolink Foundation, introduced at the virtual premiere ceremony. However, thanks to the collaboration of numerous organizations and people working across interdisciplinary and international borders, the situation has changed for the better.

"In 2018, the Chinese government announced a ban on further commercial-related reclamation of coastal wetlands and moved to protect the remaining important intertidal mudflats by attaining World Heritage Site classification, and other means. Today, two of the most important sites at Yancheng in Jiangsu province have full-fledged World Heritage status and 12 more sites along the coast are due to be nominated in the next few years," Wendy Paulson said.

"There is still a long way to go to secure the future of these shorebirds. But now there is hope," Paulson added.

Cui Shuhong, director-general of nature and eco-conservation at the Ministry of Ecology and Environment, said in a video message that China's coastal wetlands play an important role in protecting migratory birds along the East Asian-Australasian Flyway.

"In recent years, with great efforts of the relevant departments of the government, China has achieved some important achievements for the protection of coastal wetlands," he said.

Clare Fearnley, ambassador of New Zealand to China, stressed that the New Zealand government attaches great importance to the protection of the natural world and stands ready to deepen its cooperation with governments of all countries to better protect migratory birds along the East Asian-Australasia Flyway.

Robert Kaler, chairman of the East Asian-Australasian Flyway Partnership (EAAFP), expressed his pleasure in seeing more partners joining the initiative to protect migratory birds. He stressed that the Chinese government, the New Zealand government, the Paulson Foundation, and other stakeholders all play a crucial part in achieving the goal of protecting migratory birds and their habitats.

China has fulfilled its commitment to the protection of migratory birds, John Fitzpatrick, director of the Cornell Lab of Ornithology, said, noting that it has set an example for the rest of the world regarding the importance of international collaboration.

The video "Saving a Flyway" is now available for streaming via the EAAFP and Cornell Lab of Ornithology websites, as well as on the Paulson Institute's website and YouTube channel.