"Cliché" and "crazy" were words experts used to describe US Secretary of State Mike Pompeo's latest speech in which he bluntly called on the Chinese people and "free world" countries to "change" the Communist Party of China (CPC). The US is leaning further to a new Cold War with China and escalating McCarthyism to a higher level, experts said, noting that China should remain alert to the possibility of military clashes with the US in the near future. 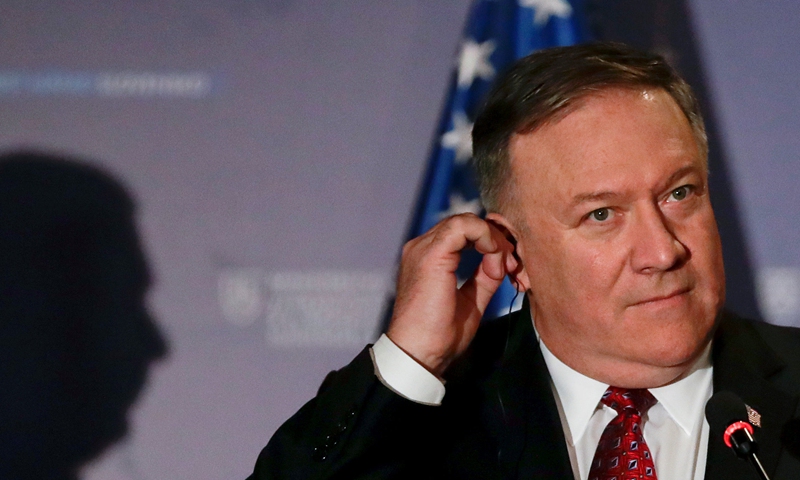 During his near half-hour speech at the Richard Nixon Presidential Library on Thursday, Pompeo attempted to paint China and the CPC as a threat to the "free world," referring to the US' persistent efforts to make changes to China's behavior. He also mentioned that previous engagements with China have failed, and accused China of taking advantage of engagements with the US in order to cheat its way to power and prosperity.

Pompeo's speech, delivered in the run up to the 50th anniversary of former US President Richard Nixon's milestone visit to China in 1972, aimed to establish the Trump administration's latest China policy, said Li Haidong, a professor at the Institute of International Relations under the China Foreign Affairs University.

But it was full of clichés and purposely overlooked the facts, Li noted, adding that the real reason the US has changed its China policy is that the two countries' comparative strengths have changed and the US is unable to tolerate China's rise.

Foreign policy is generally announced when a new government begins its term. As there are now three months before the US' November election, Pompeo's speech was clearly intended to support Trump's reelection bid, said Li.

Gao Zhikai, chair professor of Soochow University and vice president of the Center for China and Globalization, who accompanied Nixon during his visit to China in 1985, told the Global Times that by slandering previous bilateral engagement, Pompeo insulted the Chinese people and Americans dedicated to building a bridge between the two nations.

Pompeo also shows no respect to the achievements of bilateral ties and overlooks that better China-US ties benefit the two sides, Gao said, adding that the only appropriate thing Pompeo could have done at the Nixon Library was kneel and apologize.

Pompeo's words were a total denial of the US' four decades of engagement with China and revealed that hawks in the US are leaning further toward a new Cold War with China, Sun Chenghao, an assistant research professor at the Institute of American Studies under the China Institutes of Contemporary International Relations, told the Global Times.

By escalating the Cold War mentality to such a high level, Republican hawks are attempting to set the tone for the next US administration: No matter who wins the November election, they must walk this established path and continue this aggressive China policy, Sun said.

Analysts said that US Vice President Mike Pence's speech in October 2018 preluded a Cold War against China, and Pompeo's Thursday speech sharpened the Trump administration's already harsh criticism of China ahead of the November election.

"Separating the Party and the Chinese people" is ideological language that attempts to explain the "rationality" of the Trump administration's big changes in its China policy and persuade US elites and the public, Li said.

Sun said that the US has refused to recognize the close bond between the Chinese people and the CPC. Pompeo's speech also revealed US hypocrisy as it said they stand with the Chinese people, yet the US has imposed restrictions on overseas Chinese students, removed Chinese journalists from the country and closed the Chinese consulate in Houston.

Gao said what Pompeo is doing is instigating color revolution in China and he is doomed to fail. US politicians are making the Chinese people more united and helping us further understand that the only way to thrive and be prosperous is to stand with the CPC.

Calling for a confrontation between China and the "free world" led by the US was another point in Pompeo's speech. "The old paradigm of blind engagement with China simply won't get it done. We must not continue it. We must not return to it," he said.

Pompeo's speech was seemingly a declaration of a Cold War against China, and it appeared that the politician was doing his utmost to shift the blame for the US' domestic crisis, Lü Xiang, a research fellow at the Chinese Academy of Social Sciences in Beijing, told the Global Times on Friday.

US politicians under pressure to deal with the pandemic are attempting to make an enemy of China, using ideological rhetoric to draw anti-CPC allies. But China has long cast away ideological influence and does not make diplomatic decisions based on ideology, Lü noted.

The US is imposing its "freedom and democracy" globally, yet it is actively creating more wars and disasters in many areas. But it refuses to reflect on or cease its actions, said Sun.

It is unrealistic and naïve for US politicians like Pompeo to think they can create international allies for a new Cold War against China. It would be impossible to put an iron curtain around China as there are no longer any real ideological or militaristic conflicts between the two, he said.

Unlike during the Cold War, economic exchanges between two groups cannot be entirely severed as globalization has united the world, and most countries do not want to side with only China or the US, Sun noted.

Leaders from the EU and many countries around the world recently expressed their hopes that strained China-US ties could be repaired. Singaporean Prime Minister Lee Hsien Loong, for example, said in June that China and the US must find a way to work together to avoid a further escalation of tensions.

There is a high possibility that the US will further escalate its conflict with China before the election, Li said, noting that Pompeo's call for the "free world" to unite against China implies that once the US launches military action against China, many countries will stand with it.

The risk of a military clash exists, and we should be alert to it, Li said.