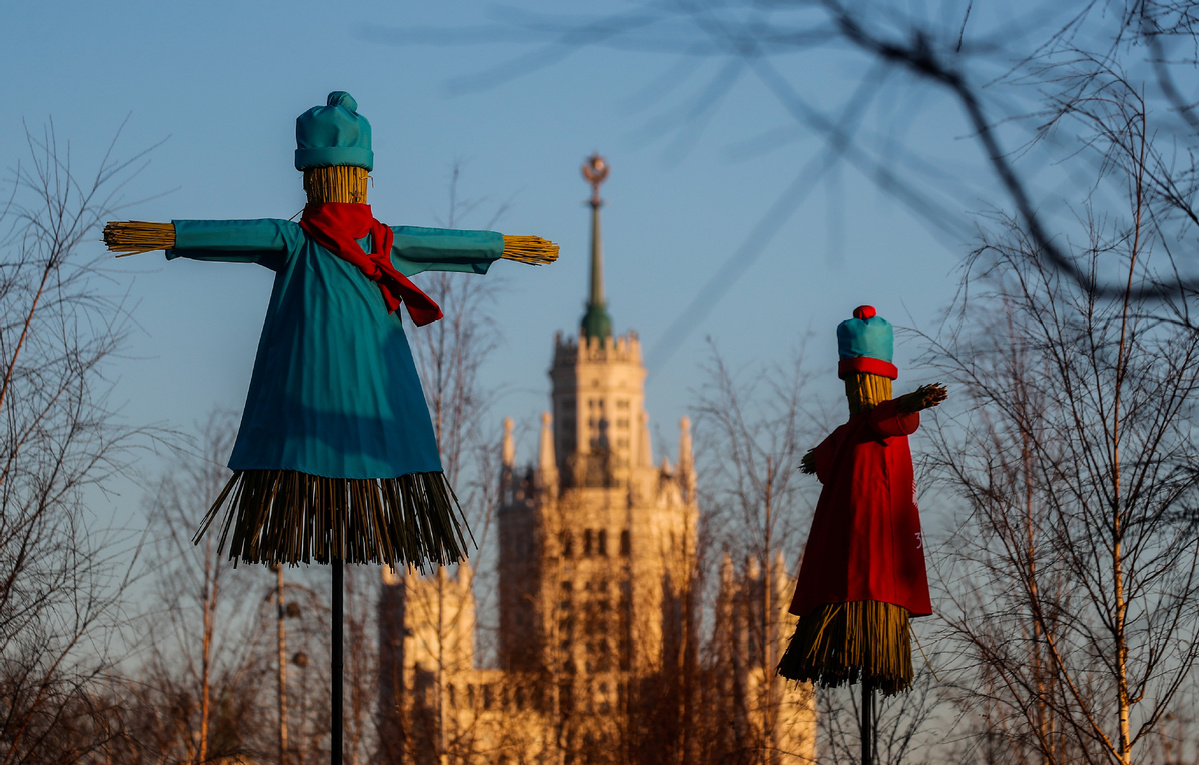 Effigies of Lady Maslenitsa are seen with a Stalin's era skyscraper in the background during celebrations of Maslenitsa, also known as Pancake Week, a pagan holiday marking the end of winter, in central Moscow, Russia, Feb 25, 2020. (Photo: Agencies)

The spread of the novel coronavirus pneumonia worldwide has cast a shadow over Russia's economy due to instability in oil prices and the exchange rate, Russian experts said.

"In general, the spread of the epidemic outside of China speaks of a more negative scenario for the ruble," said Natalia Orlova, chief economist at Alfa Bank, one of the largest private banks in Russia, adding that whether the effect will be negative enough to financially affect inflation is not yet obvious.

The virus has now been identified in seven European countries including Italy, Germany, Switzerland, Austria, and Croatia. The outbreak of the coronavirus in Europe will not affect trade between Russia and the European Union, as the main export items between them are raw materials, Orlova said.

And it will have little effect on the volume of imports from the EU into Russia, she added.

In an interview with Russian state news agency Tass, Orlova pointed out that the coronavirus' impact on the Russian economy was possible through only two channels－oil prices and the exchange rate.

Alexander Kalinin, the president of the All-Russian Non-Governmental Organization of Small and Medium Business, echoed Orlova when he said that the value of oil and metals exported by Russia had already fallen.

"In the energy sector, our losses can be around $1 billion this year, if the prices do not recover. And if they fall some more, then there will be additional losses," Kalinin said.

"From the point of view of the Russian economy, this means lower oil prices－$50-60 per barrel against $60-70, as well as lower revenues from exports of services," said Valery Vaysberg, director of the analytics department at the Region Group of Companies.

Vaysberg said a decrease in energy exports both in nominal and physical terms could be expected, both to Europe and to the countries of Southeast Asia, due to the coronavirus outbreak in the region.

He said this will lead to a decline in the positive trade balance and, accordingly, to a lower ruble exchange rate.

According to the experts, if the coronavirus epidemic does not end before the end of 2020, the Russian economy could be down by 0.3 percentage point.

Associate Professor at the HSE's Department of World Economy and World Politics Petr Mozias said that the impact on the Russian economy would be complex, as Russian-Chinese trade turnover is significant.

Mozias said that the negative impact would be seen primarily on Russian companies engaged in logistics and sales of Chinese goods.

Kalinin added that the Chinese government had provided help to those industries and entrepreneurs that were affected, such as hotel businesses, airlines, car dealers, restaurants and retail property owners.

Meanwhile, Russia is optimistic about Chinese markets as the economic situation in China has begun to improve as the outbreak alert levels have been lowered in seven provinces, Kalinin said.