Experts warn of catastrophic post-holiday COVID-19 surge in US 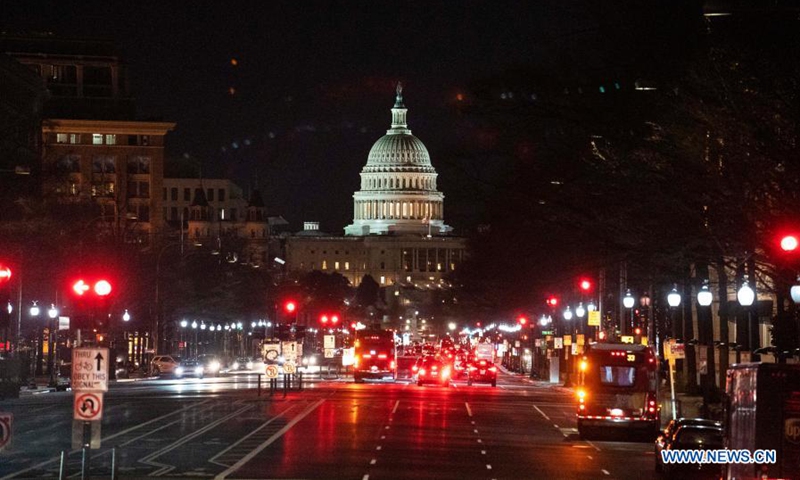 Photo taken on Dec. 30, 2020 shows the US Capitol building in the evening in Washington, D.C., the United States. (Photo: Xinhua)

As lots of Americans are heading home or traveling for holidays, public health experts are warning of another possible catastrophic COVID-19 surge that could hit the United States hard.

Holidays have proven to be a catalyst of COVID-19 infections across the country. The United States have witnessed significant upticks in infections during or after holidays earlier this year, with the largest surge in infections, deaths and hospitalizations appearing after Thanksgiving.

"The virus transmission that took place during the Thanksgiving period has brought many health systems across this country to the brink of failure and we are still not yet finished seeing that impact," said John Brownstein, chief innovation officer at Boston Children's Hospital.

U.S. top infectious disease expert Anthony Fauci warned that an already-rising tide of coronavirus infections may get another boost as Americans flock together for Christmas and New Year celebrations despite warnings from public health officials.

"We very well might see a post-seasonal -- in the sense of Christmas, New Year's -- surge, and as I've described it, as a surge upon a surge," Fauci told CNN.

Fauci, director of the U.S. National Institute of Allergy and Infectious Diseases, said Tuesday the United States is in a coronavirus surge that has just gotten "out of control in many respects."

He said the recent holiday travel period could make January even worse than December.

The country has witnessed more COVID-19 deaths in December than in any other month since the outbreak of the pandemic, according to The COVID Tracking Project.

"December is already the deadliest month since the beginning of the pandemic in the United States," said the tracking project, which reported record-high COVID-19 hospitalized cases of 124,686 across the country on Tuesday.

A total of 199,282 new cases and 3,390 deaths were reported across the nation on Tuesday, according to data updated on Wednesday by the U.S. Centers for Disease Control and Prevention (CDC).

The CDC had urged the public to avoid travel and stay at home during the Christmas holiday, to curb the further spread of the virus.

Healths experts and U.S. media also have been criticizing the efficiency of COVID-19 vaccine rollout in the country. The country lags behind some other countries in vaccines, and the vaccine rollout is behind schedule with only one day left in 2020, according to CNN reports.

The United States has recorded over 19.67 million COVID-19 cases with over 341,000 related deaths as of Wednesday afternoon, according to the real-time count kept by Johns Hopkins University.