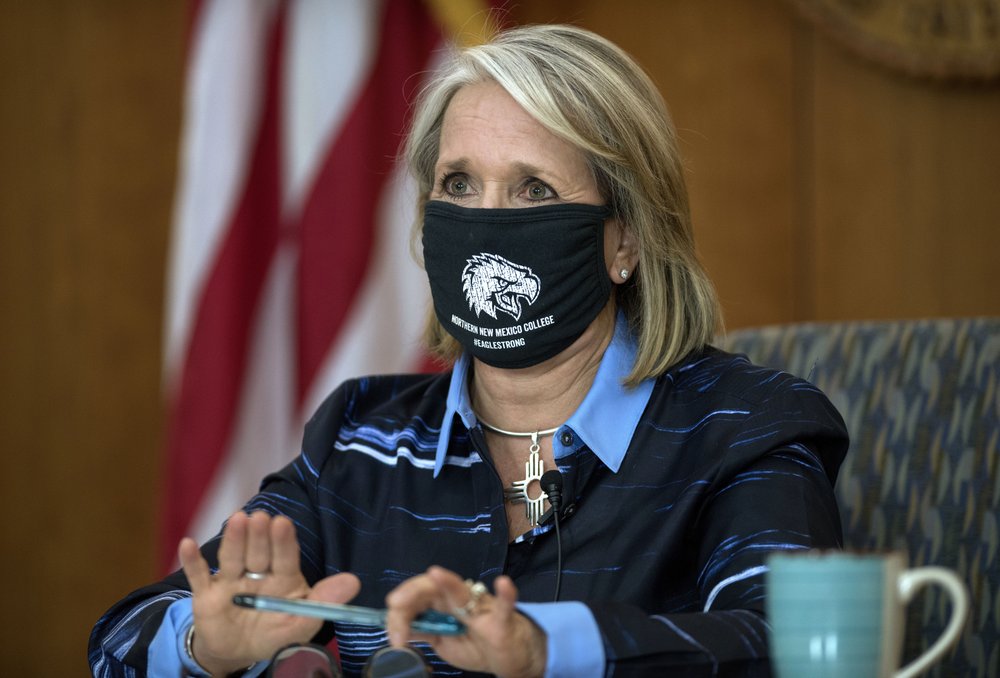 IN this Thursday, July 23, 2020 file photo, Gov. Michelle Lujan Grisham gives her weekly update on COVID-19 and the state's effort to contain it during a virtual news conference from the state Capitol in Santa Fe, N.M. Grisham was an early adopter of aggressive pandemic restrictions that included a mask mandate, self-quarantine orders for travelers and a ban on public gatherings -- now capped at five people. And the state previously joined federal pilot project on testing and contact tracing. (Eddie Moore/The Albuquerque Journal via AP)

Stanley Perlman, professor of microbiology and immunology at the University of Iowa, told Xinhua that the United States is in the "worst part" of the pandemic, and will stay at this level for several weeks.

The country reported 105,142 new cases on Sunday and a record-high average daily increase at over 100,000 cases, according to data updated Monday by the U.S. Centers for Disease Control and Prevention (CDC), marking the fifth consecutive day that daily cases had surpassed 100,000.

The daily case count in the country set a new record on Friday at 132,830, which was an all-time high in the United States and around the world, according to the CDC.

The numbers of detected cases and hospitalizations are on the sharp rise in every region of the United States, according to the COVID Tracking Project. The seven-day average of deaths reported by states is now up 36 percent in the last three weeks.

"The number of people currently hospitalized has increased by 10k since October 30. At this rate, we'll see a record number of hospitalizations in just a few days," said the project.

A total of 715,000 cases were reported last week, which means that one in every 462 people in the United States tested positive for COVID-19 last week, according to the project.

"With more cases, we are again seeing vulnerable populations at risk, like the elderly. This will lead to more deaths," Perlman told Xinhua.

"We need to either continue or again lock down nursing homes and long term facilities," he noted.

Experts called for more caution from the public to guard against infections and stricter mitigation efforts to help bring the resurgence under control, including wearing masks, strict social distancing, reduced gatherings and better contact tracing.

Epidemiologists and health experts were optimistic about the results but also cautioned that more information is needed on the vaccine's long-term efficacy and safety.