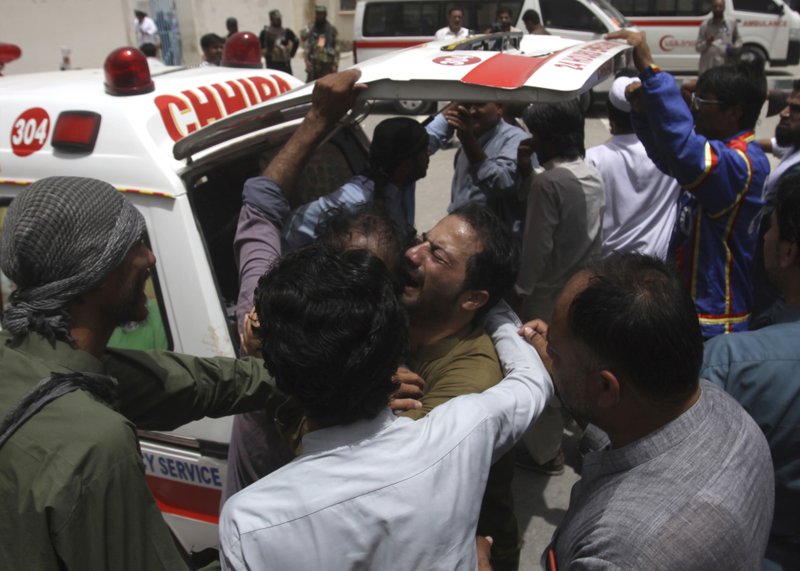 A man mourns the death of his family member at the site of a bombing in Quetta, Pakistan, Wednesday, July 25, 2018. (AP Photo/Arshad Butt)

Balochistan Inspector General of Police Mohsin Butt said that a suicide bomber riding on a motorcycle attacked a police vehicle in front of a polling station in the eastern bypass area of Quetta.

Police, rescue teams and security forces rushed to the site and shifted the bodies and injured to the Civil Hospital of the city. The security forces cordoned off the area and kicked off a search operation. A high security alert has also been announced across the province.

The hospital official confirmed to Xinhua that the death toll might further rise as five of the wounded are in critical condition. At least two children were among the killed.

Emergency has been declared in all the hospitals in the city.

The police officer said that the bomber attacked the vehicle of Deputy Inspector General of Police Abdul Razzaq, but he remained unhurt in the attack. Most of the victims were going to cast their votes when they came under the attack, the officer added.

According to the Bomb Disposal Squad, about 10 to 15 kilograms of explosives along with nuts, bolts and ball-bearings were used in the blast.

Apart from the Wednesday attack, over 180 people, including three candidates, have been killed and over 200 others injured in various terrorist attacks during the month of July.

Earlier on July 13, at least 152 people were killed and over 150 others sustained injuries in a suicide attack at a political gathering in Mastung district of Balochistan.

Pakistanis started voting for the country's one-day general elections on Wednesday morning to elect the next central as well as provincial governments.

According to the Election Commission of Pakistan, overall 820,000 security personnel have been deployed to maintain law and order during the election process, of which 371,000 are from the Pakistani army and 450,000 are from civilian law enforcement agencies.