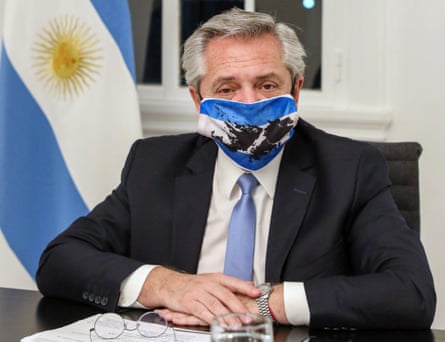 Agricultural exports to China and other countries will help Argentina's economic recovery in the wake of the COVID-19 pandemic and lockdown, according to Argentine President Alberto Fernandez.

In an interview with the Financial Times, Fernandez said the resumption next year of demand for Argentine grains from countries such as China will help the economy regain its footing after this year's "big fall."

Coupled with the resurgence in demand will be a series of government measures, including subsidies to stimulate the domestic market, public works projects and housing construction, Fernandez said in the interview released Sunday.

China was Argentina's second-largest trade partner in 2019, and the South American country's largest trade partner in April and May of this year. Its main exports to China's market are soybeans, frozen and deboned beef, shrimp and prawns, and animal or vegetable oils, Guillermo Chaves, the chief of staff of Argentina's Minister of Foreign Affairs, International Trade and Worship, recently told Xinhua.

At the end of May, the National Agricultural Food Health and Quality Service highlighted the consistency in beef, poultry and pork exports to China, despite the pandemic, with shipments to China increasing 17 percent in the first four months of 2020 year-on-year.

The Economic Commission for Latin America and the Caribbean on Wednesday estimated Argentina's economy will contract 10.5 percent this year due to the pandemic.

To counter the economic impact of the coronavirus, the government has announced several measures, including an Emergency Household Income that granted 10,000 pesos (150 U.S. dollars) in cash transfers to nearly 8 million people in April and May, and the Work and Production Assistance program, which postpones or reduces employer taxes, and calls on the state to pay up to 50 percent of the salaries of workers in the private sector.