MADRID, Sept. 13 (Xinhua) -- The heavy rainfall that has affected areas of east and southeast Spain in recent days claimed its third victim on Friday, when a man drowned after his car became trapped in a tunnel in the city of Almeria. 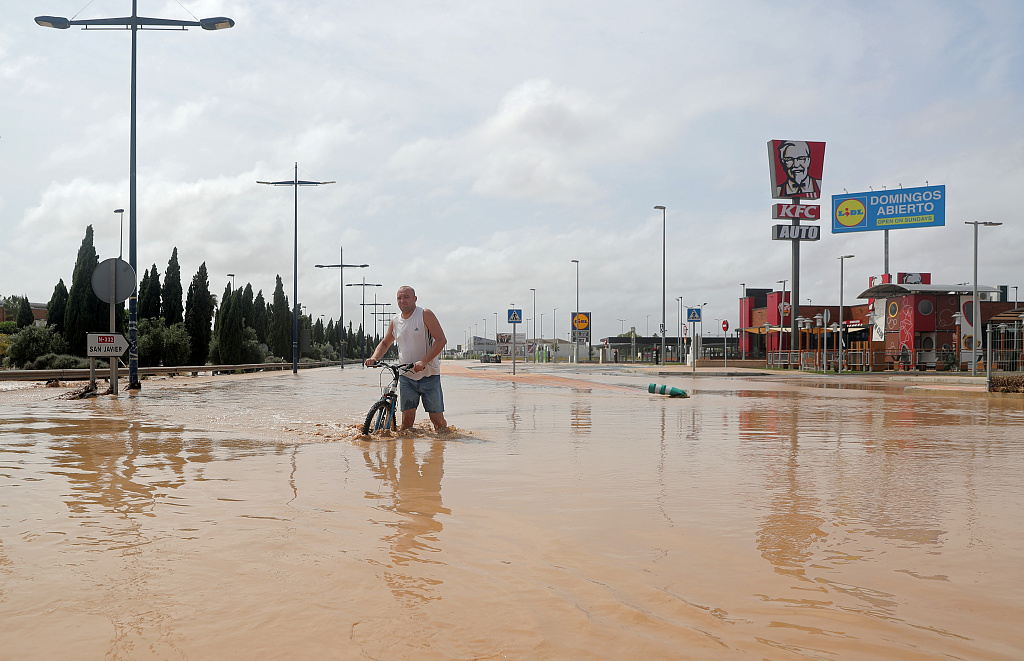 The Mayor of Almeria, Ramon Fernandez Pacheco, confirmed that the incident happened at around 5.30 a.m. local time when a vehicle carrying three people entered the tunnel "at a high speed."

Rescue services were able to save two people in the vehicle, but the third drowned.

This incident follows the deaths of middle aged brother and sister in the province of Albacete (southeast Spain) after their car was swept off the road by flood waters.

The Spanish State Meteorological Agency (AEMET) maintains a red "extreme risk" alert for extreme rainfall and high winds in the regions of Almeria, Alicante, Valencia and Murcia, with rainfall of up to 200 milliliters per square meter predicted for parts of these areas.

Some localities in the southeast received more than 300 milliliters of rainfall per square meter on Thursday and in the early hours of Friday, causing widespread damage.

Some 270 milliliters of rainfall were measured in the town of Ontinyent to the south of Valencia, where cars were swept away and walls collapsed as the River Clariano overflowed flooding nearby houses.

A tornado demolished a sports hall in the town of Denia, close to Alicante, and schools throughout the region remain closed.

Almeria Airport was closed because of the weather, while Spain's railway operator, RENFE, on Friday suspended main line train services between Albacete and Valencia and between Valencia, Alicante, Murcia and Cartagena due to the weather. RENFE explained that it is unable to offer an alternative service by bus between the cities, because so many roads have been washed out by the weather.

Elsewhere, 70 people were evacuated from a campsite in Cabo de Gata in southeast Spain and a further 400 were evacuated in the region of Murcia due to the risk of flooding.

The extreme weather is caused by something known in Spain as the "gota fria" (in English "cold drop"), which is a seasonal event caused by cold air from the north meeting air warmed by the Mediterranean Sea over the summer and producing intense storms and rainfall.