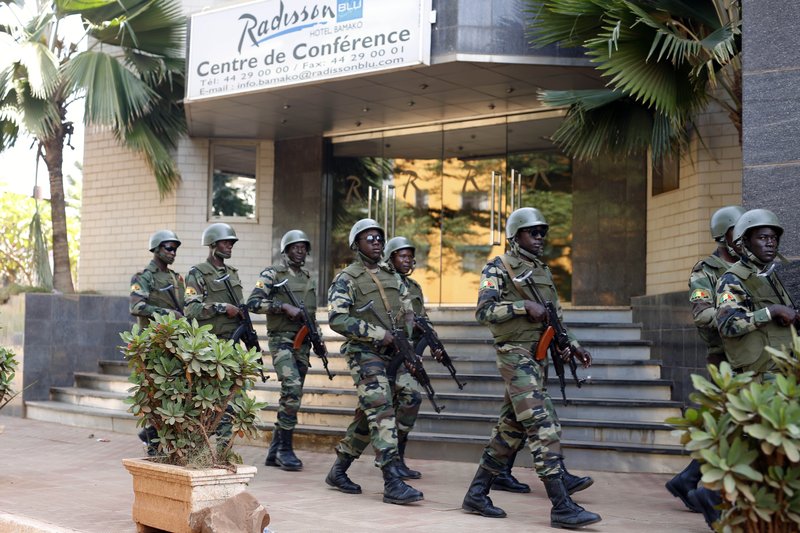 In this Saturday, Nov. 21, 2015 file photo, soldiers from the presidential guard patrol outside the Radisson Blu hotel in Bamako after it was attacked by Islamic extremists armed with guns and grenades. (Photo: AP)

Assaya Ngweba says Islamic extremists transformed his once-peaceful village in Burkina Faso, near the border with Mali, into “a place of misfortune and death.”

Now the 78-year-old is among half a million people who have fled the area this year as the extremists linked to al-Qaida and the Islamic State group increase attacks and expand their range in West Africa. Concerted military actions by five regional countries, along with a French operation, have failed to stem the violence.

The border between Burkina Faso and Mali is the latest flashpoint in the vast, arid Sahel region that stretches across Africa south of the Sahara Desert. In the past week at least 19 civilians have been killed by suspected extremists in Burkina Faso’s north.

The extremists have launched deadly assaults against the regional G5 Sahel counterterror force set up in 2017 with soldiers from Burkina Faso, Chad, Mali, Mauritania and Niger.

The attack in Boulikessi “was devastating for the military in terms of morale and strategic impact because it laid bare the jihadists’ strength in that crucial border region which is a bridge to Islamist expansion further south,” said Human Rights Watch’s West Africa associate director, Corinne Dufka.

Mali’s military had been trying to repair relations with Boulikessi’s wary population after a 2018 incident in which soldiers opened fire and killed civilians, a common abuse of power in both Mali and Burkina Faso, Dufka said.

Such actions by security forces push disaffected youth into the arms of extremists, experts say. Human Rights Watch has documented at least 200 executions since 2017 by Burkina Faso’s forces of civilians suspected of supporting or harboring extremists.

“Stopping atrocities in Mali and Burkina Faso are a key place to start for the international community in rethinking the strategy in the Sahel,” Dufka said.

The United Nations Development Program has said 71% of former recruits to extremist groups interviewed across Africa for a 2017 report pointed to the arrest, detention or killing of a family member or friend as a key driver of their path to extremism.

While Burkina Faso’s security forces are accused of being heavy-handed, Mali’s government might not be taking the increase in attacks seriously enough, said Judd Devermont, Africa program director with the Center for Strategic and International Studies.

Mali’s government should better address the drivers of instability, he said, but instead of sending more development and education resources to affected areas it prefers to focus on the more heavily populated south.

Even in the capital, Bamako, protests have emerged as people accuse the government of not doing enough to stop extremist attacks. Families of Malian soldiers protested this month as loved ones demand better equipment and training for the front lines.

Mali’s security forces leave many responsibilities in the central and northern regions to international forces including the United Nations peacekeeping mission and France’s Operation Barkhane, Devermont said, while turning a blind eye to armed militias. Extremists then exploit inter-communal conflict.

“The instability in the country is an existential threat,” he said.

Mali has been in turmoil since a 2012 uprising prompted soldiers to overthrow the country’s president and an alliance of Tuareg separatists and Islamic fighters took over large swaths of the north. A French-led intervention pushed the extremists from their strongholds but they remain active and are now moving into Burkina Faso, where some forested areas largely protect them from military air strikes.

The most formidable of the extremist groups are Jama’at Nusrat al-Islam wal Muslimeen, the Mali-based branch of al-Qaida and a multi-ethnic coalition, Devermont said.

Preaching in a variety of languages, the group is “adept at finding the divisions of communities and exploiting them,” he said. In Burkina Faso, the group waits to see how communities react to attacks before claiming responsibility.

Once-peaceful Burkina Faso experienced its first major extremist attack in 2015. The country is a gateway south into coastal West Africa, and regional leaders worry the extremists could be moving into Togo and Benin, where two abducted French tourists, an American and a South Korean were freed this year by French forces.

At the time, France’s president said the kidnappers were planning to hand over the hostages to “terrorists” in Mali.

The coordinator of a civil society group, the Popular Movement for Resistance, suggested that local defense groups should form as security forces fail to stop the extremists.

“Instead of fleeing from village to village, from province to province and to Ouagadougou, we will not move anymore,” Aly Nana said.