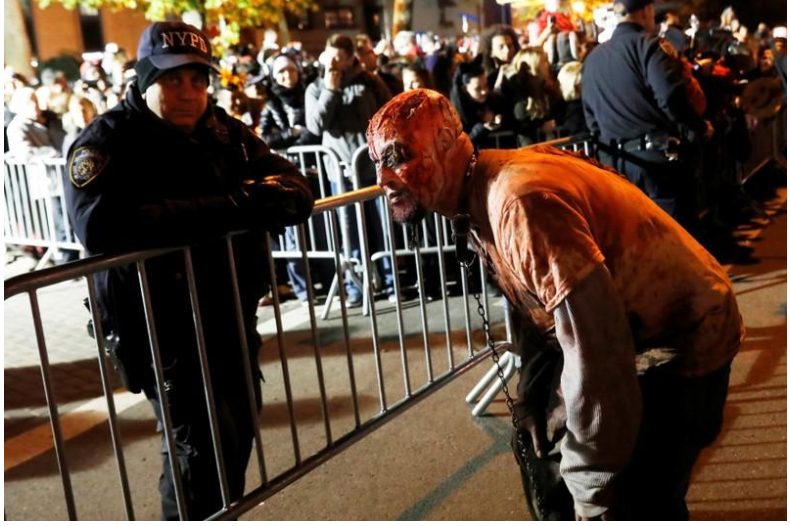 Thousands of merry-makers, many dressed in elaborate Halloween costumes, paraded through lower Manhattan on Tuesday, undeterred by the attack that unfolded just hours earlier when a driver mowed down dozens of people on a bike path a few blocks away.

Revelers who joined the 44th annual Village Halloween Parade said they were painfully aware that eight people were killed in what authorities say was an act of terrorism but carried on with the festivities to show fortitude and solidarity with the victims.

“You gotta live your life, you can’t let things like this discourage you,” said 60-year old Michael Spain along the route. “As sobering as they are, you still gotta come out and enjoy stuff like this - or they win.”

Thousands of people in costumes took part in the annual celebration along Greenwich Village’s Sixth Avenue, typically one of the nation’s largest Halloween parades. Hundreds of uniformed police officers maintained a steady presence throughout the mile-long route.

“Out of an abundance of caution, you will see an increase of NYPD personnel throughout NYC, including the Halloween Parade,” the New York City Police Department said on Twitter. Among the participants were a Rio de Janeiro-style group with the drums, witches and ghosts, and a massive Día de los Muertos group with 12-foot-tall skeletons.

“Tonight, we’re at a Halloween parade to say, you didn’t win and you didn’t affect us, and we’re out and we’re celebrating and we’re doing what New Yorkers do and we’re living our lives because we’re not going to allow the terrorists to win, Period,” New York Governor Andrew Cuomo told CNN.