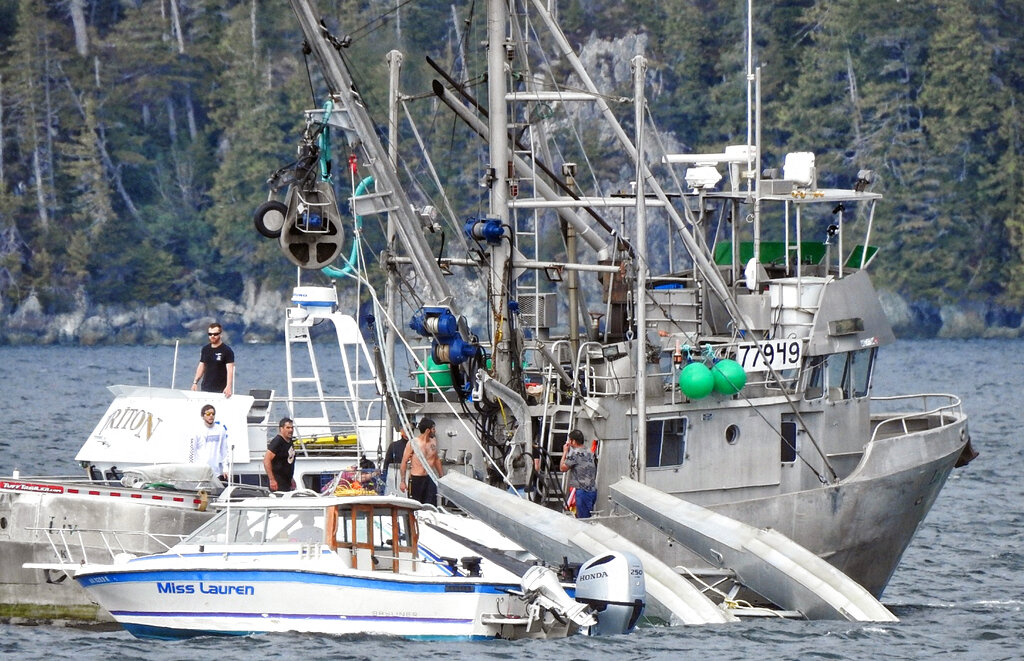 This Monday, May 20, 2019 photo provided by Aerial Leask shows good Samaritans off of fishing vessels attempting to bring in a floatplane that crashed in the harbor of Metlakatla, Alaska. (Photo: AP)

The halt of flightseeing and commuter flights is in place indefinitely, according to the Federal Aviation Administration.

The action comes after the passenger and the pilot of a Beaver floatplane operated by Taquan Air were killed when the single-engine aircraft crashed in Metlakatla Harbor on Monday afternoon during a 22-mile (35-kilometer) commuter flight from Ketchikan.

Witnesses reported to federal investigators that one of the two floats on the plane dug into the water during landing, causing the right wing to hit the water and then the aircraft to cartwheel several times, according to Clint Johnson, chief of the National Transportation Safety Board in Alaska.

Taquan Air officials did not immediately respond to requests for comment.

The passenger was identified by her employer and relatives in California as Sarah Luna. The Alaska Native Tribal Health Consortium said in a statement that Luna joined the group nearly a year ago as a senior epidemiologist in the liver disease and hepatitis program. Luna, 32, had flown to Metlakatla to provide health services to the community.

"Sarah embodied the characteristics most valuable to our team, as a person committed to improving the health and well-being of Alaska Native people," the organization wrote. "For those who worked most closely with Sarah, this loss is immeasurable."

The crash occurred in light winds and 10-mile (16-kilometer) visibility, Johnson said. The plane also was carrying a load of cargo and was supposed to also pick up other passengers after landing.

Johnson said it was "way too early" to determine a cause. He anticipates the preliminary report into the crash to be released by the end of the week.

Monday's crash followed the May 13 midair collision of a Taquan Air Otter floatplane with another floatplane. Six people died in that crash and another 10 people were injured. Both planes were carrying sightseeing cruise ship passengers.

Johnson said the NTSB is investigating both crashes as separate cases.

Last summer, all 11 on board another Taquan Air flight survived when the 72-year-old pilot confused snow on a mountain with a body of water and crashed on a rocky mountainside on Prince of Wales Island near the southern tip of the Alaska Peninsula.

A pilot and eight cruise ship passengers died June 25, 2015, when a de Havilland DHC-3 Otter operated by Promech Air Inc. crashed into mountainous terrain about 24 miles (38 kilometers) from Ketchikan, also as it was returning from Misty Fjords.

The NTSB later determined that pilot error, the company's culture and lack of a formal safety program were among the causes of that crash. Taquan Air purchased the assets of Promech in 2016, and currently employs three pilots who worked for Promech, a company spokeswoman said last week.