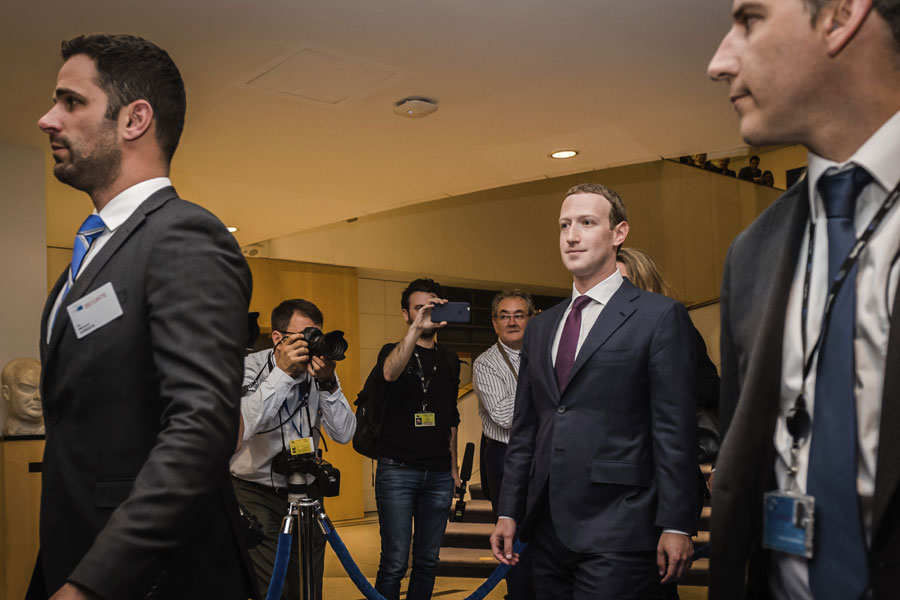 Facebook CEO Mark Zuckerberg leaves the EU Parliament after a hearing in Brussels on Tuesday. [Photo/Agencies]

European Union lawmakers have criticized Facebook founder Mark Zuckerberg after the tech guru appeared before them to apologize for the company's role in the Cambridge Analytica scandal, the proliferation of fake news, and to explain how he will comply with new EU privacy laws.

In the 90-minute session in Brussels with 12 of the European parliament's top party leaders, Zuckerberg acknowledged some Facebook tools were being used "for harm".

But his admission did not go far enough for some politicians, who said he had dodged questions.

The BBC reported on Wednesday that Damian Collins, chair of the United Kingdom's digital culture media and sport committee, complained the meeting was a "missed opportunity".

"Unfortunately, the format of questioning allowed Mr Zuckerberg to cherry-pick his responses and not respond to each individual point," Collins told the broadcaster.

The Financial Times newspaper said Philippe Lamberts, co-head of the Green party, said Zuckerberg failed to answer a single question he put to him.

And the Independent newspaper reported senior MEP Guy Verhofstadt warned Zuckerberg he risks being remembered as "a genius who created a digital monster". Verhofstadt said Facebook should break up its monopoly if it wants to leave scandals in its wake, something that was echoed by German MEP Manfred Weber, who noted Facebook owns rival services, including Instagram and WhatsApp.

It was the second time Zuckerberg has appeared before influential lawmakers. In April, he answered questions from United States politicians, with some of them also claiming he ducked important questions.

The format of the EU session saw politicians submit their questions in advance, with Zuckerberg choosing which to answer.

But Antonio Tajani, the EU parliament's president, criticized MEPs for wasting too much time speaking themselves, instead of putting Zuckerberg on the spot.

Tajani also noted at the news conference after the meeting that Zuckerberg would provide follow-up written answers.

In the wake of the Cambridge Analytica scandal, which saw data from millions of Facebook users harvested by a UK-based consulting company and allegedly used in political campaigns, Zuckerberg told MEPs other apps likely had similar breaches. He said an internal investigation is ongoing.

The Brussels meeting was initially slated to be held in private but was livestreamed after a backlash and accusations of secrecy.

Facebook has more than 2.2 billion users worldwide and dwarfs other social networks.

The Guardian newspaper, meanwhile, said the UK select committee investigating fake news wants Zuckerberg to appear before it. He has not responded so far.