WORLD Facebook suspends Trump for 2 years, then will reassess

Facebook announced Friday that former President Donald Trump’s accounts will be suspended for two years, freezing his presence on the social network until early 2023, following a finding that Trump stoked violence ahead of the deadly Jan. 6 insurrection at the Capitol. 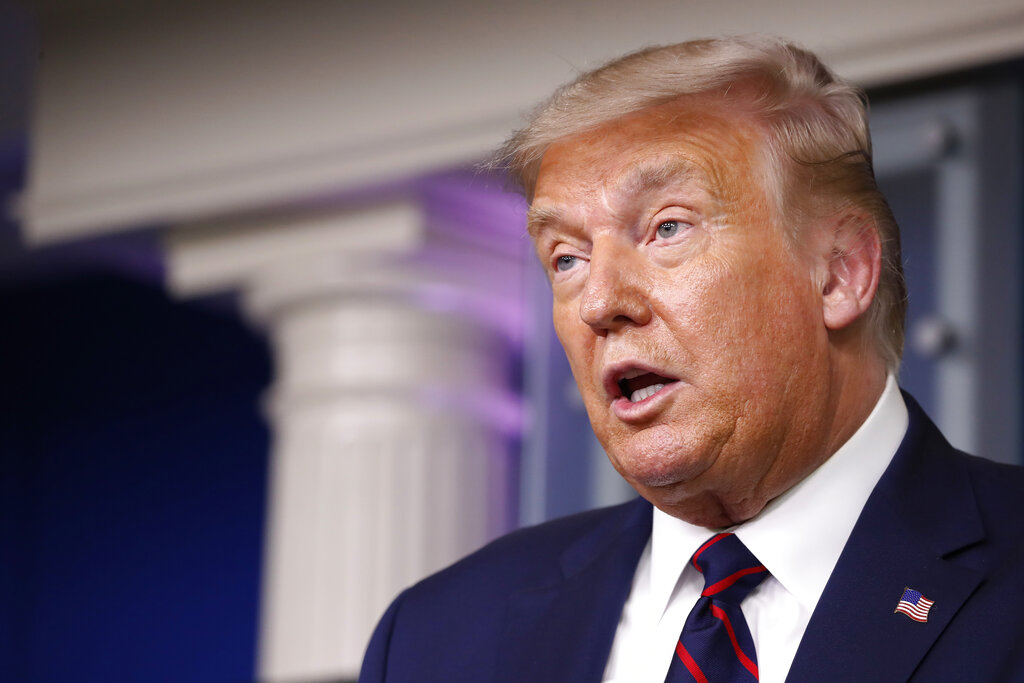 In this Tuesday, Aug. 4, 2020 file photo, President Donald Trump speaks during a briefing with reporters in the James Brady Press Briefing Room of the White House, in Washington. (Photo: AP)

At the end of the suspension, the company will assess whether Trump's “risk to public safety” has subsided, Nick Clegg, Facebook's vice president of global affairs, wrote in a blog post. He said Facebook will take into account “external factors” such as instances of violence, restrictions on peaceful assembly and other markers of civil unrest.

Facebook also announced that it would end a contentious policy that automatically exempted politicians from rules banning hate speech and abuse, and that it would stiffen penalties for public figures during times of civil unrest and violence.

The former president called Facebook’s decision on the suspension “an insult.” The two-year ban replaced a previous ruling that ordered Trump to be suspended indefinitely.

“They shouldn’t be allowed to get away with this censoring and silencing, and ultimately, we will win. Our Country can’t take this abuse anymore!” Trump said in a news release.

Social platforms like Facebook and Twitter have become indispensable tools for politicians to get their messages out and to raise small-dollar donations. Without the megaphone of Twitter and the targeted fundraising appeals his campaign mastered on Facebook, Trump could be at a serious disadvantage relative to other politicians.

Trump has teased running for president again in 2024. His aides say that he has been working on launching his own social media platform to compete with those that have booted him, but one has yet to materialize. A blog he launched on his existing website earlier this year was shut down after less than a month. It attracted dismal traffic.

“What they’ve done here is shield themselves from potential presidential rage” with a reassessment of Trump’s account in two years, said Jennifer Grygiel, a Syracuse University communications professor.

In a color-coded chart on its blog post, the company said public figures who violate its policies during times of crisis can be restricted from posting for a month (yellow) or as long as two years (red). Future violations, it said, will be met with “heightened penalties, up to and including permanent removal.”

The policy that exempted politicians from rules on hate speech and abuse was once championed by CEO Mark Zuckerberg. The company said it never applied the policy to Trump, but on Friday backtracked to say it did use it once, in 2019 for a video of a rally on his Facebook page.

The social media giant said it will still apply the “newsworthiness" exemption to certain posts it deems to be in the public interest, even if they violate Facebook rules. But it will no longer treat material posted by politicians any differently than other posts. In addition, Facebook said it will make public whenever it does apply the exemption to a post.

The announcements are in response to recommendations from the company’s quasi-independent oversight board. Last month, that panel upheld a decision by Facebook to keep Trump suspended, but the board said the company could not merely suspend him indefinitely. It gave the company six months to decide what to do with his accounts.

“We love you. You’re very special,” Trump said to the rioters in the first post. In the second, he called them “great patriots” and told them to “remember this day forever.”

Those comments violated Facebook’s rules against praising or supporting people engaged in violence, the board said. Specifically, the board cited rules against “dangerous individuals and organizations” that prohibit anyone who proclaims a violent mission and ban posts that express support for those people or groups.

The two-year suspension is effective from Jan. 7, so Trump has 19 months to go.

A group calling itself the Real Facebook Oversight Board, which is critical of Facebook and its oversight panel, said in a statement Friday that the ban brings Trump back just in time for the 2024 presidential election and shows “no real strategy to address authoritarian leaders and extremist content, and no intention of taking serious action against disinformation and hate speech.”

Due to its sheer size and power, Facebook's decision has broad implications for politicians and their constituencies around the globe. Chinmayi Arun, a fellow at Yale Law School’s Information Society Project, said it’s good that the company laid out a standard for when it will suspend political leaders and for how long.

“What’s tremendous is that Facebook took the oversight board’s recommendation to reevaluate the real-world context and the offline tensions, while deciding what to do with a politician’s online speech,” she said. But she remains concerned that suspensions cannot be reviewed unless Facebook asks.

For years, Facebook gave the former president special treatment and free reign to spread misinformation and threats on the platform. Outside critics and even Facebook's own employees called for the company to remove Trump long before the Jan. 6 comments.

Last summer, for instance, Zuckerberg decided to leave up posts by Trump that suggested protesters in Minneapolis could be shot, using the words “when the looting starts, the shooting starts.” Trump’s comment evoked the civil-rights era by borrowing a phrase used in 1967 by Miami’s police chief to warn of an aggressive police response to unrest in Black neighborhoods.

While Facebook put labels on many of Trump's election posts, he did not face penalties such as suspension for repeatedly and falsely claiming victory in 2020.

In Friday's post, Clegg anticipated criticism from both sides of the political aisle.

“We know that any penalty we apply — or choose not to apply — will be controversial. There are many people who believe it was not appropriate for a private company like Facebook to suspend an outgoing President from its platform, and many others who believe Mr. Trump should have immediately been banned for life,” he wrote.

Facebook's job, he said, is “to make a decision in as proportionate, fair and transparent a way as possible, in keeping with the instruction given to us by the Oversight Board.”

But by staying in the middle, some experts said Facebook had once again punted the decision instead of taking a firm stance.

“It’s the wait-and-see approach,” said Sarah Kreps, a Cornell professor and director of the Cornell Tech Policy Lab. “I think they’re hoping this can just resolve itself with him not being kind of an influential voice in politics anymore.”