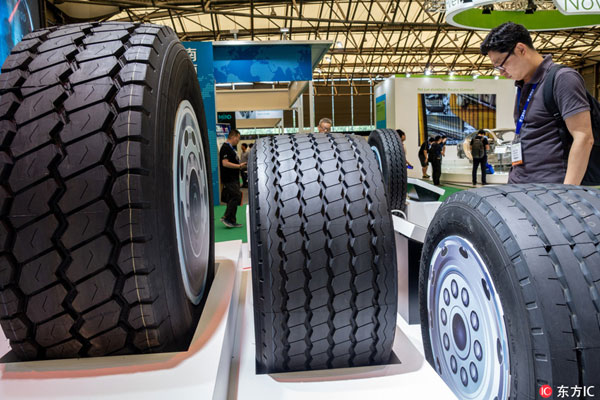 The US Trade Representative's Office is now holding a public hearing on the proposed tariffs on 200 billion US dollars worth of Chinese imports.

The hearings include several US family businesses who say they're being threatened by the proposed tariffs.

Amanda Walker and her family runs a tyre assembling company in Texas.

Established in 1985, her company now employs more than 100 people in Texas, Georgia, Iowa and Missouri.

They import tyre parts and components from China, assemble them and sell them to trailer and recreational vehicle makers in the United States.

Walker says steel wheel is listed on this round of tariffs.

She says if the tariffs become effective, her company will probably be forced out of business.

"We will probably close. Yes. You know, steel wheels are critical. We will be blocked. It will be hard for us."

Walker also says she feels the retaliatory approach being taken by the US government against China is dragging many innocent American family businesses into the swirl of US-China trade conflict involuntarily.

She says it will be extremely difficult to find different suppliers if the tariffs go ahead.

"So tyres are easy. Because there are a bunch of wonderful Chinese factories that own businesses in Thailand and Vietnam. That would be no problem. We would pivot. But steel wheels are critical," says Amanda.

Other business owners attending the hearing have also been expressing concerns.

After struggling to get her small business off the ground, Mosee says she feels her company - and her dream - are now both going down.

New surveys among small business owners has suggested the threat of tariffs on Chinese imports is already taking its toll, with respondings showing the lowest level of optimism since the 2016 presidential election.