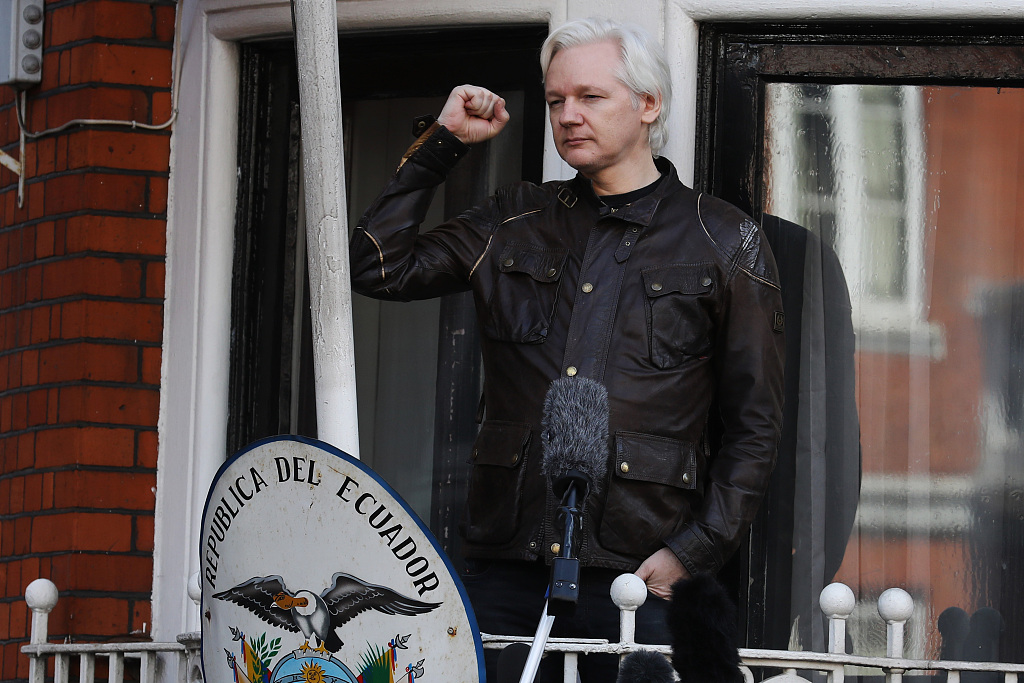 Julian Assange, founder of WikiLeaks, holds up a fist before speaking to media and supporters from a balcony at the Ecuadorian embassy in London, UK, on on Friday, May 19, 2017.  (Photo: VCG)

QUITO, Nov. 1 (Xinhua) -- Ecuador could revoke the asylum status granted to WikiLeaks founder Julian Assange if he fails to abide by new regulations governing his stay at the Ecuadorian Embassy in London, a top official said Wednesday.

"If Mr. Assange doesn't comply with these rules, obviously the Ecuadorian government will be able to reconsider its decision of having granted him asylum and revoke it," Attorney General Inigo Salvador said.

It was the latest sign of rising tensions between Ecuador and Assange, who has been held at the embassy since 2012, when the previous Ecuadorian administration granted the anti-secrecy activist political asylum.

Though the original Swedish allegations of sexual misconduct that drove Assange to seek asylum have long since been dropped, the British said they will arrest him as soon as he sets foot outside the embassy for having violated his parole terms.

Assange, who denies the allegations, believes the ultimate goal is to extradite him to the United States to stand trial for revealing state secrets.

The Ecuadorian authorities introduced a new set of rules in August which restrict Assange's rights to receive visitors and his online activities, and oblige him to pay for certain expenses, such as food.

Assange and his lawyer have pushed back against the new regulations. A strong-worded editorial in state daily El Telegrafo on Wednesday demanded that Assange play by the new rules.

"In keeping with a decent, humanitarian policy, the Foreign Affairs Ministry guarantees the restoration of access to communications, that is the Internet, but reminds that, as an asylee, he will not be able to make declarations or statements that interfere with other states or affect the interests of Ecuador," according to the editorial.

"The respect the state guarantees must be reciprocal ... and the Foreign Affairs Ministry affirms that it will not tolerate lies from that person," it added.

In December 2017, Ecuador granted Assange citizenship and requested that Britain give him diplomatic status, which was refused.