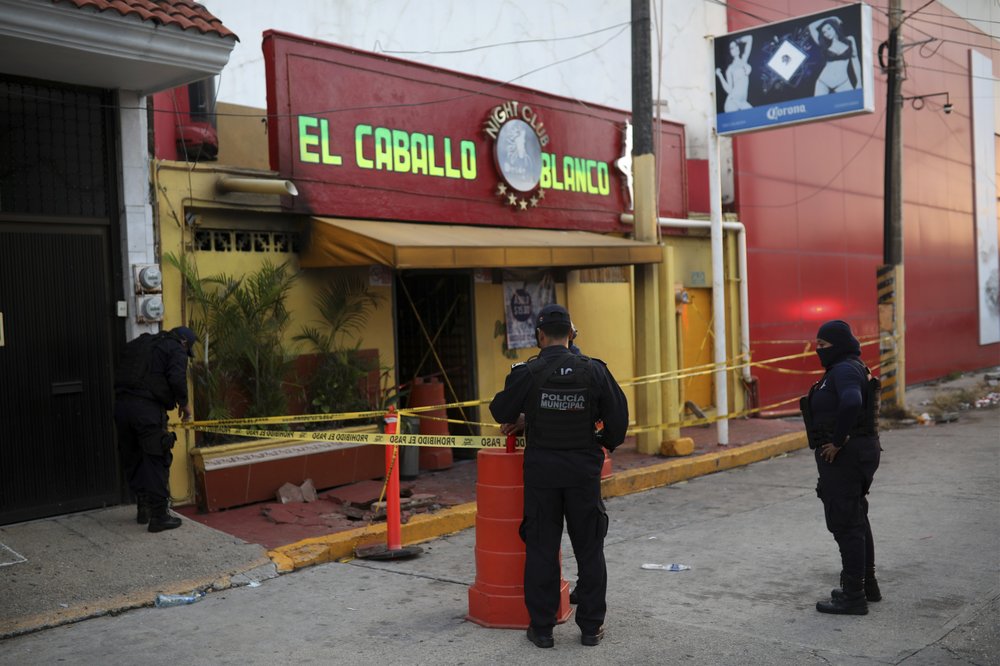 Police officers guard the scene outside a bar where more than 20 people died in an overnight attack, in Coatzacoalcos, Mexico, August 28, 2019. (Photo: AP)

Anger is mounting among relatives of 28 people who died horrendously when gang members set a bar on fire after blocking its exits. The families complained that criminals are out of control and making life impossible in this southern Mexico oil town.

President Andrés Manuel López Obrador said Thursday that the attack in Coatzacoalcos “degrades us as a society, as a government, as a nation” and said that crime and violence is the problem that worries him most.

Veracruz state, where Coatzacoalcos is located, has been one of many hot spots for that violence: Thousands have been kidnapped and disappeared in the state and in April gunmen broke into a family party and opened fire, killing 13 people and wounding at least four others.

Authorities are searching for the men who burst into the White Horse nightclub late Tuesday, taking over the entrance at gunpoint and dousing it with gasoline and setting the bar afire. The attack was apparently carried out by the Jalisco drug cartel in retaliation for the bar owner’s refusal to pay extortion demands.

But the state governor has acknowledged that authorities had several of the suspects in custody earlier on other crimes — but allowed them to be released.

Relatives of those killed at the White Horse bar said Wednesday they have lost trust in authorities.

“We don’t want a war, but we do want more firm action,” said Miguel Angel Ortiz, who was still waiting for confirmation that his mother, cleaning woman Rocio Gonzalez Ramos, 53, was among the dead.

“The justice system is upside down in Mexico,” Ortiz said. “Those who carry illegal weapons go free.”

Alicia Sierra, whose nephew Habib Ojeda Sierra, a 23-year-old grocery store worker and father of two, was among those killed, said she doesn’t want his death “to go unpunished, as have so many other crimes,” referring to the April killings.

“They should turn these suspects over to the people” so justice can be done, Sierra said, “because they (authorities) are just going to set them free.”

López Obrador has said “violence cannot be fought with more violence,” and has praised soldiers who have held fire even as they were disarmed by mobs. He says his programs of scholarships and apprenticeships will eventually attack the root causes of crime.

He has spoken of addressing Mexico’s crime problems with “hugs, not bullets,” and has insisted that Mexicans are “happy, happy, happy.”

Officials of his administration have even begun talks with vigilante groups, many of which are linked to drug cartels, though Lopez Obrador says he disapproved of those talks.

But patience in Coatzacoalcos was thin among the families preparing for funeral services for those who died of burns and smoke inhalation at the bar.

Lenit Enriquez Orozco, who has led a group of relatives of the disappeared in Coatzacoalcos, after her own brother vanished in 2015, said drug cartels “are feeling very empowered.”

“López Obrador says the people are happy, but this is not what you would call being happy,” she said, motioning toward the grieving families of the nightclub victims.

Anti-crime activist and businessman Raul Ojeda said the attack had all the hallmarks of an unmet demand for extortion payments. He said the Zetas and the Jalisco New Generation cartels and local gangs are currently fighting over control of the city

“They have been threatening all the businesses like that,” Ojeda said. “The ones that don’t pay close down or pay the consequences, as in this case.”

Among the dead were two Filipino sailors. Ramón Guzman, the agent for the ship Caribe Lisa, said the two men had gone on shore leave after their ship arrived from Houston and did not return.

López Obrador said local prosecutors should be investigated because “the alleged perpetrators had been arrested, but they were freed.”

Veracruz Gov. Cuitláhuac García identified the chief suspect as a man known as “La Loca” and gave his name as Ricardo “N″ because officials no longer give the full names of suspects.

García said the man had been detained by marines in July, but was released after being turned over to the state prosecutor’s office.

The state prosecutor’s office disputed that version, saying it had turned the man over to federal officials.