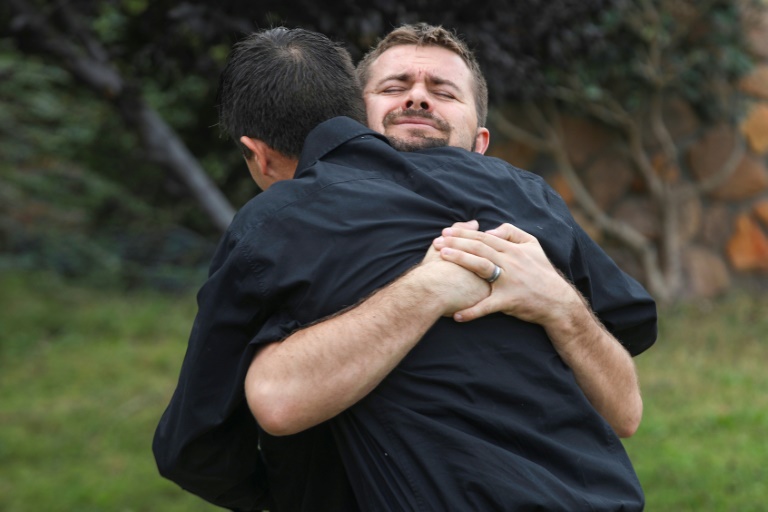 Relatives of the Mormon victims of an attack in Sonora, Mexico embrace during a wake at La Mora Ranch. (Photo: AFP)

Gathered under a large white tent in Rancho La Mora, a hamlet of neatly kept ranch-style houses and immaculately groomed pines, relatives sobbed, clutched each other in grief and struggled to find words for the magnitude of the family's loss.

"Dawna was a person who was full of life. She loved people," Karen Woolley, the mother of Dawna Langford, told AFP in a strained voice.

Langford, 43, was buried Thursday morning along with her sons Trevor, 11, and Rogan, two -- the first of several funerals to be held over two days.

Earlier, long convoys of cars carrying the victims' extended families from other parts of Mexico and the United States wound their way through the rugged mountains to the tiny hamlet, a collection of some 30 houses and five streets now tightly guarded by the Mexican army.

Relatives took turns filing past the children's coffins, which were decorated with family photographs, baby booties and signs reading "Angels" and "Daughters of the King."

"You can't imagine that there are people who can do a horrible thing like that. Innocent women, innocent children," said Kenneth Miller, whose daughter-in-law Rhonita was killed with her children Howard Jr, 12; Krystal, 10; and twins Titus and Tiana, eight months.

The victims, who had dual US-Mexican citizenship, were killed in a hail of bullets Monday on a rural road between the states of Sonora and Chihuahua, a lawless region known for turf wars between drug cartels fighting over lucrative trafficking routes to the United States.

Eight children managed to escape, six of them wounded. One 13-year-old boy helped the younger ones hide, then walked 22 kilometers (14 miles) home to get help.

The families involved -- the Langfords, Millers and LeBarons -- are part of a large group of US Mormons who emigrated to Mexico in the late 19th century, fleeing persecution for their traditions, including polygamy.

Now breakaways from the official Church of Jesus Christ of Latter-day Saints, which banned polygamy in 1891, they have lived in Mexico for generations, farming the land.

In a sign of their hardworking values, Rancho La Mora residents made the victims' simple coffins themselves, hammering the white wood together and sanding it down.

Another burial will be held Friday in LeBaron, Chihuahua, for family members who lived there, according to Mexican media reports.

Devastated relatives reject the assertion by President Andres Manuel Lopez Obrador's government that the victims were killed by mistake by a drug cartel defending its turf.

The community, which has taken up arms to fend off threats by gangs, believes it was deliberately targeted by criminals -- something that has happened in the past.

Benjamin LeBaron, founder of a crime-fighting group called SOS Chihuahua, was assassinated in 2009 after he led protests over the kidnapping of his teenage brother, who was released after the family refused to pay a ransom.

The massacre has caused shock on both sides of the border and prompted US President Donald Trump to call for a "war" on Mexican cartels.

Lopez Obrador again defended his security strategy, after a string of high-profile violent episodes, including a botched operation last month in which soldiers briefly arrested a son of jailed kingpin Joaquin "El Chapo" Guzman, then released him when they were outgunned by his cartel.

"We are applying a plan to transform (Mexico), despite all the obstacles," said Lopez Obrador, an anti-establishment leftist who took office in December 2018.

"We have achieved a lot in a short time... But there's still work to do."

Mexico has been hit by a wave of violence since 2006, the year the government controversially declared war on drug cartels.

Since then, the country has registered more than 250,000 murders.

Lopez Obrador has vowed a change in strategy, repeating the mantra "hugs, not bullets" and attacking what he sees as the roots of crime: poverty and inequality.

But Mexico appears on track to set a new murder record this year, with 25,890 so far.