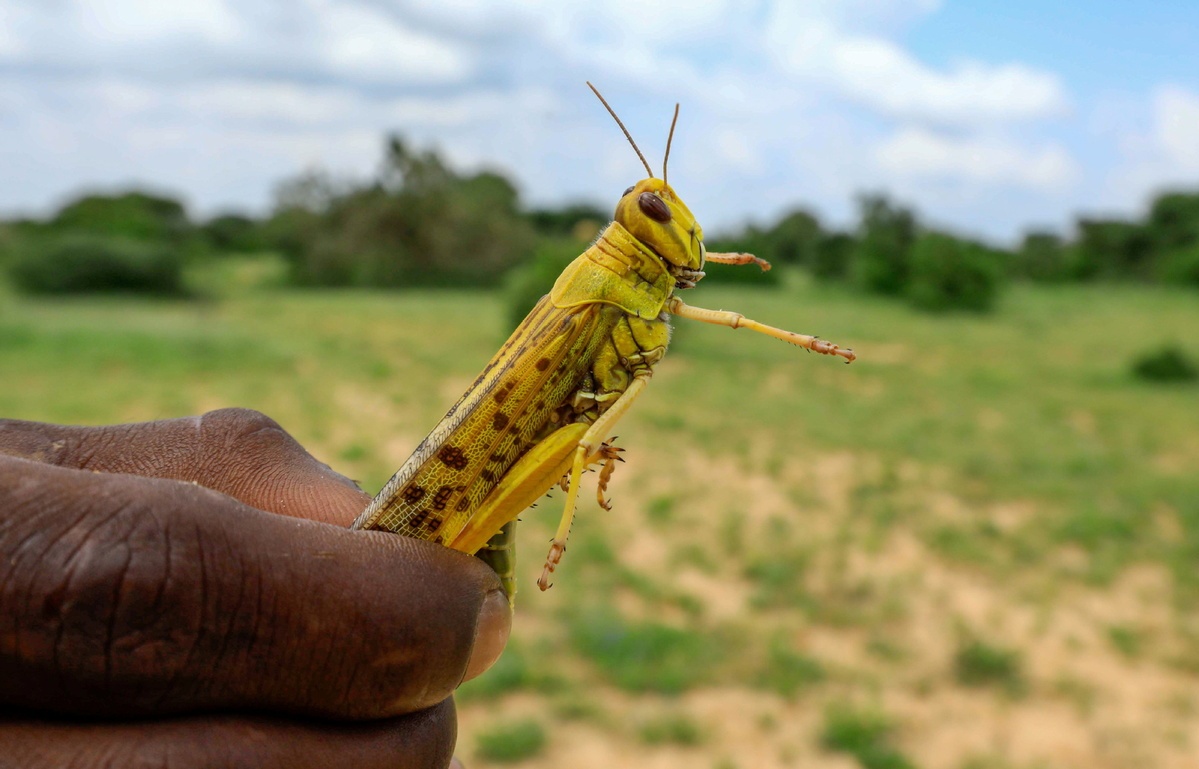 A farmer holds a desert locust in a grazing land on the outskirt of Daynile district of Mogadishu, Somalia Nov 13, 2020. [Photo/Agencies]

The UN Food and Agriculture Organization has warned that new immature locust swarms continue to slowly form from breeding in Somalia's northeast, where hopper bands persist near the coast. FAO added that a similar situation is likely to be in progress along Somalia's northwest coast, as at least one immature swarm was seen on the escarpment recently.

"More swarms are expected to form this month in both areas and disperse along the northern plateau, drifting west towards Aysha district in eastern Ethiopia. In Kenya, numerous small immature swarms persist in northern and central counties," the FAO said in its latest update released on Wednesday.

"While swarms arriving from Ethiopia and Somalia have declined, the highly mobile swarms present in Kenya are often seen many times, leading to multiple reports of the same swarm. Nevertheless, the number of swarms is declining," the FAO added.

According to the update, immature swarms persist in Ethiopia's Oromia region, including southern areas of the East African country's Rift Valley.

"Intensive ground and aerial control operations continue to make good progress in reducing the number of swarms in Kenya and Ethiopia, especially in the absence of significant rains that are required for maturation and breeding. In this way, spring breeding that is expected to occur from March to June is likely to be on a much reduced level, considering that the latest precipitation predictions continue to call for unusually dry conditions," the FAO said.

In Sudan, adult locusts are forming a few small immature swarms on the southern coast of the Red Sea, while small adult groups are forming in adjacent areas of Eritrea. However, control operations continue in all the affected countries.

The desert locust is among the most dangerous migratory pests in the world. According to the FAO, a 1 square kilometer swarm can consume the equivalent of food for 35,000 people in one day.

Previous infestations have destroyed hundreds of kilometers of vegetation in Ethiopia and tens of thousands of hectares of land in Somalia. There is a very high risk that swarms could appear in northeastern Uganda, southeast South Sudan and southwest Ethiopia without a rapid scale-up in control measures.

FAO added that climate change, which has led to severe weather extremes, including unusually heavy rains, has caused locust populations to explode. It said the upcoming rainy season will lead to further increases in swarms unless control measures rapidly scale up.

Speaking in Isiolo county in northern Kenya on Wednesday, Cyrus Oguna, the Kenyan government spokesman, said concerted efforts by all players, particularly the FAO, World Bank, the affected county governments and other agencies in the country, have led to great achievement in the pests' control.

"We could not have put down these measures of combating the invading locusts without the FAO input and therefore I congratulate them, as well as all other partners," Oguna said.

"This shows that the government is in full control of the menace and was ready for the ongoing campaign and any other unfamiliar invasion. I can, as well, confirm that the new swarms of locusts are not matured, hence it's easy to wipe them out," he added.