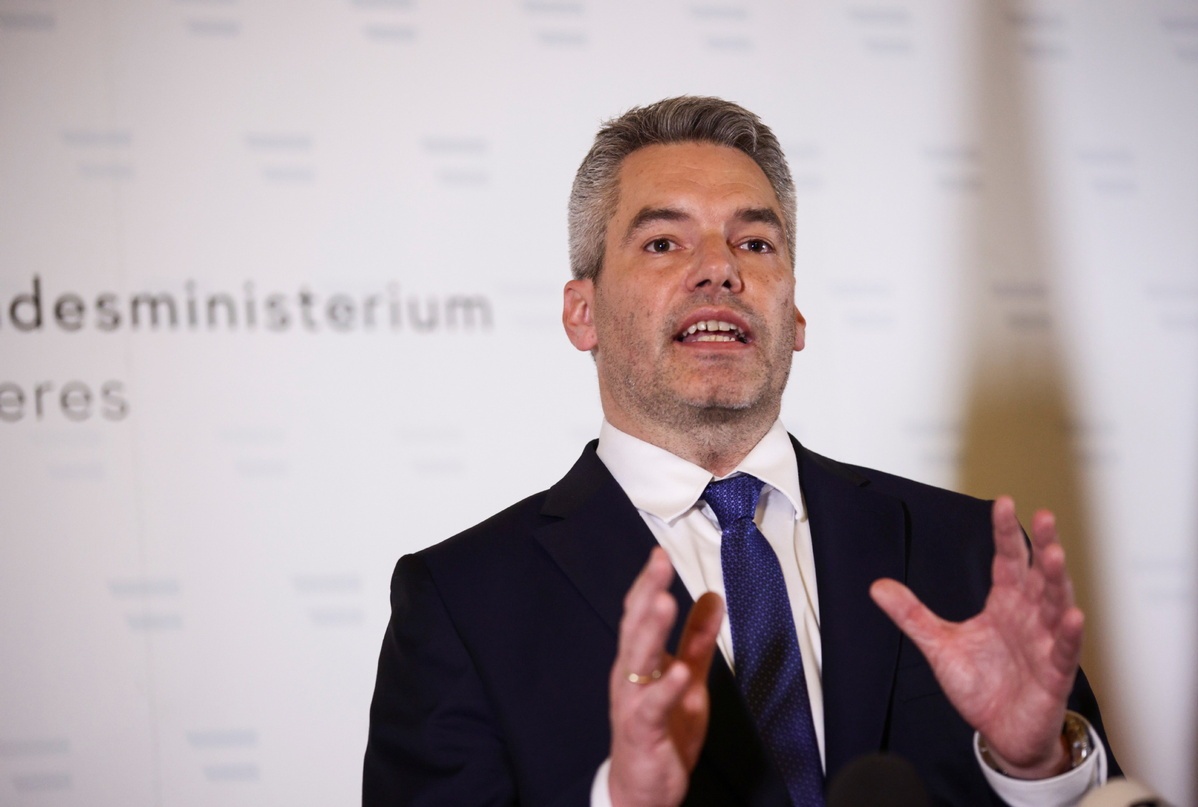 Austria's Interior Minister Karl Nehammer speaks during a news conference at the Interior Ministry after exchanges of gunfire in Vienna, Austria, on Nov 3, 2020. (Photo: Agencies)

Police in Austria have seized guns, grenades, cash, and drugs that they have connected to farright groups in Germany.

Interior Minister Karl Nehammer said on the weekend that five people were arrested during raids on homes and warehouses in the nation.

One of those detained was reportedly well-known to the authorities as a far-right extremist. Local media said there may also be a connection between the group and a far-right bombing campaign in the nation's capital, Vienna, during the 1990s.

"We have struck a massive blow against the right-wing extremist scene in Austria and organized crime, and how they are connected," Nehammer said during a news conference.

The Reuters news agency said the authorities believe the weapons had been stockpiled with the intention of "attacking society, democracy, and basic freedoms".

The arsenal, which included 25 semi-automatic weapons, was uncovered during an investigation into drug crime that began in October. Officers subsequently turned up links to far-right extremists and organized crime.

Michael Mimra, a spokesman from the Vienna police department, told reporters the guns looked to have been bought with money generated by drug trafficking that involved biker gangs.

He said police from the German states of Bavaria and North Rhine-Westphalia were also involved in the investigation and two people were arrested in Germany along with a large quantity of drugs.

Mimra said police now want to know where the weapons originated. "The investigation has only just begun," Reuters quoted him as saying. "It will last a while."

The Vienna newspaper Kurier said the cache included detonators and explosives as well as hundreds of weapons, among which were AK-47 assault rifles, Kalashnikovs, Uzi submachine guns, and around 100,000 rounds of ammunition.

The Times newspaper added that, in addition to explosives including trinitrotoluene and a substance similar to nitroglycerin, police seized 12.3 kilograms of amphetamine, 260 grams of cocaine, 110 grams of cannabis, and more than 5,000 euros in cash.

Many items looked to have been packaged, as if in preparation for shipping, the BBC reported.

The German state-owned broadcaster Deutsche Welle quoted Gerhard Purstl, Vienna's police chief, as saying the arms haul was the largest Austria had seen for many decades.

The Times newspaper said the authorities believe they have the ringleader in custody.

Al Jazeera, Qatar's state-owned broadcaster, added that all five men arrested in Austria, who were reportedly aged between 21 and 53, had links to neo-Nazi groups.