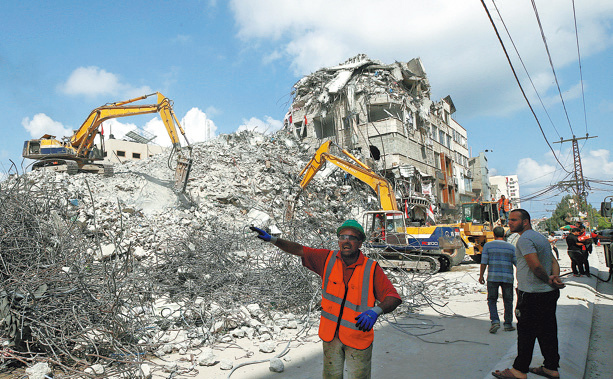 Bulldozers on Monday work to clear rubble from the site of an Israeli airstrike in Gaza last month. (Photo: Reuters)

JERUSALEM, Middle East－Far-right Israeli groups were scheduled to march in East Jerusalem on Tuesday in a flag-waving procession that risks igniting tensions with Palestinians in the contested city and rekindling violence between Israel and Gaza militants.

Assailing the march as a "provocation", Palestinian factions have called for a "Day of Rage" in Gaza and the Israeli-occupied West Bank. Gaza's Islamist rulers Hamas have warned of renewed hostilities if it goes ahead.

Hamas' spokesman in Gaza, Abdulatif al-Qanou'a, said in a statement that organizing "the so-called flag march is just a detonator for the breaking out of a new battle in Palestine".

"The so-called flag march that is intended to be organized by the settlers on the streets of Jerusalem will lead to a new battle to defend the holy city and Al-Aqsa Mosque," he said.

An original march was rerouted to avoid the walled Old City's Muslim Quarter on May 10 when tensions in Jerusalem led Hamas to fire rockets toward the holy city, helping set off 11 days of deadly fighting.

Israeli rightists accused their government of caving into Hamas by changing its route. They rescheduled the procession after an Egypt-mediated Gaza truce took hold.

A route change or cancellation of the procession could expose Bennett's patchwork coalition to accusations from Netanyahu, now in the opposition, and his right-wing allies of giving Hamas veto power over events in Jerusalem.

"The time has come for Israel to threaten Hamas and not for Hamas to threaten Israel," prominent far-right lawmaker Itamar Ben-Gvir said on Twitter.

An official route for the march has yet to be announced. Israeli media reported police will allow participants to congregate outside the Old City's Damascus Gate but will not let them cross through it to the Muslim Quarter, which has an overwhelmingly Palestinian population.

Palestinian protests were planned before the parade across the Gaza Strip. Hamas and Palestinian President Mahmoud Abbas's Fatah faction have called on Palestinians to flock to the Old City to counter the march.

"Urge all relevant parties to act responsibly & avoid any provocations that could lead to another round of confrontation," he said.

The Israeli military made preparations for a possible escalation in Gaza over the march, Israeli media reported. The US embassy in Jerusalem prohibited its employees and their families from entering the Old City on Tuesday.