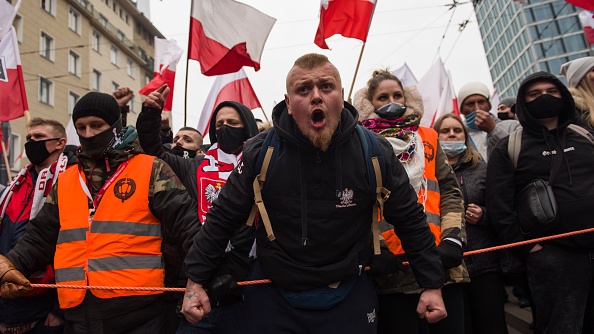 The far-right movement in Europe is "undergoing a broader and more fundamental shift" as it becomes "a transnational and post-organizational threat." The warning comes in a new collaborative report between three leading European anti-fascist research organizations: the British HOPE not hate, EXPO Foundation in Sweden, and the German Amadeu Antonio Foundation.

Editor Joe Mulhall write that while it continues to be important to study the trends in traditional far-right organizations like political parties, the modern far right is also changing.

"The European far-right scene today is a mixture of formalized far-right political parties, such as the Sweden Democrats, Vox in Spain, Lega in Italy and the AfD in Germany, and a series of looser, transnational far-right movements comprised of a disparate array of individuals collectively but not formally collaborating," he wrote.

Individuals everywhere donate time and money to the political goals of the movement outside traditional structures. Without formal leaders, they have "figureheads, often drawn from an increasing selection of far-right social media influencers." 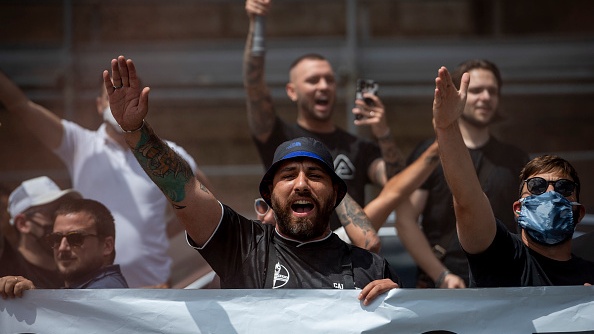 Betting shop workers and far-right political movements protest against the Italian government over economic problems faced due to the pandemic, on June 9, 2020 in Rome, Italy. (Photo: Getty)

Far-right movements can be "best understood as a many-headed hydra." When one leader falls, another one emerges, and they are "genuinely transnational" with members collaborating temporarily on certain issues and the network serving to pass information quickly.

Mulhal calls for a change in thinking, beyond political parties, formal organizations and even national borders. "The tools at our disposal to build a better, fairer, more united and collaborative world are also in the hands of those who are using them to sow division and hatred around the world," he concluded.

The affect of COVID on far-right parties

According to the report, the pandemic has had different impacts on the European far-right, depending whether they're being represented in government or not. The conclusion comes from a survey of 12,000 people in eight European countries: Sweden, France, Germany, UK, Hungary, Poland, and Italy.

Far-right parties in government recorded a plunge in support, while others benefited from unpopular government responses to COVID-19 or other issues. For example, in Italy, the Five Star Movement (more populist than traditional far-right and the largest ruling party in the governing coalition) has seen support drop from 28 percent in 2018 to just 12 percent, at the time of the survey, while the fascist Brothers of Italy is now at 12 percent, double the percentage in 2018. 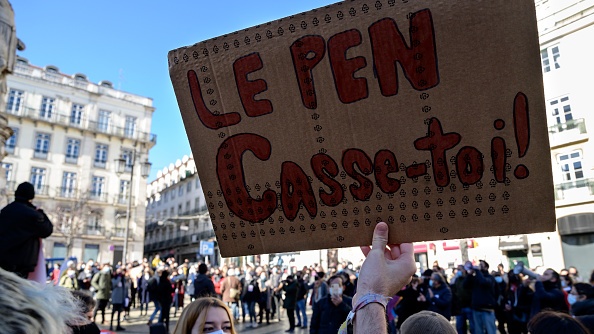 A demonstrator holds up a sign that reads "Le Pen leave" during a protest against the visit to Portugal of French far-right leader Marine Le Pen in support of Portuguese far-right party Chega, on January 10, 2021, in Lisbon, Portugal. (Photo: Getty)

In Sweden, where voters are concerned about crime more than health and immigration coming in third, the far-right Democrats are now at 21 percent support, against 16 percent in 2018. But in neighboring Poland, the ruling Law and Justice Party is now polling 18.4 percent, compared to 32 percent in 2019.

The survey concluded that "attitudes towards minorities are poor across all eight countries."

2020 was also the year Black Lives Matter (BLM) demonstrations took the streets, providing a common enemy for racial nationalist activists and organizations to push their political platforms to wider audiences.

The authors established that the far-right in Europe stepped away from its previous rhetoric of "cultural nationalism" to embrace increasingly overt racial politics in response to BLM. But it remains uncertain if the shift to racial nationalism will be long-term. 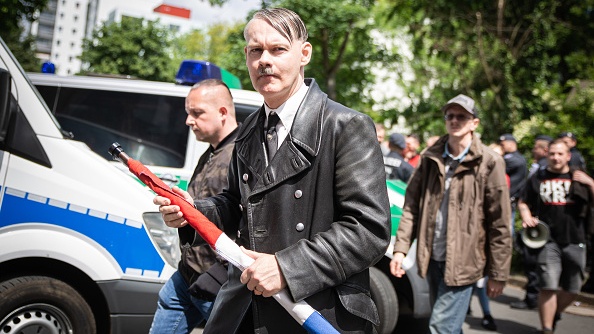 On May 25 2019, the far-right party Die Rechte held their final rally for the upcoming European election in Dortmund, Germany. Around 200 Neonazis joined the demonstration through Dortmund Hörde. Among them were activists from France, Hungary, Bulgaria and the Czech Republic. (Photo: Getty)

Conspiracy theories on the rise

The promoters concluded that 2020 saw a dramatic increase of conspiracy theorists. Many protest groups appeared in Europe, "driven by a strongly anti-elite, anti-lockdown and anti-vaccine agenda," but still, most of the people surveyed supported the measures.

The pandemic "ushered in a new age of conspiracy theories as people seek comfort in simple and monocausal explanations for a world seemingly out of control," Mulhall wrote.

The report alerts for the fact that "COVID-19 related conspiracy theories have provided a worrying new route towards anti-Semitic politics." For example, "Holocaust denial and admiration for Hitler are a progression through different conspiracy theories, which may contain anti-Semitic undertones but do necessarily require them.”

When it comes to the COVID-19 vaccine, the majority dismissed claims of malicious use to infect people with poison, but still 22 percent of Poles, 20 percent of Hungarians and 16 percent of Italians surveyed believed that was the case, while in the UK only 7 percent said they believed in the idea.

The survey also covered the QAnon claim that "Hollywood's elite, governments, media and other high officials are covertly involved in large-scale child smuggling and exploitation," and here there was more support. One-third of respondents in Poland believe this claim to be definitely or probably true, while only 27 percent think it is false.

QAnon is now "a decentralized, grand and multifaceted phenomenon, at once a conspiracy theory, a political movement and a quasi-religion," that has swiftly spread to Europe in full force.