The polls opened for Swedish legislative elections Sunday with the far-right expected to notch up a record score as voters unhappy about immigration punish one of the few remaining left-wing governments in Europe. 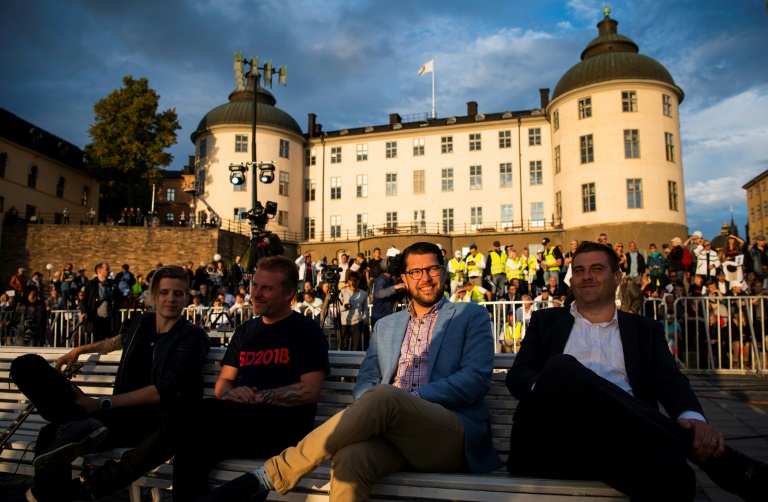 The leader of the far-right Sweden Democrats, Jimmie Akesson (centre), faced shouts of "no racists on our streets" as he campaigned. (Photo: AFP)

Opinion polls suggest the anti-immigration Sweden Democrats (SD) could garner between 16 and 25 percent of the vote, making it one of the biggest parties and almost impossible to predict the make-up of the next government.

The party with roots in the neo-Nazi movement has called the arrival of almost 400,000 asylum seekers since 2012 a threat to Swedish culture and claims they are straining Sweden's generous welfare state.

The traditionally two largest parties, the Social Democrats and the conservative Moderates, are expected to win around 40 percent of the votes combined, down 10 percentage points from the last elections in 2014.

Candidates from the eight parties campaigned down to the wire on Saturday, targeting in particular the 20 percent of the 7.5 million eligible voters still undecided, according to pollsters.

"I'm still hesitating between the Moderates and SD. SD is quite close to the Moderates but they're a little more clear in what they want. They're more direct," Elias, an 18-year-old voting in his first election, told AFP.

Social Democrat Prime Minister Stefan Lofven has repeatedly called the elections a "referendum on the future of the welfare state".

But the far-right SD has presented it as a straight vote on immigration and integration, after Sweden took in more than 160,000 asylum seekers in 2015 alone, the most in Europe on a per capita basis. 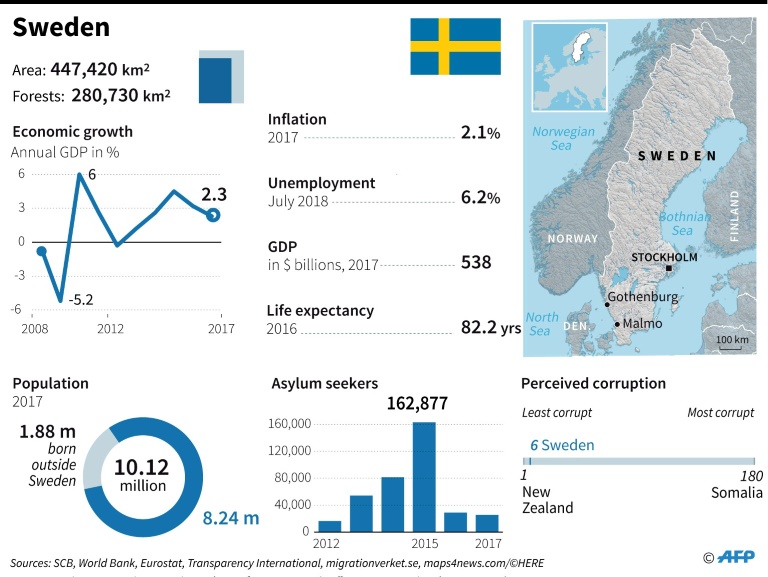 On the eve of the election, Lofven condemned "the hateful forces" in Sweden.

He urged voters to "think about how they wanted to use their time on Earth", calling on them to "stand on the right side of history".

Moderates leader Ulf Kristersson said that after the election, Sweden would need "a strong cross-bloc cooperation to isolate the forces... pushing for Sweden to withdraw from international cooperation".

In southern Sweden, an SD stronghold, party leader Jimmie Akesson campaigned among throngs of supporters as detractors booed him and shouted "No racists on our streets!"

"We're now competing against the Social Democrats and Moderates to become the biggest party in the country," he said, dismissing the protesters as "communists".

Polling stations opened across the country at 8:00 am (0600 GMT) and close at 8:00 pm, with first estimates expected soon afterwards.

Final results are due before midnight (2200 GMT) but the composition of the next government may not be known for weeks.

Deal with 'the devil'

Neither Lofven's "red-green" bloc nor the opposition centre-right four-party Alliance (Moderates, Centre, Liberals and Christian Democrats) were expected to win a majority in parliament.

Lengthy negotiations will be needed to build a majority, or at least a minority that cannot be toppled by the opposite side.

Lofven, whose minority government made up of the Social Democrats and the Greens with the informal support of the ex-communist Left Party, has managed to hang onto power by sealing deals with the right-wing on energy and migration, among other things.

But the opposition is intent on ousting Lofven, with some Moderates willing to go so far as to put an end to SD's pariah status and open negotiations with them.

That could prove fatal for the Alliance, with the Liberal and Centre parties repeatedly ruling out a deal with "the devil", as Akesson occasionally calls himself.

In an interview with AFP during the campaign, Akesson stressed he would "lay down his terms" after the election, citing immigration policy, crime-fighting and health care as priorities.

He sparked an outcry during a televised debate on Friday when he said foreigners had more difficulty finding jobs "because they're not Swedes".

"They don't fit in in Sweden and of course then it's hard to find a job."

That prompted Centre Party leader Annie Loof to bang her fist on her podium, retorting angrily: "How can you talk that way?!"

Akesson's remarks, and the raw tone unusual in Swedish debates, triggered a wave of criticism.

Meanwhile, refugee aid associations said they have noted "anxiety" among asylum seekers over the far-right's surge.

"I've lived here for almost three years, I've learned the language. What will happen to me if they enter government or gain influence," asked Mohammad, an 18-year-old Afghan refugee who spoke perfect Swedish when interviewed by AFP.