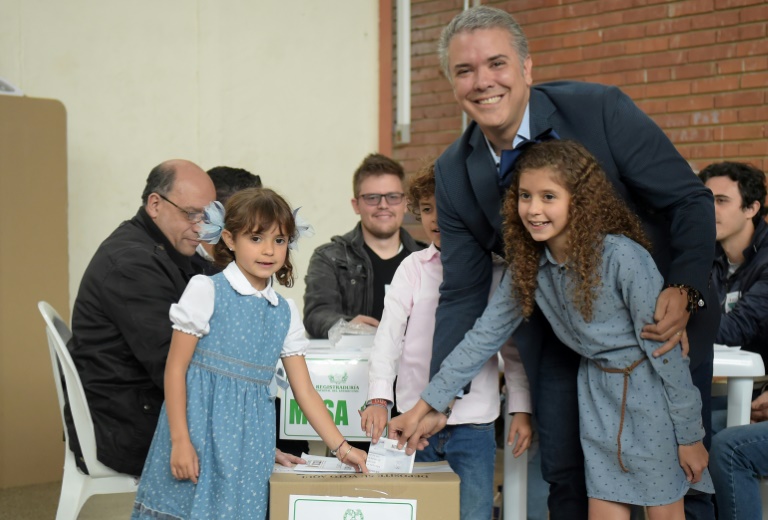 The front-runner in Colombia's presidential run-off, conservative senator Ivan Duque casts his ballot surrounded by his children -- he wants to overhaul a 2016 peace deal with leftist FARC rebels (Photo: AFP)

Voters in Colombia went to the polls Sunday to choose a new president in an election that has turned into a referendum on a landmark 2016 peace deal with FARC rebels, which conservative front-runner Ivan Duque wants to overhaul.

His efforts to end the war with the Revolutionary Armed Forces of Colombia (FARC) brought him the Nobel Peace Prize, though he is leaving office with record unpopularity in a country of 49 million people.

Duque comfortably won the first round last month, having campaigned on a pledge to rewrite the agreement signed by Santos.

Vehemently opposed to the peace deal, the 41-year-old Duque says he would revise it in order to sentence guerrilla leaders guilty of serious crimes to "proportional penalties."

On Sunday, as he voted surrounded by his children, Duque said he wanted to make sure that those who commit crimes "pay for them."

The former economist and first-term senator says he wants to keep former FARC rebels from serving in Congress, enshrined in the agreement, under which the group transformed itself into a political party.

Duque is buoyed by the backing of his popular mentor, former president and now senator Alvaro Uribe, whose two-term presidency from 2002-2010 was marked by all-out war on the FARC.

Petro, 58, is the first leftist to reach a presidential runoff in Colombia, and believes his presence shows the South American country has shed its suspicions of the left, tainted by 50 years of conflict.

A former member of the disbanded M-19 guerrilla group, he says he will implement the agreement with the FARC, whose 7,000 ex-combatants have struggled to return to civilian life.

FARC leader Rodrigo Londono, known as Timochenko during the conflict, said Sunday: "With either one of the two (candidates), we cannot let down our guard."

Highlighting Colombia's glaring inequalities during his campaign, Petro has said that if elected, he will buy out land owned by the big agro-industrial companies and redistribute it to poor farmers.

The latest polls show Duque, a candidate for Uribe's Democratic Center party, would beat Petro by between six and 15 points on Sunday. Polls close at 4:00 pm (2100 GMT).

"Whoever becomes president, the biggest challenge will be to adopt a clear position on the peace agreement because, for the moment, we are in limbo," Fabian Acuna, professor of political science at Colombia's Javeriana University, told AFP.

"It will be very costly to go backwards," Acuna warned.

In the campaign's home stretch, both candidates have concentrated on forming the alliances seen as critical to victory.

Supporters of centrist ex-Medellin mayor Sergio Fajardo, who narrowly missed out to Petro in the first round with nearly 24 percent of the vote, will weigh heavily on the outcome.

Analysts believe Fajardo's supporters are less likely to support Petro, and his best bet may be to lure votes from the 47 percent of the electorate that did not turn out in the first round.

If elected, Duque will become Colombia's youngest president since 1872.

According to Andres Ortega of National University, he will "arrive with a very strong coalition in Congress," where the right swept the polls in March legislative elections.

FARC withdrew from the presidential elections, having suffered a drubbing in its first electoral contest as a political party in March, polling less than half a percent.

It still gets 10 seats in Congress as a result of the peace agreement -- a clause Duque is intent on scrapping.