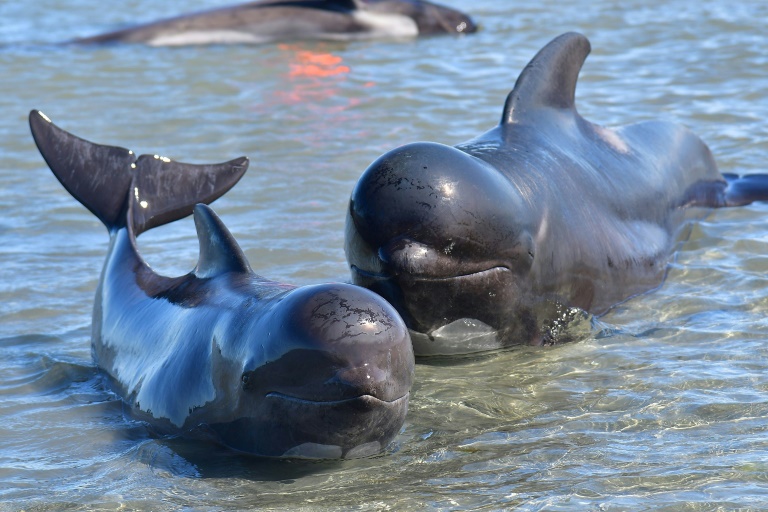 Pilot whales feed primarily on squid and have a distinct, rounded head with a very slight beak (Photo: AFP)

For centuries, the Faroe Islands have hunted pilot whales in ritual fashion, herding them into shallow waters to beach them before stabbing them with knives, turning the water a bloody red.

The "grindadrap", as the practice is known, has been blasted by animal rights activists as cruel and inhumane, but Faroese Fisheries Minister Hogni Hoydal insists it is "ecological" and "respectful."

Q: Why is this hunt, which is so controversial abroad, considered essential in the Faroe Islands?

A: "The main issue with the 'grind' is that it's part of the living resources in our waters. We base our whole existence and our modernisation as a welfare society and as a part of the world on the sustainable use of the living resources of the sea. The pilot whale has been part of that for more than a thousand years. And we actually see our legislation and our whole system of 'grind' catches as the most sustainable use of marine living resources. We have statistics going back 450 years where we can prove that we have never taken more than approximately one percent of the whole population of the 'grind' stock in the North Atlantic.

So when we discuss this, especially with some environmental agencies that are protesting against the 'grind', we say 'well, perhaps this is the example of the most ecological, the most sustainable and the most controlled harvesting of marine resources.'

If we do not use the whales, we would have to import cattle, meat from cattle, chicken and so on, that are produced under, in my opinion, the worst conditions for animals and not a viable way, in an industrialised way that has led to pollution of our environment and that has led to the destruction of almost every wild living resource of the world.

So we see ourselves as the leaders of sustainable use of natural resources where we do not overexploit, where we have huge respect for the animals, where we only take a very small part of a viable population."

Q: So the whale hunt is good for the planet?

A. Importing meat "would increase our carbon footprint. Is it better to buy industrialised chicken or industrialised meat from cattle? I do not understand the perspective from some of these organisations that, in my opinion, are important because they're focusing on the ecological future of the world. But this is the example of the best ecological management of marine living resources and, in my opinion, the best documented and also the most respectful."

Q. But isn't there still a risk that the image of the Faroe Islands will be indelibly linked to the bloody images of the hunt?

A. "We do not see it as a problem. It has been a problem. There have been huge campaigns. Especially some organisations have been very violent when coming to the Faroe Islands.

But my experience is that when people come here and experience the actual issue here about sustainable use of marine resources... the social system here that is perhaps the only place in the world where you can distribute food without commercial interests... I think people come to respect (it), though I can understand, especially for people who have not seen a big animal being killed, that it's of course an image that can evoke some feelings.

In my childhood we also had sheep that we killed, so it's also a natural part of modern life on the Faroe Islands to know where the food comes from."