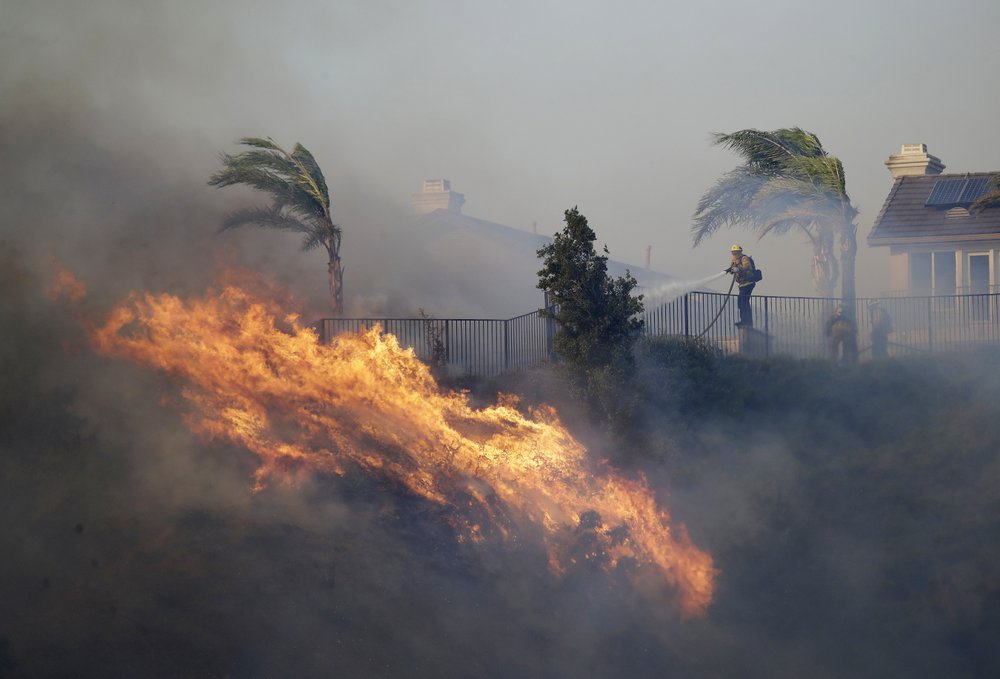 An aggressive wildfire in Southern California seared its way through dry vegetation Friday and spread quickly, destroying dozens of homes as tens of thousands of residents scrambled to get out of its way, authorities said.

The blaze broke out Thursday evening in the San Fernando Valley and spread westward, burning its way into hilly subdivisions on Los Angeles’ northern edge as terrified residents grabbed what they could and ran. One man went into cardiac arrest and died, authorities said.

Those who left included Edwin Bernard, who said he never saw the flames arrive so quickly or come so close to his home as this time.

He watched as the fire swept down a hillside, sizzling through dry grass and igniting trees and bushes and spitting embers over his home of 30 years. He and his wife fled in their car, leaving behind medication, photo albums and their four cats.

“It was a whole curtain of fire,” Bernard said Friday. “There was fire on all sides. We had to leave.”

The region has been on high alert as notoriously powerful Santa Ana winds brought dry desert air to a desiccated landscape that only needed a spark to erupt.

The Los Angeles fire broke out hours after flaming garbage in a trash truck sparked another blaze when the driver dumped his load to keep the rig from catching fire. But the dry grass quickly ignited and powerful winds blew the flames into a mobile park in Calimesa, about 75 miles (120 kilometers) east of downtown Los Angeles. About three-quarters of the 110 homes were wiped out and one resident died, fire officials said.

The two fires burned as power was restored to more than half the nearly 2 million residents in the northern part of the state who lost electricity after the Pacific Gas and Electric Co. switched it off on Wednesday to prevent a repeat of the past two years when its equipment sparked deadly, destructive wildfires during windy weather.

Officials had worried that gusts might topple trees on and blow other vegetation into transmission lines and start wildfires, but the move was widely criticized for targeting areas that faced no danger, and for disrupting so many lives.

On Friday, the outage was blamed for the death of a man dependent on oxygen who died about 12 minutes after the utility pulled the plug, El Dorado County Fire Chief Lloyd Ogan said.

The fire on Los Angeles’ northern edge erupted in the neighborhood of Sylmar in a giant plume of red glowing smoke that could be seen for miles. It spread westward at a rate of 800 acres (324 hectares) into Granada Hills and Porter Ranch, where subdivisions crowd against the foothills of the Santa Susana Mountains. Its cause wasn’t immediately known, and about 100,000 people in over 20,000 homes were ordered to evacuate, Los Angeles Police Chief Michel Moore said.

Porter Ranch, an upper middle-class suburb that was the backdrop for the 1982 movie “E.T.” is no stranger to evacuations. Four years ago, a blowout at a nearby underground natural gas well drove 8,000 families from their homes for more than 100 days. The community also sits next to Northridge, which was epicenter of a rattling earthquake 25 years ago.

By Friday, the fire had grown to more than 11 square miles (29 sq. kilometers) and at least 25 homes had been damaged, Fire Chief Ralph Terrazas said. A middle-aged man who was near the fire went into cardiac arrest and died, the chief said, but he did not have details.

Terrazas said strong winds and dry weather were contributing to the danger.

“As you can imagine the embers from the wind have been traveling a significant distance which causes another fire to start,” Terrazas said.

Jonathan Stahl was driving home to Valencia when he saw the smoke and immediately diverted to a mobile home park in Sylmar where his grandmother lives.

The park had been nearly wiped out in 2008 when one of the city’s most destructive fires leveled 500 homes.

“Oh my God, it’s coming this way,” his grandmother, Beverly Stahl, 91, said when he called.

Stahl helped his grandmother, who was in her pajamas, and his aunt who lives with her, pack clothing, medication and take their two dogs. They saw flames in the distance as they drove away.

“We just packed up what we could as fast as we could,” Stahl said at an evacuation center at the Sylmar Recreation Center, massaging his grandmother’s shoulders as she sat in a wheelchair with a Red Cross blanket on her lap. “If we’d stuck around, we would have been in trouble. Real big trouble.”

At the site of the other fire, in Calimesa, residents of the trailer park anxiously waited to see if their homes had survived the fast-moving blaze.

One worried resident said he couldn’t reach his 89-year-old mother after she called to tell him she was evacuating.

He said neighbors saw his mother, Lois Arvickson, in her garage as flames approached and later saw the garage on fire, but they didn’t know if she’d managed to escape.

Melissa Brown said she moved to the mobile home complex earlier this year from Arizona, in part to help take care of her mother who has since died. Brown said she now also faces the loss of her home.

“The hardest part is my mom’s remains are in there,” she said Friday morning, choking back tears.