WORLD Fast, not so furious? Europe wrestles with electric scooters

Fast, not so furious? Europe wrestles with electric scooters 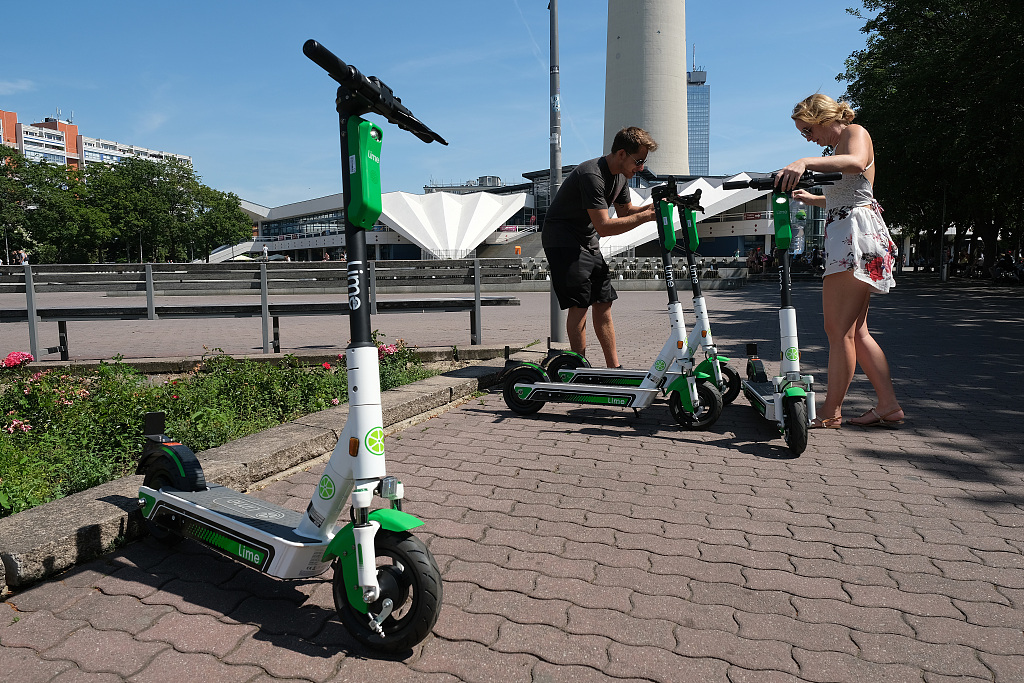 A couple visiting from Colorado who said they did not mind being photographed rent Lime electric scooters in the city center on June 25, 2019 in Berlin, Germany. (File photo: VCG)

Proponents call them a leap into the future, an exhilarating, app-based way to zip from the Louvre to the Eiffel Tower without generating planet-choking pollution.

Rubbish, say critics, noting growing numbers of injuries and even deaths involving e-scooters. They decry a new nuisance to pedestrians, cyclists and drivers who are already battling for the limited space on city streets.

Across the U.S., cities are also struggling to regulate companies renting the vehicles and keep riders safe. Here's what some European countries are doing about it:

France's government met Monday with the victims of scooter accidents as it prepares new rules. Paris alone has more free-floating scooter companies than the entire United States, according to a June study, and at least 20,000 whizzing through its historic streets.

Most are app-based, rented scooters that you pick up and drop off wherever you want, and that's especially appealing to tourists and teens. But victims' groups say these users don't know French road rules and can't always be held liable for accidents. One scooter driver has been killed in Paris and scores injured this year.

New rules expected in September will expand those limits to other French cities, and include potential speeding fines up to 1,500 euros ($1,680).

Critics say current proposals don't go far enough. Some want age limits for riders, and to require them to take driving tests and have insurance, so that governments don't have to pay for medical care or other damage they cause.

Last week, city officials in the German capital announced plans for on-street parking zones for the battery-powered vehicles, which are often left haphazardly on sidewalks. Berlin police will also step up patrols to prevent illegal behavior such as doubling.

German police say seven people have been seriously injured and 27 suffered minor injuries in scooter accidents since mid-June, saying most were due to riders behaving carelessly.

While pro-scooter folks say they're a way to cut down on more polluting forms of transport, the anti-scooter faction says they're mainly used by people who would otherwise walk or take public transport anyway.

In the U.K., e-scooters are banned from sidewalks and it is an offense to use them on the roads because they don't comply with laws requiring insurance, taxes and driver testing. Advocates have protested, arguing that it's time for a change in regulations.

Television presenter and YouTube personality Emily Hartridge, 35, became the first person in Britain to be killed while riding an e-scooter when she was struck by a truck in in south London on July 12.

The following day, a 14-year-old boy suffered a head injury after crashing into a bus stop in southeast London.

Electric scooters dot the urban landscapes of major Spanish cities and the official traffic regulator has prepared new guidelines — but their approval hinges on Spanish politicians forming a new national government after a hung parliament emerged from April's national election.

In the meantime, cities have adopted a hodge-podge of restrictions.

Helmets are only mandatory in Madrid for those under 16. Yet they are compulsory for everyone in Barcelona, where a 92-year-old died after she was run over by an electric scooter last year. The rider was investigated for involuntary homicide but was ultimately only fined because of the lack of regulations.

In Madrid, the city requires scooter-users to operate only in roads with no more than one lane per way, while imposing a maximum speed limit of 30 kilometers per hour (18.6 mph).

Seville last week joined the scooter ride-sharing frenzy, but the southern city's rental operator is testing a way to self-restrict rides to and from designated private parking spots.

Brussels — the capital of Belgium and the European Union — has been inundated with e-scooters over the last year.

But each of the 19 municipalities that make up Brussels has its own rules on the vehicles. Some impose fines or speed limits, while others impose parking restrictions.

The Brussels region is now gathering information from all these municipalities to streamline the rules. A city spokeswoman said there has been one deadly accident so far involving e-scooters and a major hospital says it's treating up to two injuries a day related to scooter incidents.

Helmets are not required by law, but debate is swirling around obliging scooter and mono-wheel riders to wear them.

Scooters are allowed in streets — but can't go faster than 30 kilometers per hour (18 mph). In pedestrian areas, e-scooter speeds are limited to just 6 kph (3.6 mph). Now it's up to Italian cities to designate areas and post signs, and establish rules for scooter-sharing businesses.

In the Balkan countries, e-scooters are still operating in a grey zone, except for Slovenia, which is drafting legislation that will restrict them to pedestrian areas and bicycle lanes.

The maximum speed will be restricted to 25 kilometers per hour (15 mph), but in pedestrian zones, electric scooters will have to stay at a walking pace.

They will be subject to same local rules as for bicycles, which means they will have to have lights and helmets will be mandatory for underage riders.