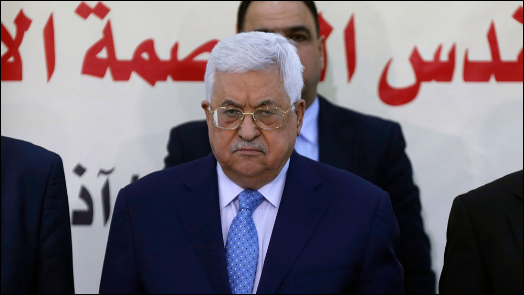 Palestinian President Mahmud Abbas attends a meeting with the Revolutionary Council of the ruling Fatah party in the West Bank city of Ramallah, March 1, 2018.(Photo: VCG)

"Greenblatt's threat will not break out our determination to continue to reject the new upcoming US peace plan in the Middle East, known as the 'Deal of the Century,'" Fatah said in an e-mailed press statement.

These threats will never stop the Palestinians from confronting all the attempts to isolate the Gaza Strip from the entire occupied Palestinian territories, the statement added.

It also highlighted that the Palestine Liberation Organization (PLO) is the only party that has the authority to negotiate on behalf of the Palestinian people.

In an earlier written statement that was published in the media, Greenblatt demanded that "the Palestinian Authority should be part of the solution for the Palestinians in Gaza and Palestinians as a whole."

"If not, others will fill that void," he added.

Meanwhile, Fatah reiterated its objection to reaching a truce agreement with Israel before the end of the internal Palestinian division between itself and the Islamic Hamas movement, which has ruled the Gaza Strip since 2007.

Truce between Hamas and Israel?

Earlier, local news website Palestine Now reported that Yahya Sinwar, Hamas chief in the Gaza Strip, said the prospect of an Egyptian-sponsored ceasefire agreement with Israel will be decided in two weeks.

"In two weeks, the prospect of the calm agreement will be clear and by mid-October, the Palestinian citizens of Gaza will notice the positive changes, if the efforts of Cairo prosper," Sinwar said so during a four-hour meeting with writers and political analysts at his office in Gaza City on Wednesday evening.

Sinwar also threatened that Hamas could "keep the sirens wail in central Israel for six months" if no ceasefire deal is reached.

He also accused Fatah party of "trying to erase the presence of Hamas in the Gaza Strip."