The father of one of the suspects in the murders of an American woman and her Australian boyfriend as well as the death of another man said Wednesday he expects a nationwide manhunt to end in the death of his son, who is on “a suicide mission.” 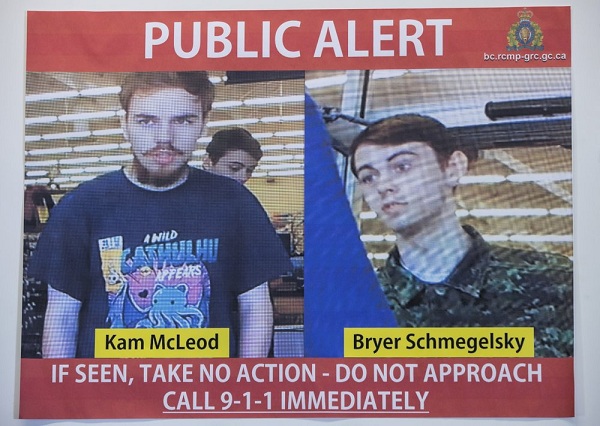 The grim prediction came as Canadian police said they were setting up roadblocks around the remote Manitoba town of Gillam, where the two young suspects, 19-year-old Kam McLeod and 18-year-old Bryer Schmegelsky, recently left a burnt-out vehicle they had been traveling in.

Royal Canadian Mounted Police Cpl. Julie Courchaine said police “are coming from all over” to Gillam, which is more than 2,000 miles away from a region in northern British Columbia where an initial burnt-out vehicle was found last Friday and the three people were apparently killed. 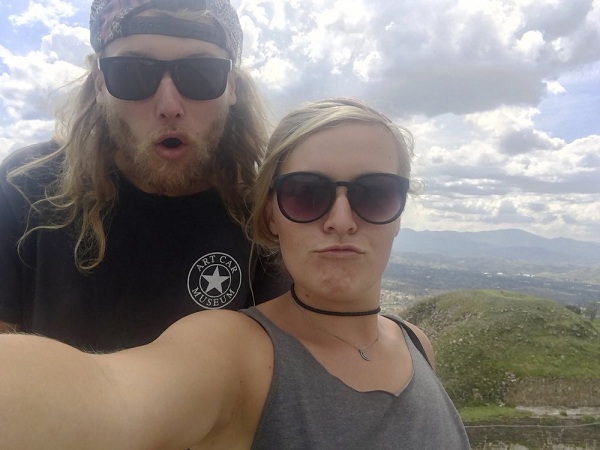 In this undated photo provided by the Deese family of Chynna Deese, 23-year-old Australian Lucas Fowler, left, and 24-year-old American girlfriend Chynna Deese poses for a selfie. The couple were found murdered along the Alaska Highway near Liard Hot Springs, Canada, on Monday, July 15, 2019.

Police initially called the search for McLeod and Schmegelsky a missing persons case. But on Tuesday police announced the young men were suspects in the murders of 24-year-old American Chynna Deese and 23-year-old Australian Lucas Fowler, and in the death of another unidentified man.

Schmegelsky’s father, Alan Schmegelsky, said Wednesday his son had a troubled upbringing and is in “very serious pain.” His son struggled through his parents’ acrimonious split in 2005 and his main influences became video games and YouTube, he said.

“A normal child doesn’t travel across the country killing people. A child in some very serious pain does,” Schmegelsky told Canadian Press in an interview. Alan Schmegelsky said he expects his son will die in a confrontation with police.

“He’s on a suicide mission. He wants his pain to end,” he said, breaking down into tears. "Basically, he’s going to be dead today or tomorrow. I know that. Rest in peace, Bryer. I love you. I’m so sorry all this had to happen.”

Even if his son is caught, his life will be over, the father said. “He wants his hurt to end. They’re going to go out in a blaze of glory. Trust me on this.”

During the investigation of the first burnt out car last Friday, police found the body of an unidentified man roughly a mile (about 2 kilometers) from the car.

It’s about 300 miles (500 kilometers) along remote highways from the spot where Deese and Fowler were found shot dead over a week ago.

Police had said on Tuesday that McLeod and Schmegelsky were traveling in northern Saskatchewan in a grey 2011 Toyota Rav 4. The Toyota Rav 4 is the car found burned in Gillam. Authorities in the neighboring province of Ontario are now warning the public about the suspects.

Residents of Gillam are locking their doors and cars. Deputy Mayor John McDonald said if McLeod and Schmegelsky are wandering around in the bush, they couldn’t have picked a worse time.

“The sandflies came out three days ago and they’re just voracious,” he said. “I’m quite sure they’ll be more than happy to have someone find them.”

The suspects are considered dangerous and police urged the public not to approach them and to call 911. On Tuesday, police released surveillance photos of the two in Saskatchewan.

Police had said Monday the two were traveling to Whitehorse in the Yukon to look for work and had not been in contact with their families for the past few days.

Police were still working to identify the male body that was found nearby their burned-out vehicle, but said he appeared to be in his 50s or 60s. They released a sketch of the man, with a heavy build with a grey beard and grey hair, and asked for public help in identifying him.

The couple had met at a hostel in Croatia and their romance blossomed as they adventured across the U.S., Mexico, Peru and elsewhere, the woman’s older brother said.