Father of US-born woman who joined IS sues over citizenship 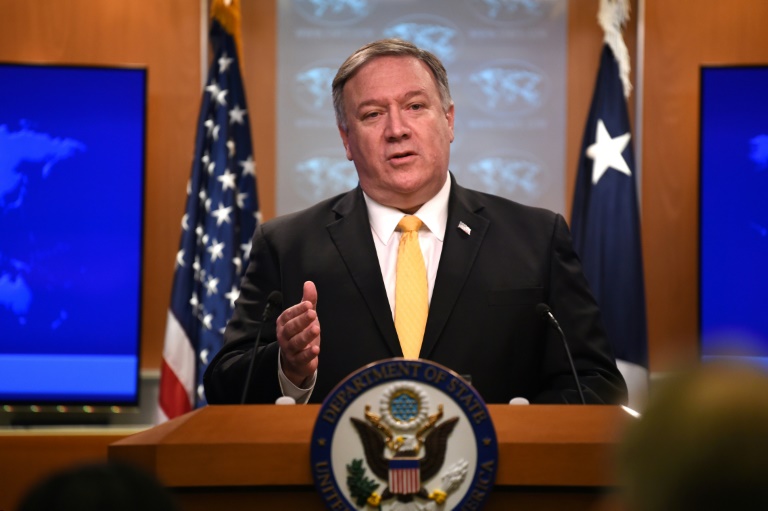 US Secretary of State Mike Pompeo says that the diplomatic status of the father of a US-born woman who joined the Islamic State group means she is not a citizen.(Photo: AFP)

The father of an Alabama woman who joined the Islamic State group in Syria sued Thursday to bring her home after the Trump administration took the extraordinary step of declaring that she was not a US citizen.

Hoda Muthana, 24, says that she regrets joining the extremists and is willing to face prosecution in the United States over her incendiary propaganda on behalf of the ruthless but dwindling group.

A day after President Donald Trump declared on Twitter that he had issued orders to bar her, Muthana's father filed an emergency lawsuit asking a federal court to affirm that his daughter is a US citizen and let her return along with her toddler son, whose father was a Tunisian jihadist killed in battle.

The brewing legal battle hinges on the murky timeline of bureaucratic paperwork in 1994 when Muthana was born and her father, Ahmed Ali Muthana, left a position at Yemen's mission to the United Nations.

The US Constitution grants citizenship to everyone born in the country -- with the exception of children of diplomats, as they are not under US jurisdiction.

"Upon her return to the United States, Mr. Muthana's daughter is prepared and willing to surrender to any charges the United States Justice Department finds appropriate and necessary," said the lawsuit filed with the US District Court in Washington.

"She simply requires the assistance of her government in facilitating that return for herself and her young son," it said.

In the lawsuit, Ahmed Ali Ahmed said he was asked by Yemen to surrender his diplomatic identity card on June 2, 1994 as the Arab country descended into one of its civil wars. Hoda Muthana was born in New Jersey on October 28 of that year and the family later settled in Hoover, Alabama, a prosperous suburb of Birmingham.

The State Department initially questioned Hoda Muthana's right to citizenship when her father sought a passport for her as a child because US records showed he had been a diplomat until February 1995, the lawsuit said.

But it said that the State Department accepted a letter from the US mission to the United Nations that affirmed that he had ended his position before his daughter's birth and granted her a passport.

The lawsuit said that Hoda Muthana was also entitled to citizenship due to her mother as she became a US permanent resident, anticipating the loss of diplomatic status, in July 1994.

Ahmed Ali Muthana additionally asked for the right to send money to support his daughter and grandson, who are being held by US-allied Kurdish fighters at the forefront of fighting the Islamic State militants.

She furtively went to Syria in 2014 when the Islamic State group was carrying out a grisly campaign of beheadings and mass rape and turned to social media to praise the killings of Westerners.

'She's not coming back'

Secretary of State Mike Pompeo, who was named in the lawsuit along with Trump, in a terse statement Wednesday said that Hoda Muthana was not a citizen.

Pompeo did not outline the legal rationale but in an interview Thursday, asked if the key issue was that her father had been a diplomat, Pompeo said, "That's right."

"She may have been born here. She is not a US citizen, nor is she entitled to US citizenship," Pompeo told NBC television's "Today" show.

In a separate interview with the Fox Business Network, Pompeo dismissed the "heart-strings" pitch in Muthana's pleas to return home.

"This is a woman who inflicted enormous risk on American soldiers, on American citizens. She is a terrorist. She's not coming back," he said.

It is extremely difficult for the United States to strip a person of citizenship, a step taken by Britain in the case of homegrown jihadists.

Trump's order on Muthana came even though he is pushing other Western countries to bring back hundreds of jihadists to prosecute at home as the United States prepares to withdraw troops from Syria.