Fauci accepts Biden's offer to be his chief medical adviser 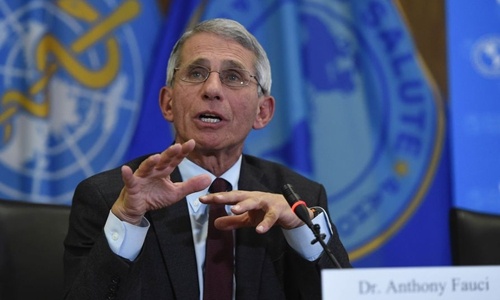 File photo shows Anthony Fauci, director of the U.S. National Institute of Allergy and Infectious Diseases speaks during a Zika briefing in Washington D.C., the United States, on May 3, 2016. (Photo: Xinhua)

Anthony Fauci, a top US infectious disease expert, said on Friday that he has accepted President-elect Joe Biden's offer to be his chief medical adviser.

"Oh, absolutely. I said yes right on the spot," Fauci told NBC's "Today" in an interview.

The confirmation came a day after Biden disclosed he has asked Fauci to be his chief medical adviser and part of his administration's COVID-19 response team.

"I asked him to stay on the exact same role he has had for the past several presidents," Biden said in an interview with CNN on Thursday.

Fauci, who has served as the director of the U.S. National Institute of Allergy and Infectious Diseases since 1984, is also one of the most prominent members of the Donald Trump administration's coronavirus task force.

Ron Klain, Biden's incoming White House chief of staff and the White House Ebola response coordinator during the Barack Obama administration, tweeted on Friday that "it will be a great honor" to work with Fauci again.

Biden has made clear that it will be a top priority for his administration to address the pandemic, which has infected more than 14.2 million people in the United States, with nearly 278,000 deaths.

The Democrat also said on Thursday that he will urge Americans to wear masks for his first 100 days after taking office.

Fauci said on Friday that he has spoken with Biden about the plan, and said it was a good idea.