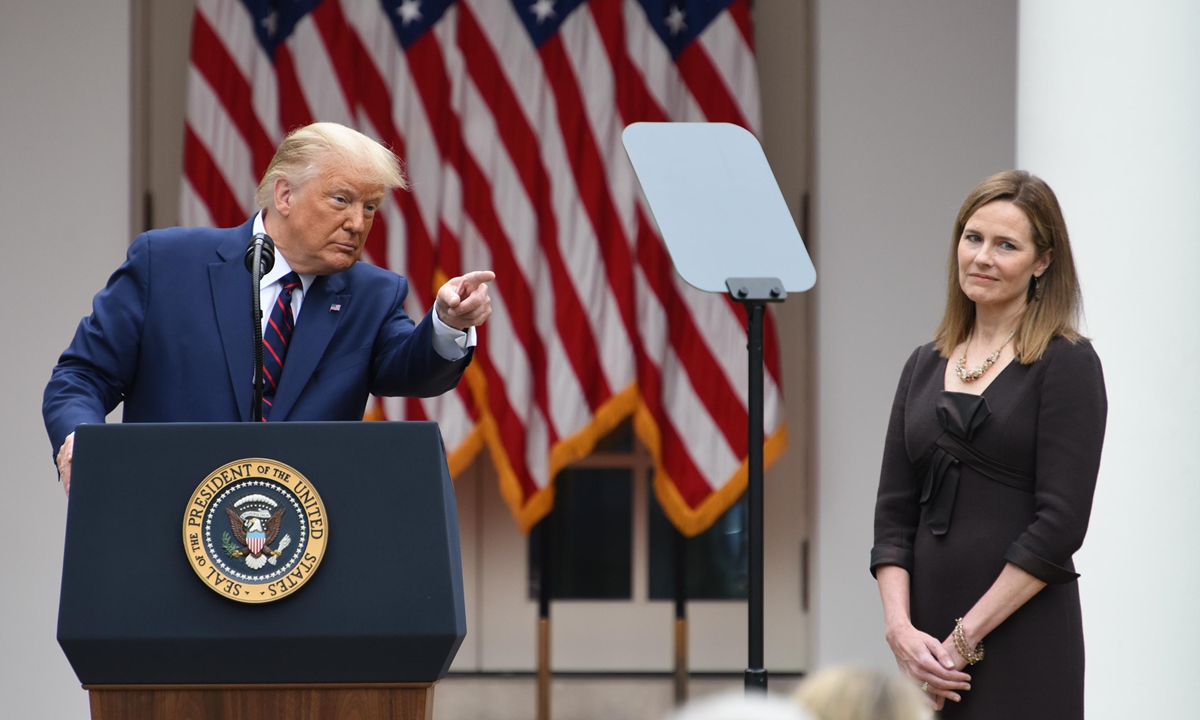 US President Donald Trump announces his US Supreme Court nominee, Judge Amy Coney Barrett (right), in the Rose Garden of the White House in Washington, DC, on Saturday US time. Barrett, if confirmed by the US Senate, will replace Justice Ruth Bader Ginsburg, who passed away on September 18. Photo: VCG

"I think the data speaks for themselves," Fauci, director of the U.S. National Institute of Allergy and Infectious Diseases, told CBS News Radio in an interview. "We had a super-spreader event in the White House and it was in a situation where people were crowded together and were not wearing masks."

The White House held a Rose Garden gathering on Sept. 26, where Trump announced to nominate conservative appellate judge Amy Coney Barrett to replace the late Supreme Court Justice Ruth Bader Ginsburg, a liberal icon. More than 100 attendees sat close to each other at the event while only a small number of them wore masks.

Trump tested positive for COVID-19 on Oct. 1 and was later admitted to hospital before returning to the White House to continue to receive treatment.

Barrett reportedly contracted the virus earlier this year and has since recovered.

The Washington, D.C. health department, as well as jurisdictions in neighboring states of Maryland and Virginia, are calling on people who have worked at the White House in the past two weeks or attended the Barrett event to get tested and contact their local health department for guidance about whether they need to quarantine.

"Given our preliminary understanding that there has been limited contact tracing performed to date, there may be other staff and residents at risk for exposure to COVID positive individuals," the health agencies said in a letter released on Thursday.

Trump has completed the therapy for COVID-19 infection, according to White House physician Sean Conley, who has also medically cleared the president for public events from Saturday. However, the White House has repeatedly refused to disclose when he last had a negative test result.

According to media reports, Trump is expected to hold an in-person event at the White House on Saturday. His reelection campaign announced on Friday that he will attend a rally in Sanford, Florida on Monday, Oct. 12.

During the CBS News Radio interview, Fauci, also a member of the White House coronavirus task force, said that he's certain Trump's doctors will not allow him to leave the White House without further testing.

"I can guarantee you that they will be testing him before they let him go out," the expert said.