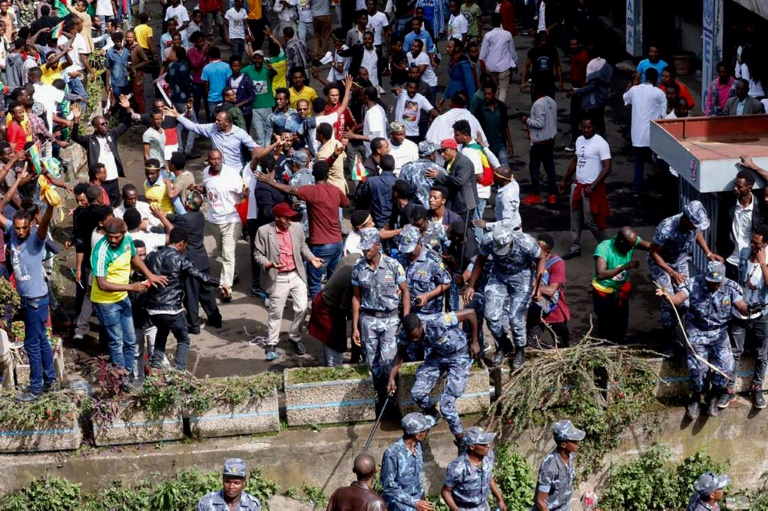 Two people were killed in the blast, which also caused a wave of panic (Photo: AFP)

The US is sending the FBI to help investigate a grenade attack in Addis Ababa which killed two people at a rally addressed by Ethiopia's reformist prime minister, state media said Monday.

A spokesman for the US embassy in Addis Ababa confirmed the FBI's involvement.

On Monday, an AFP photographer saw four people who did not appear to be Ethiopian combing the site of the blast while a US embassy vehicle was parked nearby.

Thirty people have so far been arrested over the attack that took place as Abiy concluded a speech promoting his reformist policies before a crowd of hundreds of thousands in the capital's Meskel Square.

Saturday's explosion sparked panic in the crowd, resulting in a stampede and more than 150 injuries.

There has been no claim of responsibility for the attack.

Rally organiser Seyoum Teshome earlier told AFP he saw police scuffle with a person attempting to hurl a grenade at the stage Abiy had spoken from.

Nine officers have also been arrested for negligence, including the deputy commissioner of the Addis Ababa police.

Since taking office in April, 42-year-old former cabinet minister and army officer Abiy has initiated unprecedented reforms that have been broadly welcomed but have upset the status quo.

He has released jailed journalists and opponents, agreed to cede contested territory to Eritrea, admitted that security forces tortured dissidents and begun to open up the state-controlled economy.

These moves have boosted his popularity among Ethiopians.

But it remains unclear how much support he has within the secretive ruling Ethiopia People's Revolutionary Democratic Front (EPRDF) coalition, which wields absolute power in Ethiopia.